President ‘s goal of cutting the cancer death rate in half will require strides in population-level research and weeding out disparities in care, the head of the National Cancer Institute said.

“That’s a bold, but achievable goal,” NCI Director Ned Sharpless said in an interview. “But if we’re going to reduce mortality by 50% in 25 years, we’re going to have to invest in the science and technologies that will do that.”

The White House is launching a second iteration of Cancer Moonshot, one of Biden’s signature efforts during the Obama administration to double the rate of progress in cancer prevention, treatment, and detection. The institute headed by Sharpless will play a critical role in shepherding the scientific advances that make Biden’s goal possible.

“NCI could not be more central,” a senior administration official said during a media briefing, adding that the White House is pulling together a Cancer Cabinet as the work extends beyond biomedical research. 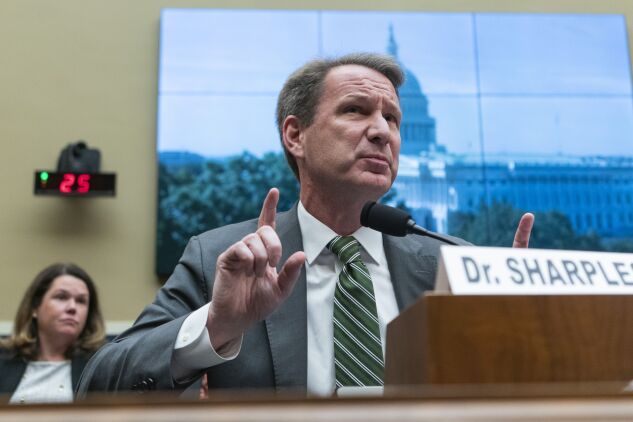 “It reminded me a little bit of a wedding because it’s about 100 of your best friends, and you haven’t seen many of them in a while because of the pandemic,” Sharpless said about attending the White House event to launch the new moonshot. “It was nice to be in person. And then it was just this really celebratory mood.”

The next phase of the moonshot—Sharpless prefers “supercharged” over a “reignited” effort since the 2016 initiative continues to run a robust program—needs to shift toward population-level efforts to develop new and better ways to prevent and screen for cancer, he said.

It could support research, for example, to develop a test that could offer early detection of different cancers at once.

Research efforts targeted at specific communities would also help reduce inequities in cancer care, Sharpless said. “We play a big role in understanding how cancer care is delivered in the real world and how access to care shapes outcomes, and how barriers to care in some cases, worsen outcomes,” he said.

The overall cancer death rate has declined in the U.S., but certain populations continue to get hit harder due to factors such as systemic racism in medicine, poverty, and lack of access to care. Black Americans have higher death rates for many cancer types, and Americans who live in rural Appalachia have higher incidence rates of colorectal, lung and cervical cancers, according to the NCI.

“If we can take populations that have poor outcomes in cancer,” Sharpless said, “and work against those disparities, so that all Americans have similar good outcomes with cancer, as opposed to the stark inequities that exist, that would be a huge effect on cancer mortality at a population level.”

The NCI already runs studies in this area, and will continue pushing the envelope on scientific discoveries that lead to “fantastic medicines that are leading to great outcomes in cancer,” he said.

The original moonshot set up more than 70 consortia or programs at the NCI and 240 research projects. Its goals included breaking down silos that held back research and promoting greater data sharing and collaboration.

“The initial version has, in many ways, been very successful, and is a great set of scientific investigations, Sharpless said.

Advances over the past decades in cutting-edge science such as immunotherapy, which teaches the immune system to fight off cancer cells, and targeted treatments known as precision medicine have led to a record number of approvals in what Sharpless frequently calls the “golden age of cancer research.”

The research and development pipeline for cancer consists of nearly 3,500 potential treatments, which is a 75% increase since 2015, according to a report released last year from health-care research firm IQVIA.

“But we still have a lot of progress to make in cancer,” Sharpless said. “Moonshots are very expensive, and they require significant support.”

It’s unclear how much Biden’s reignited moonshot initiative will cost. There’s about $400 million of unallocated cancer moonshot funding from the 21st Century Cures Act, but Sharpless said money will largely support initiatives that are already in the works.

He noted that the seven-year, $1.8 billion special fund dedicated for the original cancer moonshot through Cures got underway just as he joined the institute in fall of 2017.

The senior administration official said they aren’t releasing a funding figure yet in part because they’re still “listening and expanding the circle for ideas.” Sharpless said both the Cancer Cabinet and the president’s budget proposal will offer more insight into what that figure will be.

The NCI’s budget is currently about $6.5 billion. The American Association for Cancer Research asked congressional appropriators Feb. 3 for a $432 million increase for fiscal 2022.

“At this point in the process, it is difficult to break down the funding that is required for the Cancer Moonshot project by project,” Jon Retzlaff, AACR’s chief policy officer, said in an emailed statement.

“Bottom line, we are going to need robust, sustained, and predictable funding increases for the next many years to accomplish the goals that President Biden has specified,” Retzlaff said, including “a significant budget increase for cancer research in the President’s FY 2023 budget proposal.”

Sharpless expressed optimism that Congress will dole out the support cancer research needs.

“The first moonshot was one of the most successful bipartisan pieces of legislation in recent memory. And since I’ve been at the NCI, essentially every member of Congress I’ve spoken to has told me they think cancer research is a good use of federal money,” he said.