People participate in a rally and march against Covid-19 vaccine mandates on Sept. 13, 2021, in New York.
Photographer: Spencer Platt/Getty Images

Prior litigation over emergency health and safety regulations and executive orders for federal contractors gives clues to how courtroom battles may unfold over the Biden administration’s latest bid to boost Covid-19 vaccination rates.

President last week directed the Occupational Safety and Health Administration to develop an emergency temporary rule on employer vaccination requirements, which would also include an option for workers to get tested regularly instead of getting a shot.

Biden also said federal contractors will have to follow to-be-determined guidelines formulated by the White House’s Safer Federal Workforce Task Force, which will presumably include a vaccine mandate.

OSHA emergency standards and some contractor executive orders have had poor litigation track records—with the former seeing five out of six losses in court challenges. But attorneys and academics say the past might not necessarily be prologue for the Biden administration’s move to throw its weight behind increasing vaccination rates in the face of infections fueled by the more contagious delta variant.

Although OSHA has issued 10 emergency temporary standards, a rule ordering employers with 100 or more employees to mandate the shot or regular testing would break new ground.

“This is certainly the first time that OSHA has mandated vaccination,” said Melissa Peters, a Littler Mendelson P.C. attorney who previously worked for California’s workplace safety agency. “It’s a bold statement, and I can’t believe they actually did this.”

Texas, Florida, Ohio, Arizona, and at least 13 other states have already threatened to sue over the rule to require workplace vaccination mandates, which will likely take OSHA several weeks to complete.

Federal appellate courts—including the U.S. Court of Appeals for the Fifth Circuit, which heard half of the six legal challenges to OSHA emergency rules—have rigorously reviewed the federal safety agency’s emergency regulations. The lawsuits were filed by industry groups, such as the American Petroleum Institute, Asbestos Information Association, and Dry Color Manufacturers’ Association, and in some instances individual companies.

“Courts have been very skeptical of emergency temporary standards in the past because they bypass so much of the rulemaking process,” said Dori Goldstein, an employment law analyst at Bloomberg Law. “With the availability of other safety precautions—like remote work options and vaccine incentives—OSHA will have a tough time proving that a vaccine mandate rule is necessary.” 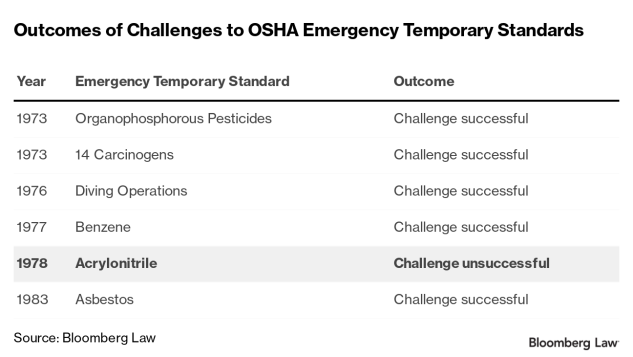 OSHA’s emergency rule to reduce workers’ permissible exposure limit to the toxic chemical benzene by a magnitude of 10 failed because the agency didn’t show it was necessary. The agency didn’t provide an estimate of the benefits of the lower exposure level that was crucial to proving the rule was needed, the Fifth Circuit said in its 1978 ruling.

OSHA also must meet a high bar to justify emergency rules by showing they’re necessary to safeguard workers from a “grave danger.” Standards issued via its normal—and very lengthy—rulemaking process are supposed to protect workers from a “significant risk.”

Three of the five OSHA emergency rules that courts struck down failed to meet that grave danger standard.

The agency’s emergency rule on organophosophorous pesticides fell because of weaknesses in the agency’s scientific data. Ultimately its evidence showed that the pesticides sickened just “a few farmworkers” compared to the “mass of agricultural workers in contact with treated foliage,” the Fifth Circuit said in its 1974 ruling.

OSHA appears to have a strong argument that an emergency standard on employers mandating Covid-19 vaccination or testing passes legal muster given that the disease is contagious, can be deadly, and the risk of further infection expands with every transmission, said Aaron Saiger, an administrative law professor at Fordham University.

But challengers could plausibly argue that the regulation should be blocked because most people recover from Covid-19 and breakthrough infections among the vaccinated show that the rule might not work, Saiger added.

The Obama administration was sued by a trade association in 2016 over an executive order that required federal contractors to disclose their labor and employment law violations. The Associated Builders and Contractors contended the “Fair Pay and Safe Workplaces” order exceeded the government’s procurement authority, and either violated or was preempted by other labor and employment laws.

A federal judge in California blocked Trump’s training order, and a Texas federal judge temporarily froze Obama’s order. Eventually, both mandates were rescinded by the next White House occupant—Trump rolled back the latter and Biden nixed the former—rendering the lawsuits moot.

Lawrence Lorber, counsel at Seyfarth Shaw LLP and a former Labor Department official, said the Obama- and Trump-era orders are different from Biden’s order, and attacking it in court may be more daunting.

A legal challenge of the order should assert in some manner that businesses that work with the government cannot be compelled, as a condition of the contract, to ensure that workers be vaccinated, said Lorber. That being said, it’s “difficult to see where such a requirement would violate or contradict another federal law.”

While it may be challenged, it’s unlikely an argument against the order will be successful, according to Lorber.

“The Order is not inconsistent with any federal law that I am aware of,” he said.

—With assistance from David Yaffe-Bellany