President moved to make it easier for Americans to buy health insurance during the pandemic, reopening the federal Obamacare marketplace with an order Thursday that’s a step toward reinvigorating a program his predecessor tried to eliminate.

The president said the orders aimed “to undo the damage” from Donald Trump’s administration.

“There’s nothing new we’re doing here other than restoring the Affordable Care Act and restoring the Medicaid to the way it was before Trump became president, which by fiat he made more inaccessible, more expensive and more difficult for people to qualify for either of those two items,” Biden said.

The Obamacare executive order creates a special enrollment period for plans sold in the federal Healthcare.gov market from Feb. 15 to May 15, offering a path to health care for people who’ve found themselves without insurance coverage after losing their jobs. The order also directs agencies to look for ways to strengthen Medicaid, the federal health program for low-income people, and the Affordable Care Act more broadly.

“I’m not initiating any new law, any new aspect of the law,” Biden said.

Shares of health insurers and hospitals rose following the announcement, with , , and up more than 3% at 2:00 p.m. in New York, out-pacing the broader market.

The long-expected executive orders build on more than two dozen Biden already has signed during his first week in office.

“As we continue to battle Covid-19, it is even more critical that Americans have meaningful access to affordable care,” the White House said in a statement. “Reliable and affordable access to health insurance doesn’t just benefit families’ health; it is a critical source of economic security and peace of mind for all.”

Democrats, the health insurance industry and advocates for the Affordable Care Act had repeatedly asked the administration over the past several months to reopen HealthCare.gov enrollment, which is typically restricted to a few weeks in the fall. They were refused.

The Trump administration argued that people who lost their coverage in the pandemic could sign up for Obamacare plans using individual special enrollment periods. Requests for special enrollment have spiked, but the process is more complicated than open enrollment because it requires applicants to prove their eligibility. It’s also not available to people who’ve been uninsured for an extended period of time.

The new enrollment period Biden is creating will be available to “Americans that need health care coverage,” according to the statement, which did not say whether there would be restrictions.

America’s Health Insurance Plans, the trade group for health insurers, welcomed the announcement. The executive order will “create more pathways for Americans to obtain coverage that is so essential to their health, well-being and peace of mind,” AHIP Chief Executive Officer said in a news release. 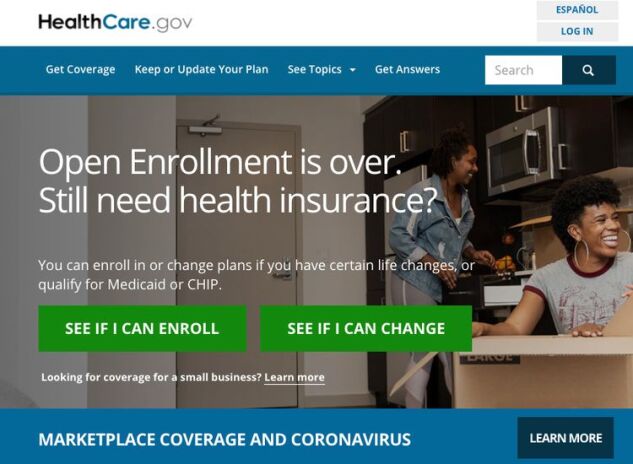 Enrollment in plans sold by marketplaces set up under the Affordable Care Act declined slightly under President , who cut funding for the program’s marketing and outreach after promising to repeal the law.

“President Biden has an opportunity to show that Healthcare.gov can work in concert with the 15 state-based marketplaces to offer a critical safety net for those left uninsured by the pandemic,” said of Manatt Health, who was the first director of Healthcare.gov.

Trump’s efforts to repeal the Affordable Care Act failed in Congress, and the insurance marketplaces it created continued to enroll millions of people during his presidency. He occasionally claimed credit for lowering premiums for plans sold on the exchanges.

About 8.3 million people enrolled last fall using Healthcare.gov portal, about the same number as the year before even though two states -- Pennsylvania and New Jersey -- exited the federal marketplace to run their own, according to the Centers for Medicare and Medicaid Services.

For states using Healthcare.gov, the official window to enroll in coverage for 2021 closed on Dec. 15. Opening a new enrollment period, combined with more robust efforts to reach the uninsured, could bolster enrollment significantly: 4 million people who are currently uninsured qualify for a fully subsidized low-level plan with zero premiums, according to a new analysis from KFF.

Another 4.9 million are eligible for partial subsidies, the group estimates.

Health insurers are looking forward to a possible lift for the marketplaces, after they sometimes struggled to attract new customers.

“The new administration certainly looks like they’re going to promote” the ACA business, said , who leads the commercial and specialty business at health insurer Anthem.

“We just heard this week that we’ll likely see an extension to open enrollment or special enrollment periods throughout the year,” Haytaian told Wall Street analysts on an earnings call Wednesday. “With the new administration, I think there is an opportunity for further growth there.”

Most of the 15 Obamacare marketplaces operated by states extended their open enrollment periods as a result of the pandemic. Those states saw a surge of new applicants — particularly among people in their 20s — suggesting that Americans who once chose to go without coverage are reconsidering, given the risk of coronavirus infection.

The Mexico City Policy that Biden rescinded Thursday flip-flops depending on which party holds the White House. It was reimposed by Trump when he took office, after President had rescinded it.

A Biden memo ending the policy directs the Department of Health and Human Services to consider rescinding unspecified regulations governing grants to family-planning organizations, according to the White House statement. The Trump administration enacted regulations that prohibit family-planning groups receiving the grants from referring women for abortions or physically sharing space with abortion providers.