Baby food in stores throughout the US contains heavy metals in amounts that can lower children’s IQs and cause developmental problems. The Food and Drug Administration has known about the problem for years, but even after a 2021 Congressional investigation that resulted in two damning reports, little has changed.

Bloomberg Law purchased 33 baby food products in stores and online and mailed them to a laboratory to be tested for heavy metals. The results? All but one of the products contained at least two of three heavy metals: lead, arsenic, and cadmium.

Read The Full Investigation: Baby Foods With Toxic Metals Stay on US Market While FDA Dithers

It seems like a simple thing, to feed babies foods without heavy metals that can hurt their development. But the reality is, it’s complicated.

Much of the contamination comes from the environment. Fruits, vegetables, and other plants, especially rice, absorb the metals as they grow. Heavy metals can be reduced by planting in soil that is low in metals, using irrigation systems, and selecting specific crop varieties. 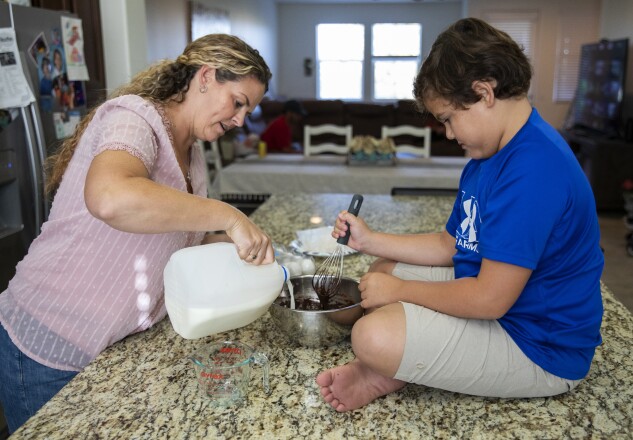 Noah Cantabrana, who was diagnosed with autism as a toddler, bakes with his mother, Melissa Cantabrana, in their California home. Noah’s family is suing baby food companies for allegedly exposing him to heavy metals.
Photographer: Alisha Jucevic/Bloomberg

The FDA started a program called Closer to Zero in 2021 to address the issue. So far the agency has released only drafts of guidelines around lead in juice products and has blown past its own deadlines for lead guidelines for other baby foods. And ultimately, the agency is not issuing strict regulations, only guidances, which make enforcement optional.

“The FDA has for a generation failed to treat heavy metals in baby food as a priority,” said Scott Faber of the Environmental Working Group.

Bloomberg Law tested products from nine companies. Some of the companies released statements asserting their commitment to complying with the FDA, and others said they take steps to eliminate heavy metals from their products.

To contact the reporters on this story: in Washington at gharki@bloombergindustry.com