The momentum in health-care industry transactions activity keeps building as the year moves on, with August being one of the busiest months.

There were over 150 deals announced or closed, compared to 103 deals during the same month in 2018, according to a list of select transactions prepared for Bloomberg Law by investment bankers at ECG Management Consultants.

The 900 deals listed in 2019 so far reflect “an ongoing and steady uptick” in activity that is expected to continue through December and for several more years to come, Gary W. Herschman, a transactions attorney at Epstein Becker Green, Newark, N.J., told Bloomberg Law.

No slowdown is expected going into the last quarter of the year, Hector M. Torres, a principal at ECG in Chicago, told Bloomberg Law. Some experts are even saying a national recession wouldn’t impact health-care deal volume, Herschman reported.

The health-care information technology sector surged in August, with 22 deals, ECG’s Christopher McGuine told Bloomberg Law. This pushed yearly activity in this sector to over 100 deals, up significantly from the same time a year ago, he said.

Herschman expects the trend to continue. He predicted the total number of transactions in this sector could reach 200 by the end of 2019. 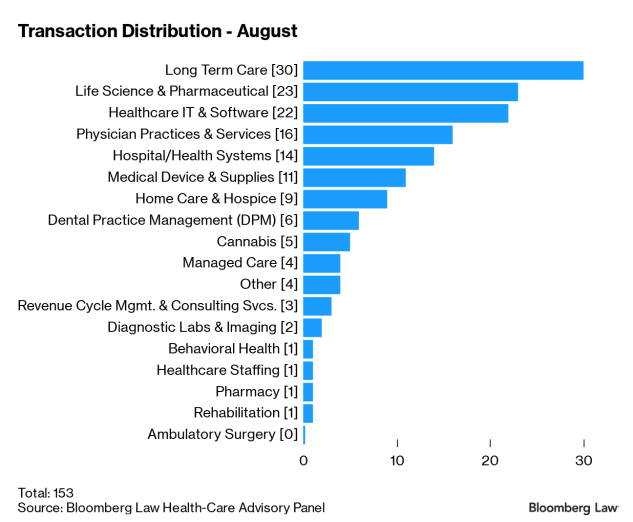 Some of this activity is being driven by private equity platforms like Warburg Pincus and Soros Capital, which made significant investments in software developers in August, McGuine said.

Health IT is a popular sector for dealmaking because enhanced IT platforms and data analytics tools are helping health-care providers reach their goal of providing cost-effective, quality care, Herschman said.

Long-term care continued its deal dominance in August, with 30 deals announced or closed during the month. Add in the home health and hospice care sector transactions, and deals in the long-term care continuum have nearly reached the 250 mark in 2019, Herschman said.

Providing cost-effective care to the growing elderly population “is the focus of just about every health-care industry player,” he said.

There have been an average of 16 physician deals every month, and the number of transactions in this sector easily should top 200 by 2019’s end, Herschman said. “Physicians believe being part of a larger, well-capitalized organization will be crucial to future survival and success in the changing competitive landscape,” he said. 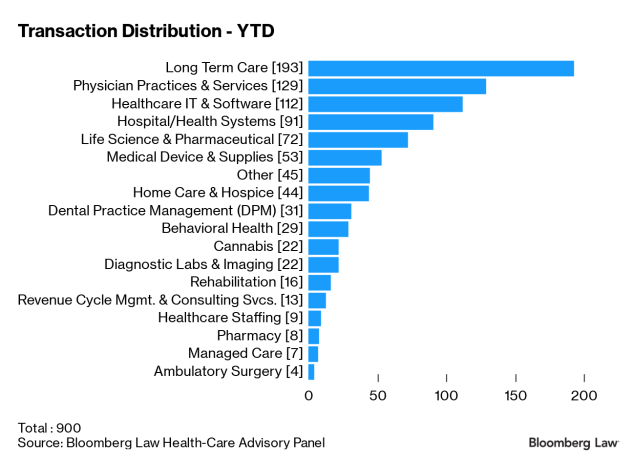 Dental and oral surgery practices were especially hot in August, with six of the 21 recorded deals, ECG’s Nicholas Davis told Bloomberg Law. One of those deals will create the first transatlantic dental group, he said.

United Kingdom-based Colosseum Dental Group, which is backed by investment company Jacobs Holding, signed a definitive agreement to acquire North American Dental Group for $660 million, Davis said. NADG is one of the fastest-growing dental services organizations, with over 200 dental practices throughout the U.S., he said.

Consolidation in the hospital and health system sector has been a key theme this year, Torres said. August’s highlights include the merger of Georgia’s Northside Hospital and Gwinnett Medical Center. This will create a five-hospital system with more than 250 outpatient facilities and over 3,500 physicians serving the metropolitan Atlanta area, he said.

Most of August’s hospital deals were of the “add-on” variety, as existing systems picked up additional facilities, Herschman said. But he expects to see several system-to-system mergers over the next 24 months, resulting in more and bigger regional and national health systems, he said.
_________