Arizona Gov. Doug Ducey changed course on Wednesday and gave cities and counties the power to require that people wear masks to slow the spread of the coronavirus as cases surge in the state.

Ducey’s executive order came after leaders across Arizona pleaded in recent days for more authority to address the lax social distancing they have noted since the end of the state’s stay-at-home order on May 15. Ducey’s previous executive orders limited local governments from imposing coronavirus policies more restrictive than state directives.

Ducey (R), who has rebuffed calls for a statewide mask mandate, said the state’s rising case numbers and hospitalizations are “concerning” and said he agreed that local officials need the ability to enforce that people wear masks. Arizona added 1,827 new coronavirus cases on Wednesday.

“There is a trend (in the number of cases) and the trend is headed in the wrong direction,” Ducey said. “We’re going to make the proper adjustments so that we can have successful results going forward.” 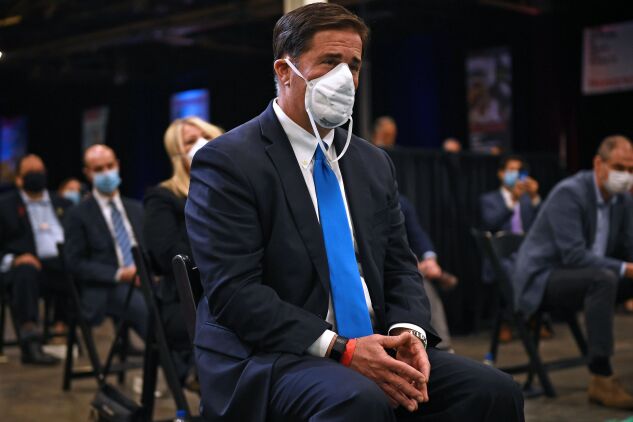 Ducey announced several other initiatives Wednesday to address Arizona’s rising coronavirus cases and hospitalizations, including that:

Ducey, who arrived at Wednesday’s news conference wearing a mask, reversed his position that leaving mask policies to the state would be clearest for residents. He said June 11 “that the government closest to the people is best, except in a global pandemic.”

On Wednesday, though, the governor said that a localized approach makes sense given the wide-ranging impact of the coronavirus in different parts of the state. Areas along the southern border have been hit harder than other parts of Arizona, he said.

“This allows local leaders to tailor policies,” Ducey said, and cities will deal with their own penalties and enforcement.

Phoenix Mayor Kate Gallego on Twitter called the move “a needed step to allow cities to protect residents.” The Phoenix City Council will vote at its next meeting to require masks when people go to public spaces and essential businesses, she said, without providing a date.

Mayors of the cities of Tucson, Tolleson, and Flagstaff tweeted before Ducey’s announcement that they had directed their city attorneys to add mask requirements to local emergency proclamations. Tucson was looking for statewide direction but moved forward on a policy in the absence of action by Ducey, said Nate Sigal, senior policy adviser for Mayor Regina Romero, before the executive order.

Tucson’s requirement likely will have an enforcement mechanism that starts with education, Sigal said. Mask-wearing is a simple way to slow the spread of the virus, he said.

“The push is what science and public health experts are telling us,” Sigal said.

Hundreds of physicians signed an open letter to Ducey on June 14 calling for stronger coronavirus protections, including a mask requirement. Some local businesses implemented their own rules in recent days following confirmed Covid-19 cases at their establishments.