More than a dozen SPACs this year have needed extensions to file their year-end reports, and many ran into accounting errors serious enough to formally correct past results with the SEC, Bloomberg data show.
Photographer: Al Drago/Bloomberg

Smart glass maker View Inc. in early March told the market it would miss the deadline to file its annual 10-K. By the end of the month, its problems mounted. It wouldn’t have its regulator-required financial statement ready until May, so it could have time to formally correct significant errors in past financial statements.

Mistakes in how it underreported liabilities for customer warranties would force it to restate its 2019 and 2020 10-Ks as well as the first quarter of 2021, the window maker said.

View is part of a subset of companies that have drawn increased regulator scrutiny in the past year: those that went public via a special purpose acquisition company, or SPAC. Financial reporting is one part of the scrutiny. This year, 13 SPAC-related companies to date have needed extensions to file their year-end reports, and 10 ran into accounting errors serious enough to formally correct past results, Bloomberg data shows.

View stands apart, however, for its financial reporting woes. The company, which went public through a merger with a blank-check company in 2021, also missed two quarterly filing deadlines the same year it hit the public market and now faces getting delisted from Nasdaq. It said in November that its audit committee was investigating how the company recorded liabilities related to 10-year customer warranties for glass defects. The company won’t have any other material errors to report, it told Bloomberg Tax.

While View’s financial reporting issues are more significant than the others, late filings and accounting errors for freshly minted public companies don’t surprise market watchers. The primary appeal of going public via merger with a SPAC is the speed it offers compared with the traditional initial public offering process. But that rush to the market, plus complex financial reporting requirements, increases opportunities for slip-ups.

“At the base of most of this is you’re trying to do too much with too little time with too few resources,” said Dane Dowell, director at Johnson Global Accountancy. 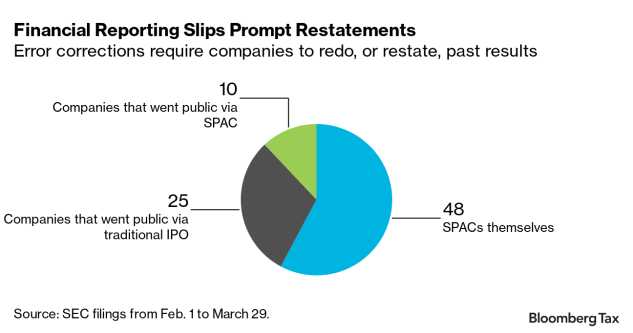 The majority of companies that have gone public via SPAC filed their annual financial statements on time.

The majority also reported no accounting errors. But regulators are paying close attention to all things related to SPACs. The Securities and Exchange Commission plans to issue a proposal Wednesday to curb some of the practices that have led to SPACs making unrealistic financial projections.

Just under one-third—10 out of 35—of the operating companies that said they would have to restate as of Feb. 1 were companies that went public via SPAC.

The figure doesn’t include the blank-check vehicles themselves. Forty-eight SPACs—shells formed with the sole purpose to raise cash and find a promising private company to take public via merger—announced they had to restate over problems related to classifying equity, a pervasive error that has made hundreds of SPACs announce restatements since the fall. Together, SPACs and companies that took the SPAC path to public market make up 70% of all restatements since Feb. 1, Bloomberg data shows.

Eight of the 13 companies that went public via SPAC told the market that they needed more time to finalize their confidence in their assessments of internal controls—systems and processes to ensure financial statements are correct—before completing their 10-Ks.

Tattooed Chef’s accounting trip-up was due to a complicated tax accounting issue related to its issuance of shares when it merged with the blank-check company that took the business public. The company declined to comment.

“There’s no effect to operations, no effect to cash, no effect to revenue,” Tattooed Chef CFO Stephanie Dieckmann said at a conference on March 14, addressing an investor question about the restatement. “It is all a tax expense.”

Cano ran into problems about the timing in which it recorded revenue related to Medicare patients. The company reported adjustments to certain types of revenue when doctors saw their patients, but it was supposed to recognize it in the period of collection, the company said in its earnings call. The change shifted the timing of recording revenue, but not the amount of revenue itself.

This error with what’s called Medicare risk adjustment revenue meant the company had to restate the first three quarters of 2021 within its 10-K. The company declined to comment.

Regulators warned about financial reporting requirements for companies going public via SPAC at the height of the blank-check boom in early 2021. The time-consuming and complex accounting and governance questions that arise in traditional initial public offerings also apply to companies that go public through the faster route, the SEC’s top accountant advised.

A private company may spend years preparing for a traditional IPO, gearing up for major changes to business-wide functions and establishing processes to mitigate risks related to regulatory requirements, increased attention from the press and analysts, fluctuations in market value, or potential shareholder action, SEC acting Chief Accountant Paul Munter said in March 2021.

Some companies acknowledged the challenges in their 10-Ks.

“Since becoming a public company, ensuring that we have adequate internal financial and accounting controls and procedures in place to provide accurate financial statements on a timely basis has become a costly and time-consuming effort,” PLBY Group disclosed in its annual filing.

U.S. accounting rules, SEC filing requirements, and public company audit regulator standards are complex to master in a short period. Companies that went public via SPAC and found themselves for the first time qualifying as large accelerated filers—a class of major public companies that have earlier filing deadlines—can get particularly tripped up.