The U.K.'s major accounting firms have low equity levels, because most profits are distributed to partners.
Photographer: Jason Alden/Bloomberg

The major U.K. accounting firms could struggle to weather the impact of the pandemic or a big legal claim because they distribute most of their profits to their partners, leaving little money in reserve.

Accounts filed by the U.K. arms of the six biggest firms—the Big Four, BDO LLP and Grant Thornton LLP—show very low levels of equity, in some cases less than a month’s revenue.

That raises questions about their ability to pay fines that could result from some of the larger court cases being brought against them, such as the 250 million pound case a government bankruptcy manager intends to bring against Carillion Plc’s auditor, KPMG LLP. And some firms have been laying off staff and imposing partner pay cuts to offset the Covid-19 slowdown in business.

“These are hollowed-out firms,” Richard Murphy, an economics professor at City University and a co-founder of the international group Tax Justice Network, said.

“Not all equity is created equal; some equity will be quite useless to meet liability claims,” Karthik Ramanna, professor of business and public policy at the Blavatnik School of Government at Oxford University, said in an email. Equity shows the value of the partners’ stake in the firm, and so low levels mean they have taken most earnings out of it.

“Big fines have not been part of the game thus far, so I won’t be surprised if the firms are underequipped for such fines. That said, it is in no one’s interest to have any fines structured in such a way as to bankrupt the firms,” Ramanna said.

Two of the Big Four firms appear to have only modest equity levels for their size. 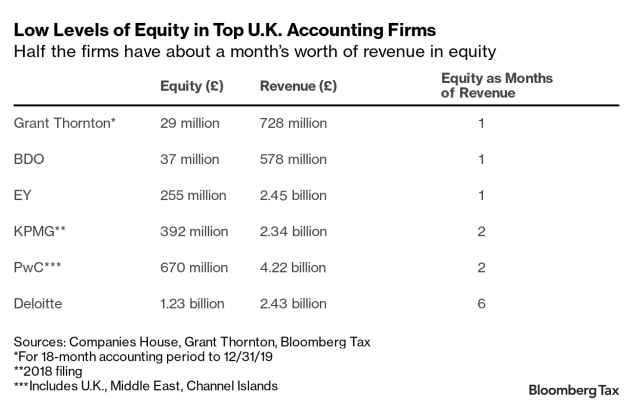 “Equity values are low because the partners have taken the money out,” James Peterson, a lawyer and former partner at accounting firm Arthur Andersen, said by phone, adding that this created uncertainty over whether they had sufficient reserves to cover some of the big claims brewing against them.

Petersen was a senior in-house counsel at Arthur Andersen until 2001, shortly before the firm’s collapse after the Enron Corp. scandal, and now runs his own law firm as well as commentating on accounting matters.

Certainly, the bulk of profits are paid out to partners, rather than being tucked away into reserves. EY, for example, reported a profit of 505 million pounds in 2019. Of this, 477 million pounds, or 94%, was earmarked for the partners.

“It’s a sword hanging over them,” Peterson said. “You can’t know if KPMG could pay the 250 million pounds for Carillion, because they don’t publish their level of indemnity cover—the Big Four are self insured,” he said, questioning the level of insurance cover that the firm had to pay a proposed court claim against KPMG by the Official Receiver, the government official who manages parts of the bankruptcy process in the U.K.

The Official Receiver alleges that Carillion’s board paid out 250 million pounds in dividends and advisory fees because it believed the company was sound and profitable as a result of a negligent KPMG audit.

“However, one lesson from Andersen’s collapse is that the partners will get out if they face too big a financial hit,” Peterson said. Andersen collapsed after being convicted of obstruction of justice in 2002 over its Enron audit, although the conviction was subsequently overturned.

Peterson pointed to several cases in the U.S. that could have caused financial problems for the big firms if they had escalated, such as a judgment against PwC as auditor of the collapsed Colonial Bank. PwC eventually agreed to a settlement of $325 million in 2019 after a judge had awarded damages of $625 million the previous year.

The firm settled out of court for $55 million in 2016 on charges in connection with the Bernie Madoff Ponzi scheme. And PwC is under scrutiny by the Public Company Accounting Oversight Board for its role in what Mattel Inc. acknowledged late last year as “material misstatements.”

In connection with the Mattel situation, public employee pension systems have filed a class action against the toy company and PwC in U.S. District Court in Los Angeles.

“The big problem in the U.S. is over class actions, which could easily reach an unaffordable amount,” Peterson said. “You’re starting to see them in Europe and they’re just around the corner in the U.K.” He listed several high-profile U.K. auditing scandals as examples of where auditors could face massive claims, including EY-audited Thomas Cook and NMC Health Plc.

Murphy echoed Peterson’s point and added that reserves were so low that some of the firms could also struggle to meet expenses from the coronavirus lockdown: EY’s U.K. revenue was 2.5 billion pounds in 2019, for example, meaning that its 255 million pounds of equity translates into little more than a month’s turnover.

“The Big Four have already announced some cuts and the next stage will be layoffs,” Murphy said. “Look at the challenger firms, and they have very little in reserve to cover this sort of event.”

Grant Thornton and the Big Four declined to comment, but BDO said in a statement that its reserves totaled 168 million pounds, a figure that includes 166 million pounds owed to its members, or partners. It wouldn’t say how much indemnity insurance it had, citing commercial confidentiality.

After a recent expansion drive BDO had the second-highest number of U.K. stock exchange listed clients in May, according to the research firm Adviser Rankings. In the June 4 statement, it acknowledged there were questions about the risks it now faced as a large company auditor.

BDO said that claims would be covered by insurance. However “in the long-term, a firm’s profits and reserves could be adversely impacted should it face a hefty claim.”