The logo of General Electric is featured on a banner in Plant 23 at the GE Aviation Engine Services facility in Singapore.
Photographer: Ore Huiying/Bloomberg via Getty Images

Unraveling the finances of a conglomerate such as General Electric Co. isn’t as simple as dividing by three as the company looks to spin off its energy and health-care businesses from its core operations.

The wholesale removal of significant portions of the industrial giant’s portfolio will ripple throughout GE’s financial statements, hitting cash, earnings, debt and assets. Deconstructing a streamlined set of financials for an aviation-focused GE, plus drafting financial reports for two newly minted public companies, will be no small feat.

“It really is a huge task and a huge lift to try to separate big companies from one another,” said Ann Gittleman, managing director in Kroll LLC’s expert services practice. “You have to understand with precision who’s taking what assets and the like.”

GE and Johnson & Johnson each announced in November plans to spin off substantial portions of their businesses over the next few years. Such large corporate breakups are relatively uncommon—recent examples include United Technologies Corp., which split off Otis Worldwide Corp. and Carrier Global Corp in 2020, and eBay Inc., which spun off PayPal Holdings Inc. in 2015. 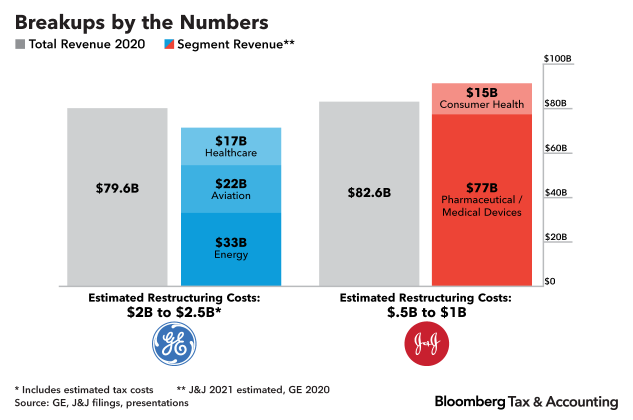 More companies are expected to take advantage of a roaring deals markets and a buoyant stock market in 2022 and part ways with substantial operations in hopes of creating more focused, nimble companies that aren’t weighed down by historic debt or other obligations such as environmental or litigation liabilities.

The long time frames both companies announced to complete the first spinoff—nearly a year for J&J’s consumer health division and 2023 for GE’s health-care business—reflect in part the complicated tax and accounting tied to the restructuring.

Here’s a look at four accounting challenges GE and J&J—and perhaps other companies that may weigh similar breakups—will face as they prepare to send large portions of their business off on their own.

Both corporate titans will have to decide what products and intellectual property the spinoffs will take with them after the separation—plus revenue or debt payments tied to those operations.

An army of accountants, valuation experts, and other specialists will work behind the scenes to tease out everything from pension liabilities to the value of equipment and patents to help build a set of financial statements for what will be multiple newly public companies.

“When there’s corporate separations, everybody just sort of takes what’s theirs and moves on,” Gittleman said.

That could vary depending on how the deal is structured, she added.

A shared production facility or a loan that paid for the equipment inside can’t be separated in reality—someone has to take ownership of the asset and the debt, she said.

“You’re not going to split the machine in half,” Gittleman said. “One company is going to have to take ownership of that piece of equipment. And will they owe the other company money as the result of doing that?”

The new companies also will divvy up costs once shared at the corporate level, such as advertising and employee benefits.

In some cases, the time-consuming work may involve an invoice-by-invoice review to parse which portion of the expense or revenue relates to the carve-out. The companies will have to document the reasons for those allocations, said Michael Yachnik, a CPA and partner with consulting firm StoneTurn Group LLP.

“All these costs that support the entire business, the parent and all the subs, has to somehow be allocated out to these spinoffs. And that’s where the time and the effort really is needed, and that’s why you see these kind of long periods” between the announcement and the completed spinoff, Yachnik said.

J&J and GE estimate that their corporate breakups could cost between $500 million and $2 billion apiece, or more.

GE told analysts that its estimate reflects the legal, audit, and IT costs to separate its core businesses, while tax costs could tack on another $500 million. The company also said it would retain certain assets and liabilities of the existing company, including those relating to its insurance operations.

GE told Bloomberg Tax that it would keep investors informed over the coming year and declined to say which outside accountants or specialists would support its transition work. J&J similarly said it would adhere to SEC requirements and update investors throughout the transition.

U.S. accounting standards require companies to record those costs as they are known and to disclose what they cover, such as valuation specialists and severance costs for layoffs, Yachnik said.

Restructuring costs also might reflect write-downs for brands that have lost their luster or for outdated equipment, said Zivia Sweeney, associate accounting professor at USC Marshall, whose past corporate roles included chief financial officer and controller.

“It’s almost making your books clean on a go-forward basis or whatever else,” Sweeney said. “You are not dealing with those past accounting issues or transferring them to your brand new companies.”

Both companies told analysts they intend to set up the companies with healthy balance sheets that will be attractive to investors.

Unlike a bankruptcy restructuring that enables companies to write off or pay down their debts, companies might face limits on how much debt can be wiped away through a separation, Gittleman said.

Debt generally follows the appropriate party, but some inter-company debt could be forgiven as part of the breakup, Yachnik said.

With a smaller, more agile company comes less revenue and cash, and that means lower thresholds for expenses or accounting errors that investors could consider material to the financial statements.

For example, the bar to capitalize expenses may have been much higher for the conglomerate than the smaller remaining businesses, Yachnik said.

Costs that were shared at the corporate level also might be proportionally larger for the freshly created companies, he said.

In addition to choosing an executive team and directors to lead the new companies, accounting teams and accounting systems will be needed. That will include setting up a new chart of accounts plus standing up payroll and accounts payable processes, Sweeney said.

It’s not like flipping a switch, as “people don’t think about that internal aspect,” Sweeney said.

Eventually, the loss of $15 billion in revenue from J&J’s consumer health line, maker of brands such as Neutrogena and Band-Aid, will touch all four parts of the health-care company’s financial statements—reshaping its profits, cash flows, balance sheet, and shareholder equity.

Those changes won’t be reflected until the spinoff is complete, leaving behind a company focused on medical devices and pharmaceuticals. Once a corporate breakup is complete, the surviving parent presents to investors its streamlined financial picture, with the assets and revenue of the newly formed company, or companies, pulled out as discontinued operations in the financial statements.

In some cases, the spinoff might not be considered a strategic business, so the parent would describe the impact in a footnote, said Ron Graziano, accounting and tax research analyst for Credit Suisse LLC.

“Every one of these things are different,” Graziano said. “They all have their own twists, and there are so many technicalities on how do you set these up for tax reasons, for capital structure reasons. They’re highly complicated.”