The FASB may consider setting guidance for supply chain financing.

Now, the increasingly common but complex payment technique known as supply chain financing may get attention from U.S. accounting rulemakers. The Financial Accounting Standards Board on Wednesday plans to weigh whether to write rules for the financing arrangements, which let companies stretch out payments to their suppliers.

What exactly the board should do is the question. Investors and ratings agencies want details about the deals, but businesses may be reluctant for competitive reasons to reveal all terms of these transactions. In some cases, because a third party arranges many logistics, they may not even know all the terms or the money at stake.

“We all believe disclosure and transparency is extremely important, but we also agree that it’s a challenging item to grapple with,” said Stacey Facter, senior vice president at the Bankers Association for Finance and Trade, an industry trade group.

Supply chain financing involves companies negotiating more time to pay suppliers by having a third party, like a bank, pay the supplier first. Normal payment terms with suppliers might be 60 to 90 days, but these special three-party arrangements can help companies stretch out their payback periods to 180 or 210 days, or even as long as a year.

Banks, companies, and suppliers give high marks to well-run programs. The suppliers get paid, the banks get fees, and the companies have more time to pay their bills. Companies get a bonus: Extended payment terms mean better looking cash flows.

“Where it begins to raise eyebrows, is where companies that have been engaged in this are reporting a large improvement in cash flows that may not be sustainable,” Turner said. “And they aren’t highlighting to their investors why.”

A worst-case scenario emerged in 2018, when U.K. construction company Carillion Plc collapsed. A review of its finances showed that the troubled company used a form of financing called reverse factoring that allowed it to label almost half a billion pounds of debt as “other payables.” 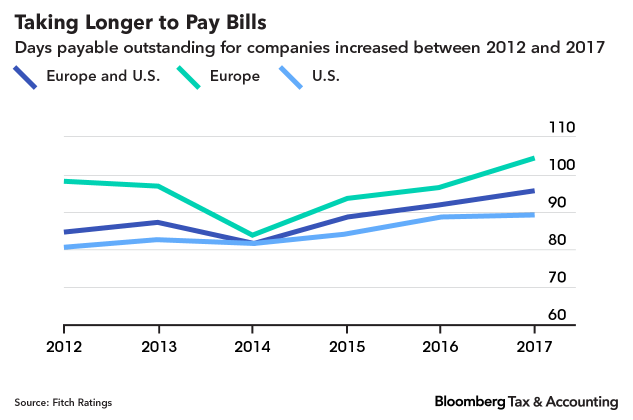 There are no accounting requirements for companies to disclose the transactions or report them on their cash flow statements. Some companies, like the Kellogg Co., voluntarily give details, but most don’t. Investors and analysts fish for clues like chatter on earnings calls or seeing “days payable outstanding” increase from period to period.

That’s the most basic frustration investors have. In many cases, they don’t know these extended payment programs exist, never mind how much money is tied up in them.

The Securities and Exchange Commission has ramped up its scrutiny of companies that in regulatory filings appear to have extended the time they take to pay their suppliers. The SEC in the past year has shot off letters to Keurig-Dr. Pepper Inc., Boeing, Coca Cola, Procter & Gamble, and Graphic Packaging Holding Co. asking them to explain whether they use supply chain financing and to share the basic terms of the arrangements. SEC officials also have signaled in speeches that companies need to step up their game and give more details.

“It seems to me central to strategy and impacting cash flows,” Shaub said. “I’d rather pull it out to be audited.”

But standardized disclosure—whatever form it takes and from whatever authoritative body—could be tricky to draw up from a logistics standpoint, groups that provide supply chain financing say.

In some cases, companies work with banks to negotiate extended payments, but then a separate party deals with the details. The bank could make arrangements with 10 or 15 suppliers but create one total bill for the company. The company likely doesn’t know the terms of each contract, said Facter, of the trade association.

“The bottom line is that they don’t know the numbers,” she said.

And there are more accounting challenges beyond disclosing whether these arrangements exist. Deloitte & Touche LLP, Ernst & Young LLP, PwC LLP, and KPMG LLP sent a rare joint letter to FASB last October, asking it to weigh in on whether companies should classify the financing arrangements as trade payables or as debt because there’s no accounting guidance on the issue, the firms wrote.

Companies, in the meantime, can be in a tough spot if they use these financing tools, said Bruce Pounder, founder of GAAP Lab, an accounting consulting firm. The lack of accounting guidance, the different demands from analysts and investors, and the prospect of being second-guessed by auditors and regulators is a “triple whammy” for businesses, he said.

FASB Chairman Rich Jones said Monday that he was open to hearing what the board’s staff research reveals. When four firms send a joint request to FASB, the board takes a careful look, he said.

But it could be challenging, he said, to write specific rules about what’s a customer-created financing program as distinct from a program in which a supplier sells its accounts receivable—money its customers owe—for a third party to collect.

In addition, if companies include details in the Management’s Discussion & Analysis section of the financial statement, they may not have to repeat it in the audited part, he said.

“Do we also need to put it in the financial statement?” Jones said. “That’s a fair question.”