President signed the largest stimulus package in U.S. history on Friday, a $2 trillion bill intended to rescue the coronavirus-battered economy.

“This will deliver urgently needed relief,” Trump told reporters at the White House, as he was joined by GOP leaders but no Democrats. “We’re going to keep our small businesses strong and our big businesses strong.” 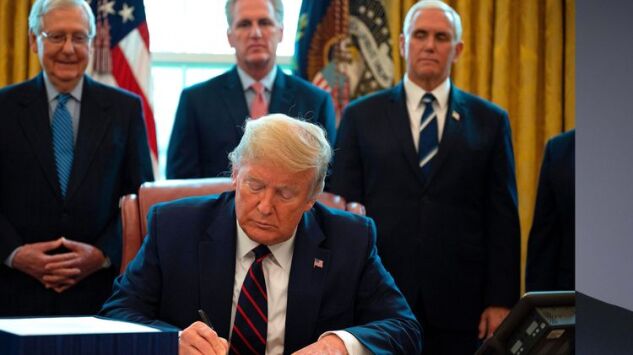 The hard-won plan willprovide a massive injection of loans, tax breaks and direct payments to large corporations, small businesses and individuals whose revenue and income have plummeted under “social distancing” restrictions meant to slow the virus’ spread.

The U.S. has become the worldwide epicenter of the epidemic, with more than 97,000 people infected, surpassing China.

Stocks finished Friday in the red following a three-day rally. Traders cut positions ahead of the weekend despite passage of the stimulus bill. The S&P 500 fell 3.4% while the Dow dropped 4.1%.

Trump urged Congress to quickly finalize the package, saying earlier that it would “deliver much-needed financial assistance to hardworking families and small businesses.”

The prospect of a long-term blow to the economy has prompted Trump to consider easing federal guidelines, despite warnings from governors, public health experts and some members of his own administration they should stay in place for longer.

Trump has repeatedly spoken of “re-opening” the country by Easter and on Thursday he told governors he would rank different areas of the country in order to allow states to eventually relax quarantine and social distancing measures.

The roughly $500 billion in loans and other assistance for major companies, including $62 billion for the airline sector, as well as cities and states struggling with virus-related financial burdens.

It includes $350 billion in aid for small businesses and offers $1,200 direct payments to middle- and low-income American adults, plus $500 for each child. Hospitals would receive $117 billion in assistance, as many become overwhelmed with virus patients. Unemployment insurance would also grow to $600 per week, on top of existing state benefits.

The size of the package far surpasses the $800 billion measure signed by former President following the 2008 financial crisis. Combined with Federal Reserve measures, it would provide around $6 trillion in stimulus to the economy, according to chief White House economic adviser .

But the plan might not be enough to stave off an economic recession or another spike in unemployment. Even before it passed, leaders in Congress said another round of stimulus would almost surely be needed.

“This is not going to be the last bill,” House Speaker said Wednesday on PBS.

The package came together over several days of marathon talks between Treasury Secretary , Senate Majority Leader and Senate Minority Leader . The Senate passed the bill on Wednesday with an overwhelming 96-0 vote.

The House passed it by voice vote on Friday.

“This is a proud moment for our country,” McConnell said at the White House, where he joined Trump.

Democrats had demanded transparency measures on the $500 billion corporate assistance fund and they ultimately won language requiring the Treasury Department and Federal Reserve to publish who receives loans every seven days.

The bill was held up for days until the language was added, sparking a round of partisan squabbling in Washington. Leaders also included conditions to the aid, including the ability of the Treasury Department to take equity stakes in companies that require cash assistance.

The House planned to swiftly pass the stimulus package on Friday but the plan hit a speed bump when Representative , a libertarian Republican from Kentucky, suggested he would until lawmakers returned to Washington to cast their votes in person.

Trump and lawmakers in both parties chided Massie for forcing hundreds of members to leave their home states for a maneuver that would ultimately fail to stop passage of the bill.

“Heading to Washington to vote on pandemic legislation,” New York Republican Peter King wrote on Twitter. “Because of one member of Congress refusing to allow emergency action entire Congress must be called back to vote in House. Risk of infection and risk of legislation being delayed. Disgraceful. Irresponsible.”

Trump blasted also Massie, using Twitter to call him a “third rate Grandstander” and saying he should be thrown out of the Republican Party.