The judge's podium in a courtroom in downtown Los Angeles.
ROBYN BECK/AFP via Getty Images

Attorneys can sabotage themselves during an appeal way before they even approach the lectern. Sidley Austin’s Collin Wedel lists six pitfalls sure to lower an attorney’s chance of prevailing.

Legal appeals are difficult. Odds of prevailing range between 8 percent and 25 percent for appellants. For appellees, a three-in-four chance is not exactly comforting.

To overcome those odds, enterprising attorneys should avoid six subtle pitfalls that can sabotage an appeal long before approaching the lectern.

One: Mangle the Introduction

A good introduction summarizes your themes, the main points, and the reasons you should win, often in a single page.

Unlike in trial court (where introductions can double as a summary of argument), introductions on appeal have to crystalize the key concepts that will make or break the brief before the reader embarks upon the next 12,000-13,000 words.

Blowing this one is easy. At one end are the introductions so abstract and flowery that they leave the reader unsure of what the case is about; at the other end are the ones so minutiae-bound and footnote-littered that they would make David Foster Wallace blush. Either way, mangle (or omit) your introduction and your appeal will stumble out of the gate.

Two: Misstate the Standard of Review

The standard of review is the lens through which the court views what happened below. Some issues require showing “clear error” or an “abuse of discretion,” some are reviewed de novo, and some are mixed. 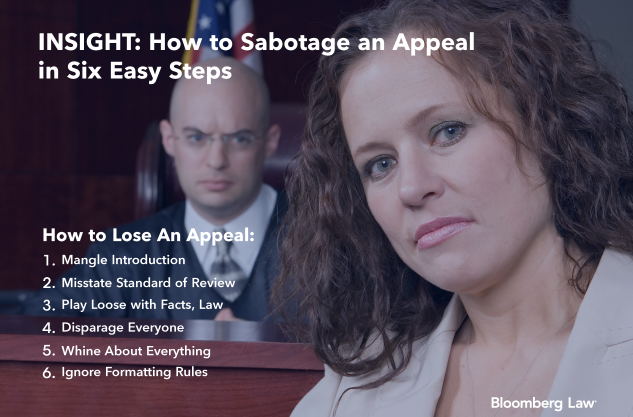 The standard of review significantly affects how you present your appeal: for instance, in California, a substantial evidence challenge after a jury verdict requires that the record be viewed in a manner favorable to the prevailing party, and the appellant waives the challenge if its brief fails to fairly summarize the facts supporting the verdict.

Bad briefs ignore the standard of review, either by setting the bar too low and then failing to meet the right one (e.g., arguing that a decision was wrong without explaining why it was an abuse of discretion), or by fighting over factual findings (which are reviewed deferentially) rather than focusing on a legal issue (which is reviewed de novo).

And, because this appears at the start of the brief, your credibility will be blown before the court ever reaches the substance of your argument.

Judges must follow precedent and apply it to the record as it is, not as the parties wish to be.

Furthermore, lawyers have a duty of candor in every jurisdiction, and usually must disclose adverse authority. E.g., Cal. R. Prof. Cond. 3.3.

Few things aggravate an appellate court more than making assertions that lack concrete support in the record, or citing non-controlling authority (e.g., unpublished cases, district court opinions, or decisions from other jurisdictions) for a proposition on which precedential cases exist.

Bad evidentiary rulings? A lazy judge.
Adverse jury verdict? Float your concerns that your opponent should not have been admitted to the bar.

Use words like laughable, sanctionable, frivolous, and insane, in bold, underlined italics for added effect. Appellate judges despise this sort of sniping and invective—particularly given that they are often friends with (and work in the same building as) the judicial targets of your rhetorical broadsides.

Such venom will taint even your credible arguments and put your appeal on a fast track to the trash bin.

Five: Whine About Everything

If you’re arguing that a referee’s blown call was the reason your team lost the big game, it doesn’t help to complain about the wind, the lights, the crowd, or a cursed goat. After all of that, who remembers the referee?

The same logic has sunk innumerable briefs. As the late Third Circuit Judge Ruggero Aldisert put it, “A party’s choice to raise over a dozen issues . . . requires the composition of an opinion on a hodgepodge of helter skelter contentions. . . . [which], like the currency, depreciate through overissue.’” United States v. Bonner, 469 F. App’x 119, 122 (3d Cir. 2012).

Complaining about every conceivable grievance will stymie the court’s ability to focus on what matters. Even if the judges are sympathetic, they won’t know how to rule for you, so they won’t.

Appellate judges expect lawyers to know how a brief should look. Some courts require Courier font. Most California appellate courts, though, permit fonts “essentially equivalent to Courier, Times New Roman, or Arial.” Cal. R. Ct. 2.105. California’s Second District (the state’s biggest), however, prohibits Times. The Ninth Circuit is agnostic. The Seventh Circuit has a manifesto discussing fonts like Times (bad) and Garamond (worse), versus Bookman (good), Century (better), and Caslon (expensive). The Supreme Court requires Century (most of the time).

And rules on margins, font sizes, and word limits vary. The point is that every court has local rules. Ignoring them is guaranteed to get your non-compliant brief noticed—and not in a good way.

The views expressed in this article are exclusively those of the author and do not necessarily reflect those of Sidley Austin LLP and its partners. This article has been prepared for informational purposes only and does not constitute legal advice. This information is not intended to create, and receipt of it does not constitute, a lawyer-client relationship. Readers should not act upon this without seeking advice from professional advisers.