Several of the major companies doing business with the Pentagon, including ., ., , and . have resumed political donations to Republican lawmakers who objected to President Joe Biden’s 2020 electoral win.

After a pause of several months, defense contractors’ decisions to restart giving coincides with Congress beginning work last month on the annual Pentagon policy and spending measures, which are considered must-pass legislation.

The defense firms were among dozens of U.S. corporations that pledged to halt their political giving in the aftermath of the Jan. 6 insurrection at the Capitol by supporters of then-President Donald Trump. The same day, 147 Republicans voted against certifying Biden’s win over Trump. 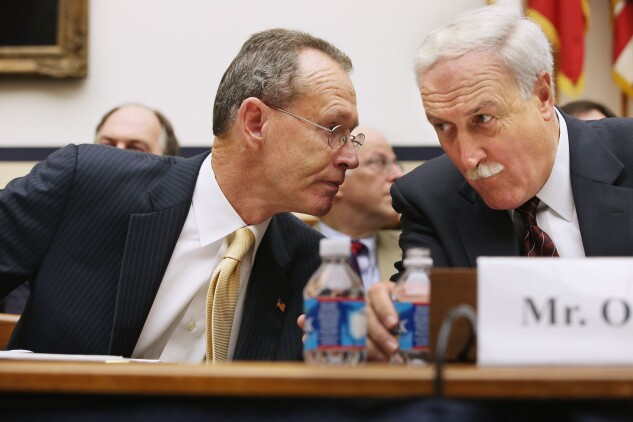 Several months after the insurrection, “there’s less attention, less incentive for them to take a stand for election integrity,” said Sheila Krumholz, executive director of the nonpartisan watchdog OpenSecrets. They want to get back to business, she said.

“These corporations want a stable business environment—and insurrections aren’t good for business—but they are more focused on their bottom line and the shareholders.”

The donations from the defense companies follow a familiar pattern: they are made to some of the top members of congressional defense committees.

Rep. of California, the top Republican on the House Appropriations Defense subcommittee and who voted against certification, received donations from No. 1 contractor Lockheed Martin Corp. and maker of the F-35 fighter aircraft ($1000). Contractors BAE Systems Inc. ($5000), shipbuilder Huntington Ingalls Inc ($1000), Leidos Inc. ($5000), and Northrop Grumman Corp. ($2500) also donated to him.

“Following the customary ‘start of a new cycle’ evaluation of our political engagement program, our PAC program will continue to observe long-standing principles of non-partisan political engagement in support of our business interests,” Trent Perrotto, Lockheed’s director of global media relations, said in a statement. 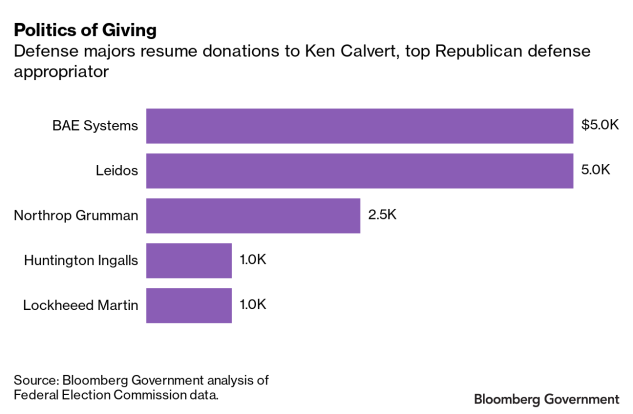 Meanwhile, Leidos, an IT and services company, has adopted a “values criterion” of “integrity and character” as part of its political giving, spokeswoman Melissa Duenas said.

“With this new criterion in place, the Leidos PAC resumed political donations in Q2 FY2021. Information on donations is available in the appropriate public sources,” she said in an emailed statement. Leidos was the first of the defense contractors to resume donations, on April 16.

Rep. of Indiana is also on the Leidos giving list, with a $1,000 donation. Banks, who ran the defense task force in the House Armed Services Committee and is the ranking member of the Cyber, Innovative Technologies and Information Systems subcommittee, also received donations from . and Lockheed.

“I am not at all surprised that this has happened just because there is a lot of pressure to give,” said Steve Ellis, president of Taxpayers for Common Sense, a Washington-based watchdog organization. “These are still members of Congress, and they still have power—and it is quite frankly quite a lot of them that they would be cutting off, and some that are in very powerful positions.”

Among sitting lawmakers who received $5,000 from Boeing—the maximum amount a PAC can give per election—were House Minority Leader Kevin McCarthy of California, Minority Whip Steve Scalise of Louisiana, and Rep. of Missouri, all three of whom voted against Biden’s win. Hartzler, who announced a campaign for the Senate last week, is the top Republican on the House Armed Services Subcommittee on Tactical Air and Land Forces, which oversees several of Boeing’s aircraft contracts including the Chinook helicopter and the F-15 E/X fighter aircraft built in Missouri.

“We will continue to carefully evaluate our giving to ensure that we support candidates who support our business and policy priorities,” said Boeing spokeswoman Chris Singley. She said the company also takes into account the interests of its customers, its diverse workforce, and the communities in which it operates when considering its political contributions.

Northrop Grumman and Huntington Ingalls, which has large shipbuilding operations in Newport News and Norfolk, Va., donated to Rep. , the ranking member of the House Armed Services Subcommittee on Seapower and Projection Forces. The panel oversees both Northrop’s B-21 bomber program and the Navy’s shipbuilding programs.

Northrop didn’t return a request for comment by press time.

The Huntington Ingalls PAC “paused contributions early in the year to review their budget and potential governance changes,” spokeswoman Beci Brenton said in an email. It has now “resumed donations with a focus on members who support a strong national security posture,” she said.

To contact the editors responsible for this story: at ayukhananov@bloombergindustry.com; at ktrygstad@bgov.com