California companies are scrambling to bring on diverse board members ahead of a new state law’s end-of-year deadline, but recruiting women of color has proven a challenge for many.

About 28% of the board directors at Russell 3000 Index companies in California are women, but only 1% of those women-held seats are by Latinas, according to data from Equilar, a corporate board data firm.

“We’re invisible in the boardroom,” said Esther Aguilera, president and CEO of the Latino Corporate Directors Association. The group’s members include approximately 300 Latinos from the public and private sectors.

Other groups are also struggling to make gains as the California deadlines approach. Black and Middle Eastern women make up 2% and 0.2% of board seats respectively, while Asian/Pacific Islander women have the most representation at 3.1%, Equilar found. Nearly 20% of female directors didn’t identify their race or ethnicity, Equilar said.

The low numbers aren’t for lack of qualified candidates, but rather limited social and professional circles, said female board members, executive headhunters, attorneys, and academics.

Minority professional organizations like Aguilera’s are trying to shatter perceptions that there’s a lack of “board-ready” candidates of color to take on the fiduciary duties and other responsibilities that come with the role.

Latinos bring “a particular insight that is fundamental to business growth” but that remains missing in most boardrooms, Aguilera said.

“There’s a perception that we are essential workers but not your corporate leaders,” she said.

Boards are increasingly tapping professional minority organizations to be more proactive in their searches for qualified women and people of color to serve as directors, said Betsy Berkhemer-Credaire, CEO of 50/50 Women on Boards and head of an executive search firm. She was one of the leading advocates for California’s gender board diversity law.

Companies scrambled to meet California’s first gender diversity deadline in 2019 by reaching out to their bankers, accountants, and attorneys asking for recommendations, said Berkhemer-Credaire. Now they’re including groups like Aguilera’s as well as professional search firms in their outreach.

“There are thousands of qualified women throughout the country for corporate boards,” Berkhemer-Credaire said. The challenge is to help candidates with limited circles of contacts expand their networks, “but it’s happening,” she added.

Corporate boards are charged with not just fiduciary duty toward shareholders, but are also expected to serve on audit, finance, oversight, governance, and nominating committees. They also work with management to help guide company strategy and respond to the needs of shareholders, employees and customers, among other responsibilities.

A host of studies in recent years have found that board diversity—even broadly defined to include different socioeconomic backgrounds in addition to gender, racial, or ethnic diversity—leads to improved financial outcomes for companies.

Shareholder pressure and the broader social justice protests of the past year have put corporate America on notice about diversity.

BlackRock Inc., the world’s largest asset manager, and Vanguard Group Inc. said they will vote against directors this year who fail to act on diversifying their boards and workforces. Proxy advisory firm Institutional Shareholder Services said it will recommend voting against directors of all Russell 3000 or S&P 1500 companies whose boards aren’t diverse enough, beginning next year.

There’s broad agreement among companies for more racial and ethnic diversity on boards, said Paul Washington, executive director of the Environmental, Social and Governance Center at The Conference Board, a nonprofit research organization whose member companies include most of the Fortune 500.

But companies are also trying to aim for diversity of thought, Washington said. That involves a more intensive search and vetting process than what’s been done in the past, he said.

The goal isn’t just to check a box, he said. “It’s building the quest for diversity on every search you’re doing for your board,” Washington said. 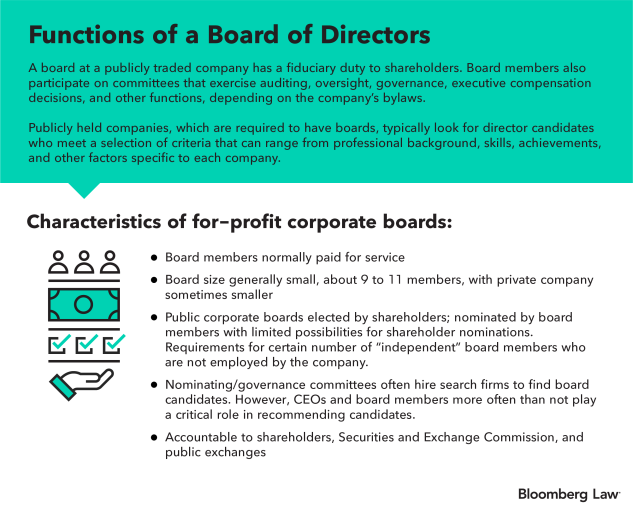 Most companies have embraced the idea of addressing gender diversity on their boards quickly and directly, said Patrick Gadson, a partner at Vinson & Elkins LLP who co-leads the firm’s shareholder activism practice.

But the same doesn’t necessarily hold true for tackling ethnic or racial diversity, Gadson said. “If there’s gender diversity in the boardroom, the idea of racial or ethnic or other diversity isn’t really something that’s always talked about,” he said.

Conversations about racial and ethnic diversity have historically been more uncomfortable for predominantly older, white, and male board members to have, said Gadson.

That dynamic will increasingly change as younger generations with more diverse personal and professional networks join boards, he said.

“We are coming to a point in which it’ll be very tough” for companies to say it’s hard to find qualified minority board candidates, Gadson said.

Board members of color say they’ve seen concrete benefits to shareholders and companies from having more diverse perspectives on board.

Some boards have been years or decades ahead of the diversity curve, said Maria Sastre, a former United Airlines Holdings Inc. executive who sits on the boards of General Mills Inc. and O’Reilly Automotive Inc., and previously served on the boards of Darden Restaurants Inc., Publix supermarkets and Laidlaw International, which owned Greyhound buses at the time of her service.

Each of those companies has a strong Latino employee and customer base, and recognized the benefit of having a Latina on their board who also held significant executive experience, Sastre said.

Sastre visited Greyhound terminals while on Laidlaw’s board and helped improve signs, transportation safety procedures, and ticket purchasing facilities to serve the company’s growing Spanish-speaking customer base. While the company knew its customers, it needed help recognizing steps to support them, Sastre said.

“There was just an enlightenment that really came from having a perspective that better understands” the Latino market, she said.

Women of color with board ambitions should focus on professional roles linked to a company’s revenue generation, said Bonita Stewart, vice president of global partnerships at Google.

But women of color often don’t receive the same opportunities for “stretch assignments” to expand their skills and gain experience, according to a 2020 survey by the Executive Leadership Council that Stewart co-authored.

“The notion of professional development is a big aspect of moving more women of color onto boards,” Stewart said. It took Stewart more than nine years to join her first corporate board after attending her first training program in 2005, she said.

Stewart currently serves on the board of PagerDuty Inc., a San Francisco software company that helped launch the Board Challenge. Companies pledge to recruit at least one Black board director within a year of joining the effort.

PagerDuty’s eight-person board, which includes four women and multiple minorities, helps the software provider stand out among its industry peers, Stewart said.

“Having that perspective in the boardroom and the potential return to the shareholders is, I think, what everyone should be reviewing,” she said.

A lawsuit contesting the gender diversity requirements as unconstitutional was allowed to move forward last month as the U.S. Court of Appeals for the Ninth Circuit reversed a district court ruling blocking the case.

Another suit filed by longtime affirmative-action opponent Edward Blum is challenging both the gender requirements and the law requiring boards to have at least one member from “underrepresented communities.”

Even if the laws could ultimately be struck down, corporate boards won’t be able to ignore the shareholder and consumer pressure for more diversity in their ranks, said Berkhemer-Credaire.

“What company wants to have a board that looks to be out of touch with business issues today?” she said.

To contact the editor responsible for this story: at ghenderson@bloombergindustry.com, at mferullo@bloomberglaw.com