asked a California federal judge to send a class action alleging violations related to the recent mass layoffs at the social media company into individual arbitration.

The laid-off workers who sued Twitter previously agreed to arbitrate any dispute arising out of their employment as part of their job offer packet, the company said in a brief filed late Monday.

The workers further showed their assent to the arbitration agreement by failing to submit a request to opt out of the deal for 30 days after they began their employment, Twitter said.

Litigation over the mass layoff comes amid chaos at Twitter after Elon Musk purchased the social media company for $44 billion, fired half its workforce, asked some essential employees to return, rolled back its expansive work-from-home policy, and called on workers to sign a pledge to remain at an “extremely hardcore” Twitter or quit.

Musk’s stewardship of Twitter has triggered class actions arguing the company failed to give proper notice before laying off thousands of employees and contractors, as well as class claims that his demand that workers return to the office and log “long hours at high intensity” discriminates against disabled workers.

Musk’s invoked employee arbitration agreements to escape a class action related to mass layoffs at the electric car maker. Those workers have challenged an order dismissing the case pending arbitration.

Prominent plaintiffs lawyer Shannon Liss-Riordan of Lichten & Liss-Riordan PC, who represents the laid-off workers who sued Tesla and Twitter, said Twitter has basically argued it doesn’t have to worry about the law because the workers are bound by an arbitration agreement.

“If former Twitter employees need to bring individual arbitrations in order to enforce their rights, we are ready to represent them—and will bring hundreds or thousands of arbitrations if necessary to ensure that Elon Musk, the richest man in the world, is held accountable under the law,” she said. “No one is above the law.” 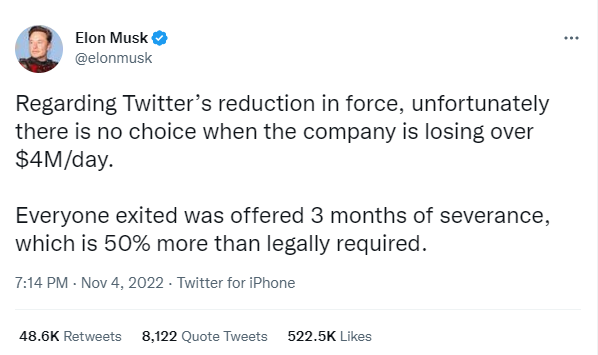 Twitter workers sued the company in federal court in San Francisco on Nov. 3—the eve of mass layoffs—alleging violations of the Worker Adjustment and Retraining Notification Act and California’s version of that law for not providing the mandatory notice before sacking workers.

A day later, Liss-Riordan said she was “pleased” to learn that some terminated workers will continue being paid until Jan. 4, which showed that Musk “is making an effort to comply” with the legal requirement to provide 60 days of notice before a mass layoff.

But she updated the lawsuit on behalf of ex-Twitter workers on Nov. 8, adding breach-of-contract claims for breaking promises to continue its remote-work policy for at least a year and to provide severance at least as favorable as packages it provided before Musk bought the firm.

Several of the workers suing Twitter were offered a month’s salary and were told they wouldn’t receive the pay unless they signed a release of legal claims against the company, according to the amended complaint.

The workers are seeking a court order preventing the company from requiring laid-off workers to sign agreements that they wouldn’t join a class action against it in order to get their severance packages.

A protective order blocking the company from soliciting such releases—and nullifying any that it’s already obtained—is necessary to protect the legal rights of thousands of potential class members, they said.

Liss-Riordan obtained a protective order on behalf of workers who were let go from Tesla.

US District Judge James Donato set a Dec. 8 hearing on the former Twitter workers’ request for a protective order. Donato, an Obama appointee, said in a Nov. 18 order that he adopted the schedule for considering the motion “with the understanding that Twitter will not seek employee releases pending further order.”

The workers’ Nov. 9 request is based on a well-developed body of federal law analogous to the state law standards developed after a California appellate court’s 2009 ruling in Chindarah v. Pick Up Stix, Inc., said Lauren Teukolsky, a plaintiffs’ attorney with Teukolsky Law PC.

“Many cases since Pick Up Stix have found releases to be invalid where the employer engaged in coercive or misleading tactics,” Teukolsky said.

Twitter’s efforts to obtain releases are coercive because the company is pressuring workers to quickly accept severance agreements and misleading for not telling workers about ongoing litigation, according to the workers’ request for a protective order.

But the company argued in a separate filing Monday that the court should reject the workers’ request for a protective order because they signed arbitration agreements and thus have no standing to sue.

“Here, the only risk to the rights of absent class members is depriving them of their promised severance benefits and misleading them into thinking they may be able to recover potential damages in this soon-to-be-dismissed lawsuit,” Twitter said.