Some big news this week for corporate attorneys includes a Bloomberg reportthat shows Snapchat gearing up for an IPO, choosing bankers from Morgan Stanley and Goldman Sachs Inc. to lead the offering.

That’s according to a report from Sarah Frier and Alex Barinka, which has since been picked up in various outlets. With no prospectus filed at this point (and no IPO confirmed), the news had us wondering which law firms would advise on such a monster transaction?

There’s good reason why Evan Spiegel, Snapchat’s 26-year-old CEO and co-founder, should have no problem finding one (outside of the fact that any lawyer would jump at the job as the company is valued at $25 billion). Spiegel’s father is John W. Spiegel, a Los Angeles partner at Munger Tolles & Olson who represented Transocean Ltd., the company that owned the Deepwater Horizon rig in the 2010 BP oil spill off the Gulf of Mexico that resulted in a wave of litigation. He also defended Warner Bros after the company was sued for $100 million by actor Charlie Sheen for being fired from the comedy show Two and a Half Men.

Back to Spiegel: His firm Munger Tolles, just got a new Washington, D.C. office with the addition of former U.S. Solicitor General Donald Verrilli. Prior to the Verrilli announcement, the California law firm, had just two offices — one in Los Angeles and another in San Francisco — for 25 years. For the year 2015, its partners earned profits (on average) of $1.87 million, according to The American Lawyer.

Munger Tolles has served as legal counsel to Snapchat this year, according to Bloomberg Law’s litigation analytics, although Spiegel wasn’t on the docket.

One case filed this July in Los Angeles Superior Court was brought by two Illinois residents, who claimed they didn’t consent to Snapchat’s collection of personal facial recognition data. That case moved to arbitration and was last seen on the dockets in August 2016. The Munger lawyers on the case: Ankur Mandhania, Jonathan H. Blavin and Rosemarie T. Ring.

According to a person familiar with the matter, Munger had landed the case after a “competitive RFP” based on its subject matter expertise. Snapchat’s other outside legal advisors include Cooley, Hogan Lovells and Quinn Emanuel Urquhart & Sullivan, according to a search of Bloomberg Law. Cooley, for instance, represented Snapchat in a July lawsuit filed by celebrity attorney Mark Geragos that accused the company of not doing enough to warn teenagers and parents about sexual content on its app.

We reached out to both of the Spiegels — haven’t heard back from Evan, but his father declined to comment, saying he doesn’t speak about their relationship to the press. 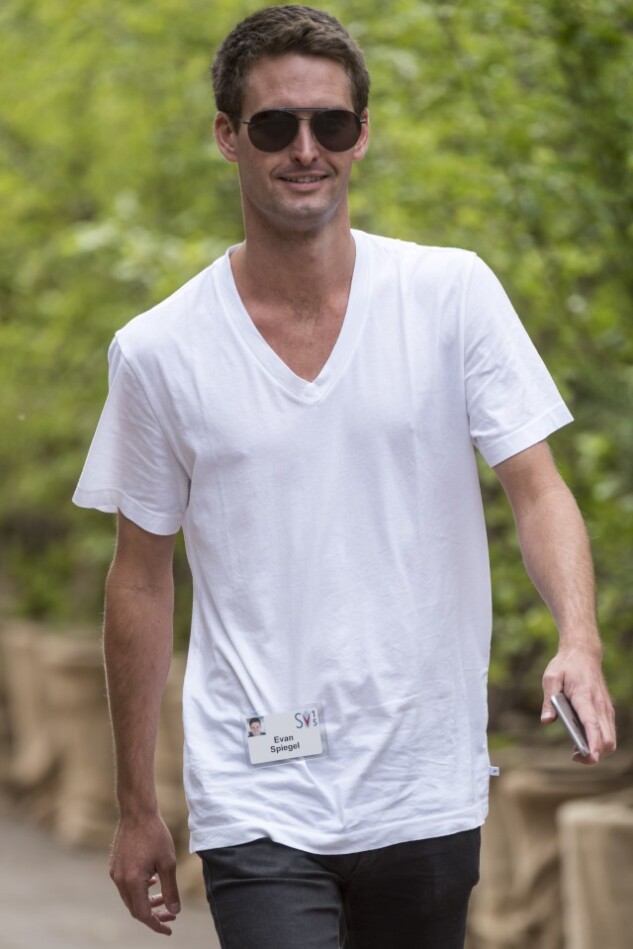 Evan Spiegel, co-founder and chief executive officer of Snapchat Inc. Photographer: David Paul Morris/BloombergThere might be a reason for that: In an L.A. Weekly profile of Evan Spiegel from 2013, the publication called out the entrepreneur’s parents and their pedigreed legal credentials before detailing their divorce from court records.

L.A. Weekly wrote that by the time Spiegel was born, his father was well established, having developed a specialty in securities law and representing Southern California Edison when it went bankrupt during the California energy crisis. The magazine also cited big pay figures that illustrated a privileged upbringing: John W. Spiegel earned more than $3 million in 2006 and his family owned a $2 million house in Pacific Palisades, it was reported. His mother, Melissa, is a Harvard Law graduate who worked as a tax attorney, though stopped when her children were born, the publication said.

They had five luxury cars, including three Lexuses and a restored 1966 Mustang, and memberships in the Riviera Club, the California Club, the Jonathan Club and the La Jolla Beach & Tennis Club. They took regular trips to Europe, the Bahamas and Maui, staying in Four Seasons resorts. Young Evan enjoyed Jet Skiing and wakeboarding. On one occasion, he and his father went snowboarding by helicopter in Canada, court records show.

In 2007, John and Melissa filed for a divorce — a proceeding in which legal bills ran upward of $1.5 million.

In the meantime, no answer as to which lawyers are guiding the company in its IPO, which could happen as soon as March, people familiar with the matter told Bloomberg.

We’ll keep our eyes and ears to the ground, but let us know if you hear anything