Welcome back to the Big Law Business column on the changing legal marketplace written by me, Roy Strom. Today, we look at a bond forged by a Skadden associate and an inmate she helped become the first Illinois defendant to earn resentencing under a new law. Sign up to receive this column in your inbox on Thursday mornings.

Corzell Cole fought for freedom from prison for years without success until he met Shelisa Thomas, who struggled with homelessness before becoming an attorney and taking his case, which “screamed injustice” to her.

As a result Cole became the first Illinois inmate to successfully use a new state law that lets prosecutors ask judges to reconsider cases when “the original sentence no longer advances the interests of justice.”

Cole left prison in March after serving nearly 20 years. He says he couldn’t have done it without Thomas, whose own life struggles convinced him she would understand his plight.

“Sharing her story created an immeasurable amount of trust and gave me confidence that it was safe to share all of who I was and how I came to be the man that I am today,” Cole wrote in a letter obtained by Bloomberg Law. “Because of her, I did not need to feel ashamed of my background.”

Cole, then 19, was arrested after a man in his car shot into a vehicle at a stop light, killing one and injuring another. The gunman fled. Cole said he didn’t know the passenger had a weapon.

He was charged on an accountability theory, meaning he was held responsible for the actions taken by his passenger.

The gunman, who argued he acted in self-defense, was convicted years later of second-degree murder and attempted murder, receiving a sentence that made him eligible for parole before Cole.

In an application to Northwestern University at age 18, she described herself as a homeless, single mother who waitressed 80 hours a week. She dropped out of high school in ninth grade due to pregnancy complications and got her GED years later after finding financial stability through a job managing an auto repair shop.

She ended up receiving her undergraduate degrees at Purdue University in 2016 with a 3.8 grade point average. She then went to law school at Northwestern and endured family tragedies, including the deaths of the father of her three children, her mother and her aunt. At one point, she had nine family members living in her home.

Thomas and Cole met in a Northwestern prison education program. Shortly after she became an associate with Skadden, Arps, Slate, Meagher & Flom, he asked her to review a clemency petition that another lawyer had prepared for him.

Thomas in 2020 agreed to take the case and convinced Steven Drizin, co-director of Northwestern’s Center on Wrongful Convictions, to work with her.

“The facts of his situation from the very beginning just screamed injustice to me,” Thomas said in an interview. 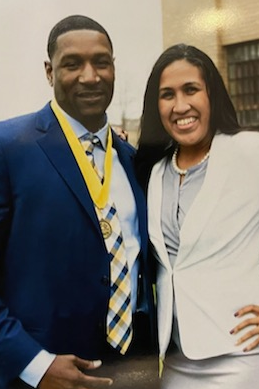 Glasgow called Drizin and said he was interested in using the new Illinois law to ask a judge to reconsider Cole’s sentence.

“He was more than willing to use every tool in his arsenal to right this wrong,” Drizin said.

The resentencing petition asked a judge to vacate Cole’s first-degree murder conviction. Cole would then plead guilty to second-degree murder.

Because he’d served the time for his attempted murder charge and was well into the sentencing range for a second-degree murder conviction, he’d be able to be released if the judge agreed.

At the re-sentencing hearing in March, Thomas testified to Cole’s rehabilitation. She noted he’d earned an associate’s degree and was pursuing his bachelor’s through Northwestern’s prison education program. He’d developed skills as a barber and had lined up a job upon his release.

The judge agreed, and Cole walked free from Stateville Correctional Center in early March, reuniting him with his three children.

Thomas’s work on Cole’s case earned a pro bono award from The Chicago Bar Foundation presented this week, which comes with a grant to a pro bono or legal aid program of her choice.

The award typically goes to longtime partners of prestigious firms, making Thomas the rare associate to earn the prize and likely the quickest to do it since graduating law school.

“It puts her right up on Mount Olympus with some of the most impressive public-service oriented lawyers in recent Chicago history,” Drizin said.

Cole, meanwhile, is working as a barber, speaking about his case, and pursuing his bachelor’s degree in social science.

He hopes to earn a Ph.D.

“I plan to spend the rest of my life trying to repay her for what she has done for me,” Cole wrote of Thomas. “She told me that the way to repay her is to move forward with my education and pursuing my goals, and I’m doing just that.”

Drizin said it is “not that uncommon” that accomplices to crimes receive harsher sentences than those who commit them. Those sentencing disparities mean there are “thousands of opportunities” for prosecutors to use Illinois’ new law, Drizin said.

“Getting them to do that is a challenge,” he said.

So far, Cook County State’s Attorney Kim Foxx has pursued resentencing under the law in a handful of cases, according to local reports, which note the program carries political risk. Her office has said it won’t use the law for homicide offenses.

Thomas, however, is optimistic.

“We’re hopeful that using this law will set precedent for the better,” she said.

On Miami and Big Law: A recruiting war in a limited pool for legal talent is playing out in Miami after the likes of Quinn Emanuel, Kirkland & Ellis, King & Spalding and Sidley Austin have entered the market, Maia Spoto reports.

On Antitrust: The Justice Department has ramped up its hiring of antitrust lawyers, Sam Skolnik reports, bringing aboard two plaintiff lawyers with decades of experience suing companies and hoping to fill vacancies in San Francisco, Washington, New York and Chicago.

On Big Bankruptcies: Kirkland & Ellis won another big bankruptcy case, Brian Baxter reports. The firm is representing a 3M Co. subsidiary that will try and resolve hundreds of thousands of claims brought by U.S. military members who suffered hearing loss from allegedly faulty combat earplugs the company sold to the armed forces.