Kim Kardashian at the 2022 Vanity Fair Oscar Party. The celebrity agreed in a settlement with the SEC that she won't tout any digital assets for three years.
Photographer: Frazer Harrison/Getty Images

will pay $1.26 million to settle allegations that she broke US rules by touting a crypto token without disclosing she was paid for the promotion.

The SEC said Monday Kardashian was paid $250,000 to post on her Instagram account about EMAX tokens, a crypto asset offered by EthereumMax. Kardashian didn’t admit or deny the regulator’s allegations as part of the settlement, in which she agreed not to tout any digital assets for three years.

The reality television star settled the case to avoid a protracted dispute and “so that she can move forward with her many different business pursuits,” said , a partner at the law firm Cooley who is representing Kardashian. She “fully cooperated with the SEC from the very beginning and she remains willing to do whatever she can to assist the SEC in this matter,” he added. 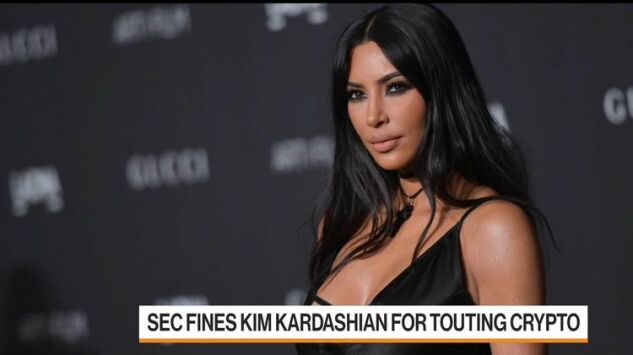 Wall Street’s main regulator has previously warned that celebrities touting cryptocurrencies it deems securities need to make clear to investors if they’re paid for the backing. In 2018, the regulator fined boxer and music producer DJ Khaled for failing to disclose payments they received for hyping initial coin offerings.

Kardashian included “#AD” at the bottom of the post in 2021, according to the SEC. Despite that, the SEC said investors weren’t made aware of her being paid for the ad.

The main difference between Kardashian’s settlement and earlier ones related to digital assets is the size of the penalty, said Coy Garrison, a partner at Steptoe & Johnson. “The higher penalty suggests that the SEC is taking a tougher stance against celebrities and believes that celebrities are on notice of their need to comply with the anti-touting provision of the securities laws with respect to crypto assets,” said Garrison, who used to work at the SEC.

Wall Street’s main regulator has long asserted that many virtual tokens are securities and under its jurisdiction. To determine whether something is a security, the SEC applies a legal test, which comes from a 1946 Supreme Court decision. Under that framework, an asset can be under SEC purview when it involves investors kicking in money with the intention of profiting from the efforts of the organization’s leadership.

The advertisement was also singled out by the UK’s financial regulator last year as part of a crackdown on crypto endorsements by social influencers. Charles Randell, then chair of the Financial Conduct Authority, said Kardashian’s Instagram post “may have been the financial promotion with the single biggest audience reach in history.”

(Updates with Kardashian attorney statement in the third paragraph.)