Trees burn along Highway 89 during the Tamarack Fire in Markleeville, Calif., on July 17.
Photographer: David Odisho/Bloomberg via Getty Images

Choking wildfires have been inundating swaths of the U.S. with smoke pollution this month as blazes tear through the West Coast, a health crisis created by gaps in national air law and forest management challenges, experts say.

Denver, Colo. experienced some of the worst soot-filled air pollution among all major cities in the world as fires continued to rage in California, according to IQAir pollution index readings last weekend. Blazes like the massive Bootleg Fire in Oregon are also sending plumes of traveling smoke to faraway states like Minnesota, which have had to warn residents about the elevated levels of particulate matter carried in the smoke.

But there aren’t many regulatory options to address the public health impacts of the wildfire pollution caused by smoke. Wildfire experts and advocates want better solutions for protection—especially in the face of a rapidly changing climate.

“This problem has developed really fast in regulatory timescale,” Michael Wara, senior research scholar at Stanford Woods Institute for the Environment, told Bloomberg Law. “And so everyone is playing catch up and trying to understand and develop responses.”

There’s no silver bullet for the dense web of problems during wildfire season. But advocates for better fire management say the combination of air law gaps, limited local resources, and how blazes are mishandled are making widespread pollution everyone’s problem.

Despite the predictable worsening of fire seasons, there’s no mechanism for holding anyone accountable for the air quality consequences of out-of-control blazes that rage predominately on public lands.

“If the federal government didn’t have sovereign immunity from suit, it would be a rational thing to sue them as a landowner because they are interfering with the public health and enjoyment of the rest of society,” Wara said. “Just like you would sue a factory that was spewing pollution over a town.” 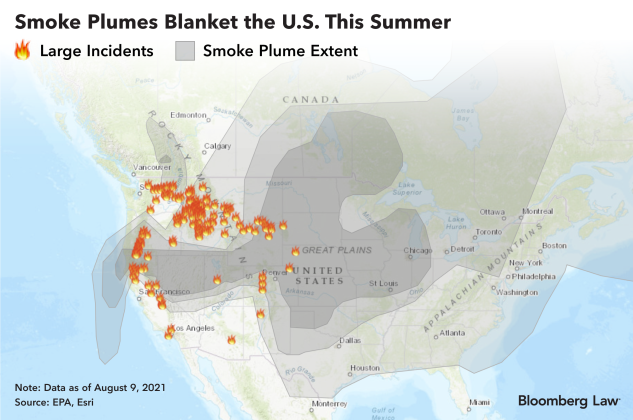 Wildfires that turned the skies a blazing orange for days last year set many cities on the West Coast even further out of compliance with particulate matter standards despite clean air gains in other areas of the country, according to EPA’s latest air quality overview.

“Something has gone wrong with the way that we approach air pollution,” Wara said. “And I think the diagnosis really relates to the way that wildfire was thought about and handled generally, around the 1960s and 70s.”

The Clean Air Act treats wildfires as “exceptional events,” meaning the air pollution created from blazes gets “taken out of the map” when it comes to states meeting air quality standards, said Miles Keogh, executive director of the National Association of Clean Air Agencies.

“The Clean Air Act doesn’t care about sources, it cares about what that means in the ambient environment,” he said. Spikes of pollution from wildfires don’t trigger compliance requirements under National Ambient Air Quality Standards, which measure pollution averages for six kinds of air pollutants over extended periods.

The Clean Air Act has been a boon for air quality in many U.S. cities. However, a worsening climate and more severe disasters may call for a reassessment of things like emission inventories are affected by fires, Wara said.

“It’s not like a total fix, but right now the way that EPA implements the exceptional event, it kind of removes any incentive, from an air regulatory point of view, for states to do better,” he said.

That means one less incentive for better fire mitigation efforts before out-of-control blazes even start.

Widely held perceptions of fire as a blight rather than a necessary component of forest health impedes efforts to curtail accidental blazes, including managed burns that are among the best ways to reduce the fire pollution that keeps areas out of attainment, say fire experts.

Controlled burns that whittle away dense woods fueling massive wildfires will be important as climate change ramps up the intensity of fire seasons, Wara said. Restoring natural fire regimes as part of forest management efforts is the best way to tackle a problem that now spews pollution as far as the Eastern Seaboard, he said.

“That is the way that we are going to reduce—really the only proven way for reducing—the risks and consequences of catastrophic wildfire,” he said.

Under a managed fire, prescribed burners light controlled blazes in smaller areas under moist weather conditions, so the flames generate less heat and fewer emissions than an un-managed blaze. Fires release emissions regardless of the source, but certain blazes pack more punch than others, University of New Mexico associate professor Matthew Hurteau said.

“The question is, really, how do you want your smoke delivered,” he said. “Do you want it in these big, significant events that are impacting the Eastern Seaboard right now, or do we want more smoke put into the atmosphere in a more managed fashion?” 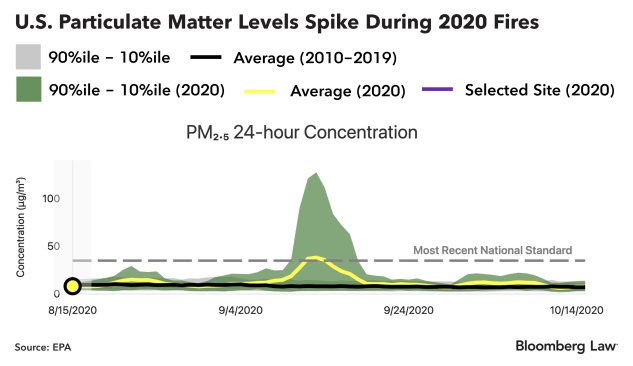 The answer isn’t clear, in part because with “prescribed burning,” unlike with accidental fires, managed blazes can’t be written off in air laws.

That challenge is another disincentive to accomplish fire mitigation work through managed burning, according to Lenya Quinn-Davidson, fire adviser for the University of California Cooperative Extension.

“Those of us who work on this feel like we’re just fighting tooth and nail to use prescribed fire and to get good fire on the landscape and to do this preventative work,” she said. “But everything we do is counted against our air districts’ attainment standards.”

Federal agencies like the Forest Service support prescribed burns, but they lack money, personnel, and resources, Quinn-Davidson said. Air districts also generally support managed burns, but getting a permit in an understaffed district can take months of bureaucratic wrangling, she said.

“We need to give our air districts a lot more money in support, so that they can make it as easy as possible on the burners,” she said.

Aside from burn permits, local air agencies’ role in wildfire work is limited to ascertaining what’s burning, who’s breathing it in, and what those people can do about avoiding it, according to Keogh.

The U.S. Environmental Protection Agency bolsters that work through tools like the AirNow Fire and Smoke Map, which tracks smoke plums and pollution by aggregating data from local monitors.

While air districts work hard to keep monitors running during fires and work with public and private prescribed burners to grant air permits for managed forest clean-up, experts lament the lack of resources and budget increases available for that work.

Part of the dilution comes from the wide delegation of authority under the Clean Air Act, Wara said. Every county in California, for example, has an air quality management district in charge of its own pollution budget and allocation of already limited resources.