The White House is developing a plan—reminiscent of its approach to electric vehicles—to make its own massive stock of buildings more energy-efficient, hoping to set an example for states and cities to follow.

CEQ, the General Services Administration, the Department of Energy, and the Environmental Protection Agency are working out the details of the plan, which comes in the wake of several large cities and states setting efficiency standards for buildings.

The impact could be significant because the government is the nation’s biggest property owner. At last count in 2019, the federal government owned more than 253,000 buildings—encompassing 2.4 billion square feet—and another 440,000 structures, according to the GSA.

Buildings are also notoriously bad emitters, comprising 13% of the nation’s total greenhouse gas emissions in 2019, according to the EPA. 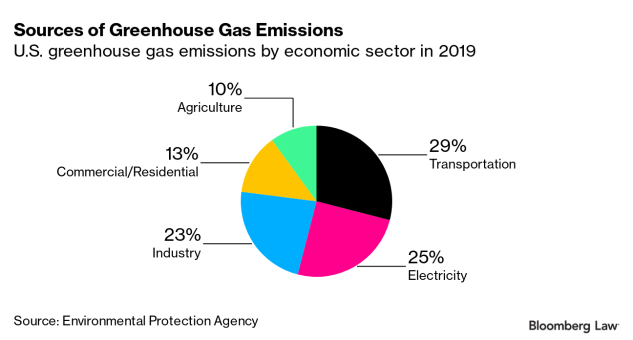 “Being able to make sure we are truly drawing the connection both within the federal government, but also outwards, around extracting more value from buildings, making sure they’re cleaner, more resilient, more affordable—that’s how we start to look at decarbonizing our built environment,” Chambers said.

With both electric vehicles and buildings, the White House is getting the ball rolling by making improvements to the fleet it controls—without the need for regulation—and then hoping states, local governments, and the private sector take notice.

“This is a clarion call to state and local governments as well,” Chambers said. “They have expressed interest in what we’re doing. The fact that we’re engaged in this process seems to be inspiring a lot of other local jurisdictions to also consider and identify ways we can provide resources to do that. Creating a little bit more of a movement around this is an important tool.”

Chambers has direct experience in local government, having served as director of New York Mayor Bill de Blasio’s (D) Office of Sustainability when it finalized a landmark law limiting greenhouse gases from buildings. Washington and Colorado already have standards for commercial buildings, and California, Maryland, New York, and Massachusetts, are working on it.

Cathleen Kelly, the former deputy associate director for climate change adaptation at CEQ under the Obama administration, applauded the approach.

“The pump is already primed here, and if the federal government steps up and really leads, highlights, and showcases high efficiency and performance standards, a lot more companies and governments will follow suit,” said Kelly, now a senior fellow at the Center for American Progress.

The administration’s plan seems like a good way to prove the business case for building efficiency, said Illya Azaroff, an associate professor at the New York City College of Technology who specializes in resilience.

“You tell the business community they can start making money or save money on their building, and they want to see proof,” Azaroff said. “They’re not talking about carbon and 400 parts per million. That doesn’t make sense to the average person. But if you can say it can cut your energy bill 65%, they’re going to say, ‘Wait a minute.’”

A wide range of tax incentives are available to help commercial building owners defray the costs of improving their energy efficiency.

Congress is also hammering out additional incentives for private building owners. The bipartisan infrastructure bill includes $225 million in grants for upgrading building energy codes and a $40 million grant program to train people on how to do energy audits of commercial and residential buildings.

A recent memo from Senate Democrats further instructs the Senate Energy and Natural Resources Committee to allocate $198 billion in the pending budget reconciliation bill for a wide range of activities, including consumer rebates to weatherize and electrify homes.

Free-market groups broadly said they don’t object if the White House wants to fix up its own buildings, although they draw the line at state or local mandates.

“Of course you can push too hard,” said Ben Lieberman, a senior fellow at the Competitive Enterprise Institute. “If efficiency standards raise the costs of some of the equipment, you can reach a point where it’s costing more money than you’re saving. So you don’t want to do efficiency at all costs.”

Most commercial property owners are savvy about calculating how much a given efficiency improvement will save them over time, and how much they could make by investing what they save on energy costs, said Joel Griffith, a research fellow specializing in financial regulation at the Heritage Institute. Thus, if a building improvement will bring in a solid return, building owners don’t have to be compelled to make them, he said.

But commercial building owners constantly have to maintain their buildings anyway, meaning they have lots of opportunities to upgrade to more efficient lighting or re-insulate their windows, roofs, walls, and doors, according to Azaroff.

“It’s amazing how just changing the windows begins you on a path,” Azaroff said. “It may cost tens of thousands of dollars to do that, but then you begin to see the change in the energy profile. And the return on investment is quick.”