Fast-food restaurants and grocery store chains are joining a growing number of states in pushing “forever chemicals” out of food packaging, despite a federal thumbs-up that allows PFAS to touch what people eat.

Burger wrappings, salad bowls, pet food bags, and other packaging use some of the chemicals in the PFAS family to repel oil and grease. Companies also use per- and polyfluoroalkyl substances to protect food-processing equipment from heat and other stressors.

But some PFAS don’t break down in the environment, and their links to health problems ranging from high cholesterol to cancer have triggered alarms across the U.S. and abroad.

McDonald’s Corp., Wendy’s Co., and Whole Foods Market, Inc., are among at least 15 companies that have announced policies in recent years to phase PFAS out of packaging they use or sell.

The more states and corporations ban PFAS from food packaging, the more that practice will become the industry standard and expectation, said Emily M. Lamond, an attorney with Cole Schotz P.C.'s environmental department.

It’s “death by a thousand cuts,” she said. “Each action creates public attention, creates that much more pressure and attention.”

Eight nonprofits added more pressure on Thursday. They petitioned the Food and Drug Administration to ban all PFAS, which accumulate in the body, from packaging and other materials that touch food.

Rep. Debbie Dingell (D-Mich.) also plans to reintroduce legislation requiring the FDA to ban any use of PFAS in food packaging. 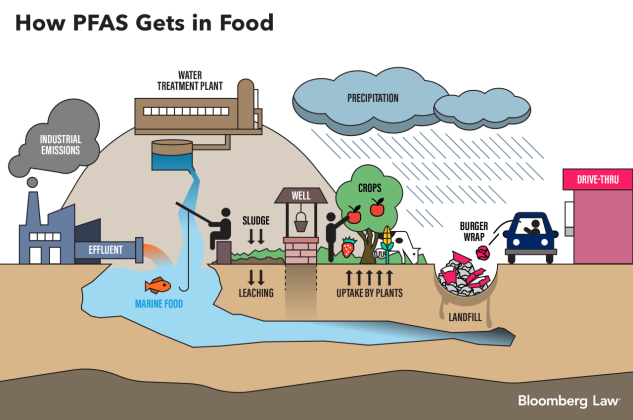 “Congress never intended persistent, toxic chemicals to be allowed in food or packaging,” she told Bloomberg Law in an email.

Meanwhile, an emerging area of consumer lawsuits over PFAS in packaging are adding more incentive for businesses to look for alternatives, which state and international agencies are identifying. Wax, silicone, denser paper, and clay-based coatings are among the possible PFAS substitutes for some products, these agencies have said.

All these actions and a basic argument are aiding change, said Mike Schade, who directs the Mind the Store campaign, which has pushed companies for years to phase out hazardous chemicals including PFAS from food packaging.

“Food packaging is used once,” he said. “You go to Burger King, buy a Whopper and fries, and throw away the packaging after scarfing them down. Yet the chemicals can last forever in the environment.”

Chipotle Mexican Grill, Inc.; Office Depot, LLC; and Koninklijke Ahold Delhaize NV, which owns grocery stores and food delivery services like Food Lion, the Giant Co., and Fresh Direct, are among more than a dozen companies with some type of PFAS in food packaging exclusion policy confirmed by Bloomberg Law.

Chipotle has eliminated PFAS from bowls used in the U.S. and Canada, with bowls in Europe to be targeted this quarter, according to a recent statement.

“Production is underway to phase out PFAS from other packaging items by the end of this year,” it said.

Wendy’s in April announced its goal of removing PFAS from to-go bags, sandwich wraps, fry cartons, and other “consumer-facing” packaging in the U.S. and Canada by the end of the year. And McDonald’s, which excluded some PFAS from food packaging in 2008, is working to remove all added fluorinated compounds from packaging used globally by 2025.

More corporations need to step up, said José Bravo, coordinator for the Campaign for Healthier Solutions. The group wants dollar-type store chains, which often serve as a de facto grocery store in low income neighborhoods and communities of color, to restrict PFAS and other chemicals from the products they sell.

But voluntary action isn’t enough, said Tom Neltner, chemicals policy director for the Environmental Defense Fund, which spearheaded Thursday’s regulatory petition. He pointed to the findings of a PFAS-sampling report released last month by a coalition of EU environmental groups.

In Denmark, which banned PFAS in paper and board food packaging in July 2020, none of McDonald’s french fry bags tested contained PFAS. But the french fry bags that McDonald’s sold in the Czech Republic and the United Kingdom did, according to the report.

The FDA has restricted some PFAS over the past decade. It secured voluntary agreements from the BASF Corp., E. I. DuPont de Nemours & Co., and Clariant Corp. in 2011 to phase out older “long-chain” PFAS that are no longer made or used.

Anchroma Management GmbH, AGC Chemicals Americas Inc., and Daikin America, Inc. all volunteered to phase out some newer, “short-chain” PFAS by the end of 2023 after FDA wrote to them with concerns in 2019.

Efforts to speed the phase out “will disrupt a safe, proven, and science-based process of moving to alternative solutions and may lead to less-studied replacements and a greater risk for the public,” Daikin said in a statement.

The FDA declined to say whether or how many PFAS will remain on the market after these newer chemicals are no longer used.

There is no set definition of PFAS; the term includes a diverse range of chemical compounds, FDA said. A small subset was recently identified as concerning and is being removed from food contact materials, the agency said in a statement.

“All food contact substances are subject to FDA pre-market review and must meet strict data requirements to demonstrate that their use is safe,” it said.

The petitioners sought four more FDA actions. The first three build on the concerns FDA has had about the PFAS it’s already worked to get off the market. Specifically the groups asked the agency to:

Finally, the agency should require industry submit data proving “per- and polyfluorinated compounds,” or PFCs, are safe, the petitioners said. They used the term PFCs because it includes more fluorinated chemicals than does the agency’s definition of PFAS, said Neltner.

The agency has 180 days to respond to the petition.

VIDEO: The EPA says more than 600 PFAS chemicals are in the marketplace in the U.S. States are racing to regulate PFAS, while the federal government lags.

Meanwhile, consumers are bringing their concerns to federal court.

Had the customers known PFAS was in the packaging, they wouldn’t have purchased it, because the chemicals don’t break down, the plaintiffs alleged.

Two of the cases, Ambrose v. The Kroger Co., and Digiacinto v. Albertsons Companies, Inc., are pending. A third case, Nguyen v. Amazon.com Inc., was dismissed after the plaintiff’s attorney couldn’t reach him for months.

The cases exemplify the trend to use more and more types of liability claims to target more companies in the supply chain, said Ally Cunningham, a partner in Lathrop GPM’s environmental and tort practice group.

“Win or lose, I think these cases will likely inform retailers of their decisions on carrying and advertising about PFAS-containing products,” Cunningham said.

Although though the case against Amazon was dropped, the company stopped selling single-use food service items made with PFAS, she said. “Even in the absence of regulation, the litigation is having an impact on the industry.”

The American Chemistry Council, which represents chemical manufacturers, objects “to actions taken that are not consistent with the available science,” spokesman Tom Flanagin said.

ACC is working with state and federal policymakers, including the FDA, to encourage “strong, science-based regulations,” he said.

The timing and specific policies that will drive the use of PFAS in food packaging aren’t clear, Lathrop GPM’s Cunningham noted. But, the trend to eliminate them is growing, and companies aim to please their customers, she said.

“Consumers probably would be pretty happy to know PFAS is being phased out of their food packaging,” she said.