Florida’s worst summer yet of toxic red tide may be over, but rising ocean temperatures driven by climate change suggest the worst is yet to come.

Red tide, made up of high concentrations of harmful marine algae known as Karenia brevis, has ravaged Florida’s western coast in 2018 but also traveled in recent years to Texas, Louisiana, and Mississippi. The red bloom arrived much like an unwanted guest who stays for months, only to depart mysteriously. Scientists aren’t clear on what triggers its departure.

But the algae exacts a hefty toll on local communities: Lost revenue for two neighboring Florida islands, Sanibel and Captiva, topped $19 million for July and August, with local revenue declining about one-third from 2017.

That figure understates the local damage, as it was drawn from a late summer survey of just 85 business owners and other employers, according to John Lai, president and chief executive officer of the Sanibel & Captiva Islands Chamber of Commerce.

As bad as the red tide algal blooms have been in Florida, they are probably going to get worse as the planet warms. Barring dramatic action, the world’s nations are now on pace to surpass the global goal to keep temperatures from rising more than 2 degrees Celsius (3.6 degrees Fahrenheit) since pre-industrial times and, if possible, 1.5 degrees Celsius.

Those are findings from the most recent Intergovernmental Panel on Climate Change report, which warns that a further warming of the oceans could have some profound impacts on marine species. A 1.5-degree Celsius rise will likely shift many to higher latitudes, increase ocean acidity, and decrease oxygen levels.

“In general, that means harmful algal blooms are more likely, not just red tide, but other algal blooms in other places” well north of Florida, such as the Chesapeake Bay, Baldera told Bloomberg Environment.

Nationwide figures tend to be rough estimates, but the Woods Hole Oceanographic Institution in Massachusetts conservatively pegged the total cost of red tide and other harmful algal blooms at $50 million a year. Roughly half that total was from losses to commercial fisheries, coastal recreation, and tourism, the research organization said.

In Florida, red tide has been concentrated mostly on the western coast, although smaller blooms and reports of fish kills also were detected on the eastern coast in Palm Beach County waters. 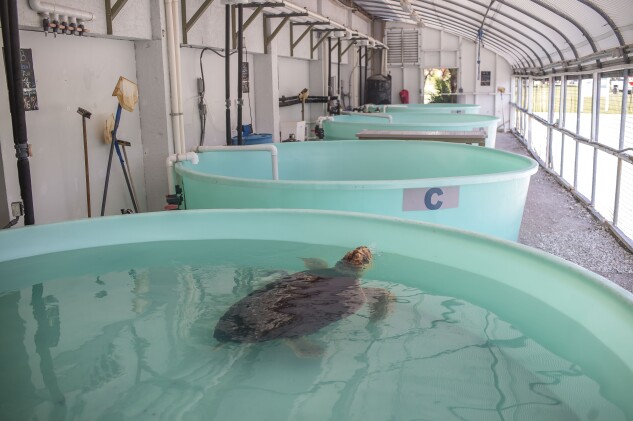 A sea turtle affected with red tide sickness floats in a tank while under treatment at the Mote Marine Laboratory and Aquarium in Sarasota, Fla.
Photographer: Zack Wittman/Bloomberg via Getty Images

Besides giving affected coastal areas an unsettling red patina and a noxious smell that repels visitors, concentrations of red tide release toxins that can decimate coastal fisheries and fish farms, as well as manatees, birds, and even an occasional whale shark. The toxins can threaten humans when they consume affected fish or shellfish, which can cause respiratory problems and worsen asthma.

The impact on Sanibel beaches for the summer of 2018 can actually be weighed: 2,200 tons of dead marine life cleaned off the beaches from July through September, Rae Ann Wessel, Sanibel-Captiva Conservation Foundation’s natural resource policy director, told those attending a September Capitol Hill briefing held by Citizens’ Climate Lobby.

“What I can’t share with you is a scratch and sniff,” she said. “Probably as horrific as seeing dead marine life on our beautiful beaches where we like to swim and play is the smell that just can’t be described,” she said, suggesting the stench could even pose a health threat to the foundation’s sea turtle staff and volunteers and marine scientists.

The Ocean Conservancy’s Baldera said it isn’t clear exactly why red tide forms, though nutrients from farms and residential developments likely play a part. There isn’t much local communities can do, though, once the blooms arrive, she said.

In the early 2000s, the National Oceanic and Atmospheric Administration studied the use of clays to control red tides with mixed results, and alternative clays recently developed in Asia appear to have fewer environmental impacts, according to the agency.

Red tide isn’t the only algae bloom affecting Florida, which has been beset by blue-green algae blooms in Lake Okeechobee and the St. Lucie River, while an algae bloom known as brown tide returned in 2018 to Indian River Lagoon on the state’s eastern coast.

Such blooms are an increasing risk for southeastern U.S. states and the Caribbean, according to a 2014 National Climate Assessment released by the U.S. Global Change Research Program in Washington.

“Climate change is expected to increase harmful algal blooms and several disease-causing agents in inland and coastal waters, which were not previously problems in the region,” the report said.

“For instance, higher sea surface temperatures are associated with higher rates of ciguatera fish poisoning, one of the most common hazards from algal blooms in the region,” it said. The algae that causes that food-borne illness—linked to eating fish carrying toxins produced by the algae—"is moving northward, following increasing sea surface temperatures.”

More monitoring is needed to better understand the links between severe storms and the arrival and disappearance of red tide, ocean conservancy and other groups said.

Other U.S. climate reports, including one in 2013 that focused on southeastern states, said storms have likely been spreading such blooms for decades.

The first documented bloom of the red tide algal bloom in Mississippi and Louisiana was in 1996 when Tropical Storm Josephine pushed a Florida bloom westward, according to the report. And Hurricane Katrina in 2005 transported the red tide bloom from southwest Florida to the north Florida coast.

While some environmental and conservation groups blame the agriculture sector because of nutrient releases, some say there is a clear need for more research and expanding the cooperation already underway between NOAA, the Florida Fish and Wildlife Conservation Commission, the state’s Department of Environmental Protection, and other agencies and conservation researchers.

It is too easy to point the blame on any one source, and too many people “would really like to believe that if only we were able to get control of one thing” red tide would disappear, Michael Crosby, president and CEO of Mote Marine Laboratory & Aquarium in Sarasota, said at the briefing in Washington.

“Red tide is simply not that simple,” Crosby said.

To contact the reporter on this story: in Washington at dscott@bloombergenvironment.com