President declared war on regulations in his first term, ordering that for every new rule issued two others had to be eliminated.

And even as Trump celebrated “slashing a record number of job-killing regulations” in his State of the Union address Tuesday night, he’s readying a second campaign: limiting the power of federal regulators such as the and the Securities and Exchange Commission to go after companies accused of wrongdoing. The White House calls it an effort to protect citizens from unjust government actions, but critics say it would dilute safeguards for workers, investors and the environment.

The potential changes, telegraphed in a request for comment published last week and a “transparency and fairness” executive order Trump signed last fall, target how federal agencies go after corporate rule-breakers and could confer an array of new protections on the accused. 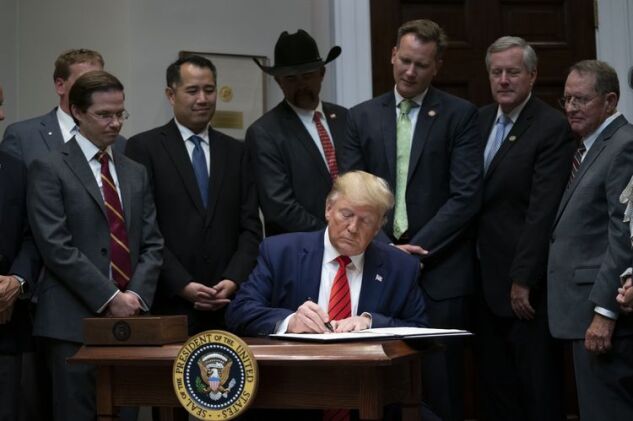 “In its first three years, the Trump administration has sought to repeal or roll back more than 100 environmental protbenections,” said , director of the Environmental Law and Policy Program at the . “Now it wants to make it more difficult to enforce the protections that remain.”

The said in its request for comment Thursday that it was contemplating “significant reforms” in the way federal agencies investigate, enforce and penalize regulatory violations. The goal, the agency said, was “protecting Americans against the unjust or arbitrary exercise of government power.”

That could include requiring agencies to prove they have cause to investigate or for them to turn over certain evidence. It also could change the way agencies such as the Agriculture Department and Food and Drug Administration issue violations during inspections of slaughterhouses and manufacturing facilities.

The budget office invited the public to weigh in with “concrete reform proposals” and provide examples of shortfalls in the current process. It also asked for ideas on how to limit the use of hearsay evidence, prevent multiple proceedings for the same offenses and ensure Americans aren’t coerced into “unfair” settlements.

The answers could help the administration justify a broad overhaul of agency enforcement that takes the form of binding guidance or an executive order directing changes in procedures, according to a person familiar with the White House strategy who asked not to be named before a formal announcement. Some changes would be beyond the Trump administration’s reach and would require action by .

Furthermore, the White House notice is only an information request and doesn’t actually prescribe changes. The administration may later decide against pursuing an overhaul based on the feedback it gets.

A senior administration official said the request isn’t designed to limit the ability to bring cases and investigations, but rather learn from the public how agencies can better respect the rights of all Americans during those inquiries.

For instance, he said, EPA investigations could bog down or be dropped altogether if agency attorneys must more routinely face off against large defense teams in hearings before administrative law judges.

“New layers of procedural requirements could really slow down the process and make it that much harder for there to be effective administrative enforcement,” Mintz said.

Although the request for comment doesn’t single out any agencies, administrative proceedings involving workplace safety, consumer protection, financial fraud and environmental violations make up the bulk of that activity today. And while the effects could apply across the federal government, they could be magnified at the EPA, which relies heavily on administrative actions to enforce rules governing air emissions, water pollution and fuel.

The move is akin to a prosecutor’s office taking a fresh look at its policies “to make sure that it was giving arrestees due process,” said Eric Claeys, a professor at ’s Antonin Scalia Law School.

Business groups welcome the Trump administration’s inquiry. Patrick Hedren, vice president for labor, legal and regulatory policy at the , said the White House is rightly asking “about what it’s like to be regulated.”

Agencies vary widely in their approaches to enforcement, Hedren said, citing meat processing facilities where inspectors who essentially monitor production lines 24 hours a day don’t always have the opportunity to check in with headquarters when making enforcement decisions. Instead, they must rely on handbooks and agency guidance that don’t always have protections for regulated facilities. Successfully appealing the decisions of on-the-ground inspectors is often a long-shot.

“You really have to weigh that against the burden of just doing what the inspector tells you to do, and that’s the kind of practical impact here that I think they’re trying to get at,” Hedren said.

Some of the potential changes would be welcomed by immigration lawyers defending foreigners in bitterly contested administrative cases, said David Freeman Engstrom, an administrative law expert at . However, the notice focuses its concern on “the rights of Americans” -- phrasing Engstrom said indicates the initiative is “looking to bolster due process values on behalf of corporate actors” rather than “the more vulnerable among us.”

The current approach creates tension between companies and agencies that view enforcement as a way to encourage good behavior, said , a partner at . Morrison has been on both sides of the issue, having previously spent more than two decades working on environmental enforcement at the EPA and .

“I understand how unsettling it is for a company to receive a notice of violation. It’s damaging to its reputation and disruptive to the business,” Morrison said. “At the same time, agencies believe compliance follows from the deterrent effect that comes from a strong enforcement program, which is not meant to feel comfortable or easy.”