EPA workers remove freon, compressor oil, mercury switches, and rotten food from refrigerators and other items at a New Orleans dumpsite to try to minimize the potential of soil and groundwater contamination.
Photographer: Chris Graythen/Getty Images

The Environmental Protection Agency is moving forward quickly with a reorganization of its 10 regional offices to minimize uncertainty for staff in those offices, Henry Darwin, the agency’s chief of operations and acting deputy administrator, told Bloomberg Environment.

Acting Administrator Andrew Wheeler announced the effort, which will reshuffle the regional offices to mirror EPA headquarters, in a Sept. 6 memo.

Former EPA officials and current employees are wary the reorganization could give the Trump administration an opportunity to shrink the agency. The effort could also allow political leadership a tighter rein over the regions—where approximately half of the agency’s career staff work and where much of the on-the-ground permit reviews, oversight, and enforcement operations occur.

“I wouldn’t doubt there is a back-of-the-envelope plan that talks about cutting enforcement resources once the reorganization goes into effect,” Mike Mikulka, president of the American Federation of Government Employees Local 704 and spokesman for Save the U.S. EPA, told Bloomberg Environment.

Changing up regional operations could affect state regulators, too.

Standardizing the daily work could help set common expectations, but having every region look the same could dilute the nuance that the current varied structures allow, based on states’ particular environmental needs.

“You would think this new administration, which is so keen in deferring to the states, would be sensitive to the need for the regions to have their ears to the ground and reflect the priorities of the states that they’re working with,” Robert Sussman, a former deputy EPA administrator in the Clinton administration, told Bloomberg Environment. 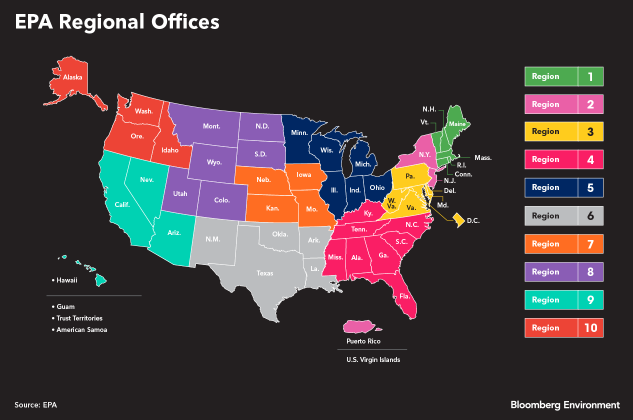 Under the EPA’s proposal, each regional office would have eight divisions, matching the setup of headquarters. Agency staff are now drafting the final detailed plan, which will need the OK from congressional appropriators.

Lawmakers haven’t said much yet about the EPA’s plan, but some raised concerns last year about job losses from potential closures of EPA offices in Chicago and Ann Arbor, Mich.

EPA leadership hopes the reshuffle will make implementation of agency regulations more consistent and give headquarters staff a better view inside the regions.

“It’s at times difficult for headquarters to see where the work is being done, and so it makes it difficult to have conversations and make decisions based upon resources, to evaluate operations and performance, and also to make sure policies are implemented as directed by headquarters in a consistent way across the regions,” Darwin said.

Currently, EPA regions can vary significantly in the ways they implement policy and work with states, Sam Sankar, executive director of the Environmental Council of the States, told Bloomberg Environment.

“If it’s done right, standardization can be a tool to improve things for everybody,” Sankar said. “A rising tide can lift all ships.” 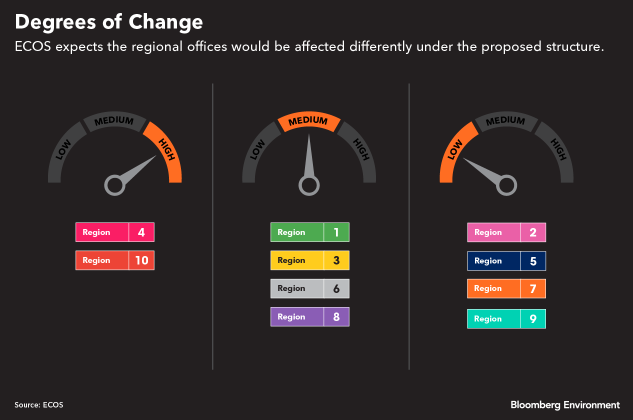 Former and current EPA employees still point to dips in enforcement and an ongoing staff exodus as cause for concern.

“I don’t think that the state or local industry here in Region 5 were saying they can’t deal with region give because it’s screwed up in terms of organizational structure,” Mikulka said. “We don’t have enough staff to do the work, and they’re diverting people’s attention to spend a lot of time on a reorganization.”

The union chapter that Mikulka leads represents more than 900 EPA Region 5 staffers. The office has lost 31 people this year, on top of the 77 who left in 2017, and replacements aren’t being hired quickly enough, he said.

EPA leadership announced in late June that the agency would hire 20 new staffers in Region 5—but since then, 11 employees have left and only two new staffers have been hired, Mikulka added.

Darwin said the realignment won’t immediately result in changing staff levels. But better visibility into the regional offices “may allow us in the future to reallocate resources based upon need between the regions,” he added.

That doesn’t necessarily carry ill intent—internal tension always has existed about the varying size of the regions, Stan Meiburg, a former deputy regional administrator in regions 4 and 6, told Bloomberg Environment.

Region 4 in the Southeast, for example, serves more states and people than any other region, but it doesn’t have the largest staff, added Meiburg, now director of graduate programs in sustainability at Wake Forest University.

But leadership at the regions may be in jeopardy, Sussman suggested, because if positions are redefined, it could open the door to replacing division heads.

“This could be an effort to exercise more control over who the key people are in regional management,” he said.

Darwin, though, dismissed the idea the administration would be changing division heads. Some regions may need additional leadership if new divisions must be created, “but it is not intended to be an opportunity to demote existing leaders from their current positions,” he said.

The EPA last reorganized in the mid-1990s, under former Administrator Carol Browner. The effort consolidated the EPA’s enforcement activities into a headquarters office and gave the regional offices the latitude to incorporate their differences into their design, Browner told Bloomberg Environment.

The process also invited EPA staff participation through public forums, she said. That could make a difference this time, too.

“Right now the agency is in a blue place,” Browner said. “How they go about it is important. Is it imposed on people, or are they trying to help build it?”

State regulators want to ensure a smooth transition at the regions, their primary EPA point of contact.

“The endpoint is good, but if the change takes three years and causes chaos in the interim, that’s not good,” Sankar said.