A hiker makes his way up a trail to Calf Creek in the Grand Staircase-Escalante National Monument on May 10, 2017 outside Boulder, Utah. President Donald Trump later announced he was cutting the size of the national monument nearly in half, sparking litigation.
Photographer: George Frey/Getty Images

“Frankly he had more to work with,” Pendley said of Trump, during an exclusive interview Oct. 10 at the bureau’s National Operations Center in Lakewood, Colo.

“President Reagan was responding to one-term Jimmy Carter, which for Westerners was bad enough,” Pendley said. “But President Trump was responding to 16 years of [Bill] Clinton and [Barack] Obama and righting the wrongs during that.”

Interior Secretary David Bernhardt announced recently that Pendley, a Colorado-based natural resources attorney, will continue as acting director of the BLM at least through Jan. 3, 2020.

Pendley in recent years called for the sell-off of public lands and abolishment of two Utah national monuments while serving as president of the Colorado-based Mountain States Legal Foundation.

And Pendley in 1981 called for the sale of all BLM lands east of the Mississippi River, an idea he says he no longer supports.

Since starting in his new acting role, Pendley has told lawmakers that the wholesale transfer or disposal of public lands is off the table. The BLM, which is part of Interior, manages lands that total about 10% of the U.S., with most of that land in the West.

The Trump administration’s changes to the federal processes for approving oil and gas, mining, and other natural resource projects on lands in the West obviates the need for a new Sagebrush Rebellion, Pendley said, referring to a movement in the 1970s and 1980s to limit federal control of public land in the West.

“Here’s the thing that ended the Sagebrush Rebellion during Reagan,” Pendley said. “Reagan adopted a good neighbor policy. The rebellion ended when Reagan came in and adopted policies that were in recognition of state sovereignty. And that’s what President Trump has done.”

Pendley addressed a fear of some environmental groups that his assignment indicates the intent by the administration to sell off public lands. 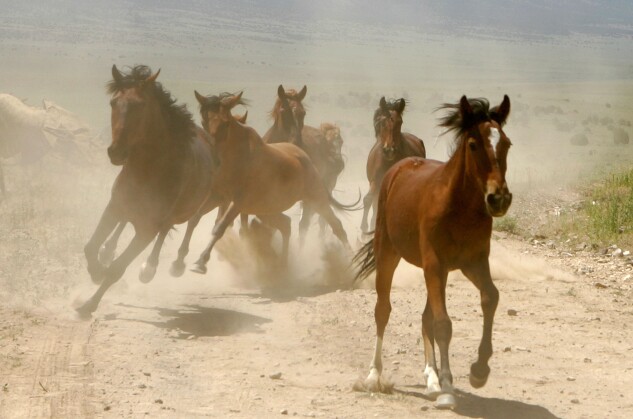 Asked if environmental reviews under the National Environmental Policy Act have been streamlined too much, Pendley said: “I think we’re mandated to do it. The president signed an executive order, and he said, ‘Cut the paperwork.’ Frankly, I don’t think anybody in the country would dispute the fact that NEPA is where projects go to die. Things have been studied to death. There comes a time when you have to say, ‘Ok, do we know enough to move forward?’”

Pendley said the question of whether Bernhardt will nominate him as permanent BLM director, subject to Senate confirmation, “is totally out of my hands, and I don’t know if it’s in the cards.”

Asked if he believes in anthropogenic climate change and the contribution to climate change from the extraction of fossil fuels, Pendley said: “I’m not a scientist, I’m a lawyer. I take my lead from the secretary” of Interior, Bernhardt.

Bernhardt said the “consequences of climate change need to be understood and addressed,” Pendley said. “I’m a Marine, I follow orders. That’s the secretary’s position, that’s my position.”

CNN reported this week that Pendley on multiple occasions has denied the established science of climate change. It noted that in 2011, Pendley wrote that “public support for the fiction of man-made climate change” was “at an all time low.”

Pendley said the BLM, in complying with NEPA and the Federal Land Policy and Management Act, is mandated to take a hard look at several policy considerations, like endangered species, and provide the best information for decision makers.

He also said that “courts are telling us you need to look at climate change when you do these NEPA documents, when we do EISs [environmental impact statements],” Pendley said. “Look at greenhouse gases, look at all these things that go into addressing climate change.”