Pollution drifting across the Pacific Ocean is to blame for air quality problems in the Salt Lake City region, say officials in Utah, where the air has deteriorated enough that the metro area soon could have to meet more stringent requirements under the Clean Air Act.

The state is calling upon a seldom-used Clean Air Act provision to avoid the stricter National Ambient Air Quality Standards designation for ozone—a long-shot bid that reveals gaps in the complicated quest to enforce protective ozone rules in western regions.

If EPA agrees with Utah’s submission, other states could try getting out of cleaning up their bad air by using a provision of the Clean Air Act intended only for areas near the U.S. borders with Canada and Mexico, critics of the state’s request say.

That could, in turn, let some of the West’s biggest polluters, including the mining and petroleum industries, off the hook, and lead to worsening air in the region, critics said.

Utah is the first state to submit an international transport demonstration request under Section 179B of the Clean Air Act citing pollution in an area not adjoining an international border. The Environmental Protection Agency said it has received fewer than 10 179B demonstration requests from states since the section was added to the Clean Air Act in 1990.

“If it weren’t for the pollution blowing in from Asia, we would meet the standard,” said Bryce Bird, director of the Utah Division of Air Quality in the state Department of Environmental Quality. “What we’re seeing is with warmer and drier summers and an international air component we can’t control, it’s going to be very difficult to meet it.”

Experts believe that Utah’s move to skirt tougher ozone pollution designations is an uphill climb, but Western states do have unique air quality problems rooted in wandering pollution from other sources, like states or wildfires.

Utah’s request to the EPA is designed to show the Northern Wasatch Front area, which includes Salt Lake City and environs, is plagued by pollution drifting across the Pacific from Asia and therefore beyond the state’s ability to control. The EPA issued guidance in 2020 on how to prepare Section 179B demonstrations. 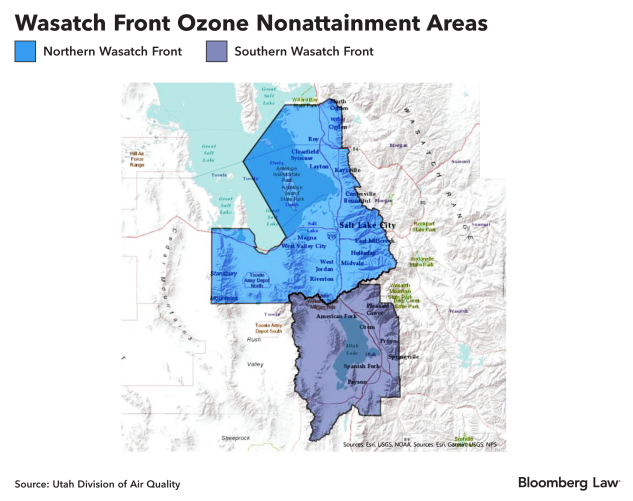 A successful 179B demonstration would provide relief from the EPA’s bumping the metro area from marginal to moderate nonattainment with ozone standards next year, Bird said.

Ozone pollution in the Intermountain West is thorny, according to Dorsey & Whitney LLP partner Megan Houdeshel, in part because states may not have enough options to regulate on top of the few power plants or other emission sources that already must comply with requirements under State Implementation Plans—which are how states outline how they’ll comply with NAAQS.

“How much can a state do when it’s already controlling the sources on the ground in its particular jurisdiction, and yet it’s still having these problems?” Houdeshel said.

To shore up its demonstration, Utah relied upon a study funded by the Utah Petroleum and Utah Mining associations, which pressured state regulators to submit the request in the first place, environmentalists said.

“The Department of Environmental Quality has allowed themselves, their mission, and their personnel to be hijacked by our biggest industrial polluters,” said Brian Moench, board president of Utah Physicians for a Healthy Environment. “The governor’s office and powerful state legislators are capitulating to the demands of the petroleum association and the mining association,” he said.

It’s hypocritical for Utah “to sell coal to Asian markets and then complain about the burning of coal in Asian markets,” he added.

“They’re definitely talking out of both sides of their mouth, for sure,” said Jeremy Nichols, climate and energy policy director for WildEarth Guardians. Globally transported air pollution is not so great that it forecloses taking action at the local level to protect public health, he said. “Background is a problem, but it doesn’t mean you’re off the hook,” he said.

An industry in Colorado backed an effort to seek a “blame-it-on-China” exemption under Section 179B, but Gov. Jared Polis (D) rejected the idea, Nichols said.

“Utah’s demonstration is not about clean air, it’s about providing cover for industry,” Nichols said. This would set a horrible precedent and completely twist up efforts to clean up the air throughout the country. EPA should send it back to Utah with a big ‘denied’ stamp on it.”

In response, Utah’s DEQ said it used information from the two industry associations to supplement the state analysis and meet the deadline for the 179B application.

“Balanced regulation considers the input of all stakeholders, and is ultimately directed by the policy and laws enacted by elected officials,” the DEQ said. “The state is still “obligated and committed to reducing the emissions under our control.”

‘But for’ Global Emissions

Section 179B exempts areas with poor air quality that can prove they’d be able to adhere to National Ambient Air Quality Standards “but for” international pollution that sets them over the edge, Bird said. “Without relief from Section 179B, it’s going to be very difficult for us to meet the standard,” he said.

But the spirit of the provision has been geared towards areas adjacent to other nations, according to senior Center for Biological Diversity attorney Robert Ukeiley.

“Congress labeled 179B ‘international border areas,’ so it’s pretty clear to me that Congress meant it to apply to border areas,” Ukeiley said. “In the past, it’s been applied to places like Nogales, Arizona, which you can almost literally see the pollution from Mexico.”

And even with traveling pollution, it’s the state’s job to meet health-protective clean air laws regardless of the source, according to University of Houston law professor Victor Flatt.

“I get the frustration of the state, certainly, but the bottom line is, they’re supposed to protect the health of their citizens,” he said. “Just because it’s coming from somewhere else doesn’t give you the right to let your citizens have bad air.”

Background pollution coming in from other areas mixed with Utah’s high altitudes and climate do pose a challenge for regulators. Houdeshel noted that oil, gas, and other facilities are already complying with stricter regulation in accordance with particulate matter standards.

“We’re positioned in the Intermountain West in somewhat of a unique situation where precursors to ozone over the last 10 years have dropped,” Houdeshel said. “The PM 2.5 moderate and serious SIP revisions have already required major sources to reduce the same precursors to ozone.”

Some experts point to federal regulation as a gap-filler for emissions that may be harder for states to rein in, such as stricter vehicle emission, wood stove, and power plant standards. In the meantime, Flatt said, the responsibility still lies with states.

“If you’re going to talk about the deficiencies of the Clean Air Act, I think that’s fair,” Flatt said. “But I do think it is important to remember that protecting public health that’s a major piece of our environmental laws, you don’t get to hurt public health just because it’s cost efficient.”

There is no statutory deadline for EPA to respond to Utah’s request, agency spokesman Tim Carroll said.

To contact the reporters on this story: in Washington at jhijazi@bloombergindustry.com; in Denver at abaltz@bloomberglaw.com