The EPA faces a deluge of tight deadlines over the next 24 months as it must make decisions that will affect dozens of chemicals that companies make and use every day.

Chemical manufacturers such as Olin Corp., BASF Corp., and the Chemours Co., along with producers of greases, glues, and sealants that keep delivery trucks on the road, cargo trains moving, and machines working, are the types of companies that could be caught in the backwash by the magnitude and pace of information the agency will need to make those decisions.

June 22 marks two years since Congress overhauled the Toxic Substances Control Act (TSCA), but the Environmental Protection Agency won’t take a celebratory break. Instead, the agency must release a final rule and additional guidance by that date and keep working.

Its staff must jump from evaluating 15 chemicals in commerce this year to screening and evaluating 50 chemicals, and proposing restrictions on five in 2019 to meet deadlines set by the TSCA amendments of 2016.

The EPA’s workload means chemical and other manufacturers will need to provide a volume of information about chemical exposures to the agency at a pace companies may not fully appreciate, Martha Marrapese, a chemicals and consumer products partner in Wiley Rein LLP’s Washington office, told Bloomberg Environment.

“There’s a big tidal wave approaching and people have to figure out how to get in front of it,” Stephen A. Owens, a partner specializing in chemical regulatory issues in the Phoenix office of Squire Patton Boggs, told Bloomberg Environment.

The agency may demonstrate that it can effectively review the potential ways chemicals could harm people and the environment, and take action if they do—a core reason Congress overhauled the chemicals law in 2016, attorneys and consultants told Bloomberg Environment in recent interviews.

But the EPA’s already-stretched staff may be unable to meet the law’s deadlines, said Rena I. Steinzor, an administrative and environmental law professor at the University of Maryland’s School of Law.

Or the agency could meet the deadlines by doing “sloppy stuff” that ignores real health and environmental risks, she said.

Either way, federal courts are likely to weigh in on rules the EPA issued in 2017 describing how it would carry out its new responsibilities under the revised chemicals law. Court losses could send the EPA back to the drawing board or wins may endorse its choices.

Court Rulings in the Mix

The agency already is being sued in three federal circuit courts for its interpretations of TSCA, and future decisions are likely to spur more lawsuits, Owens said.

Court decisions in these cases may come by the end of this year and in 2019, attorneys said.

“I don’t think any of these lawsuits will have an effect on implementation,” said Karyn Schmidt, a senior director and attorney at the American Chemistry Council, said. “EPA took a legally sound and policy smart approach to implementing the law.”

But, Owens said, “It’s entirely possible the agency could lose one or more arguments in the lawsuits.”

Depending on the courts, the agency could have to start all over again and rethink how it is supposed to analyze chemicals generally and redo analyses of specific compounds it already has worked on, Owens said.

Regardless of the court decisions, the agency will be “challenged” to meet its coming workload, according to the attorneys, consultants, and other individuals Bloomberg Environment spoke with.

“I confess to being worried,” Lorenz R. Rhomberg, a risk assessor with Gradient, a consulting firm, told Bloomberg Environment.

The agency’s staff is carrying out many TSCA-mandated tasks for the first time, said Rhomberg, who joined Gradient’s Cambridge, Mass., office after working as a biostatistician at the agency for 10 years.

Staff will face a lot of questions about how to interpret general mandates in carrying out their daily tasks, he said.

For example, the law requires the agency to use systematic procedures to identify, select, assess, and summarize the best available science, Rhomberg said. It’s unlikely to be clear how to apply those criteria to specific studies, he said.

The EPA’s staff is essentially being told to “hurry up and do this thing that I can’t exactly tell you what it is yet,” he said. 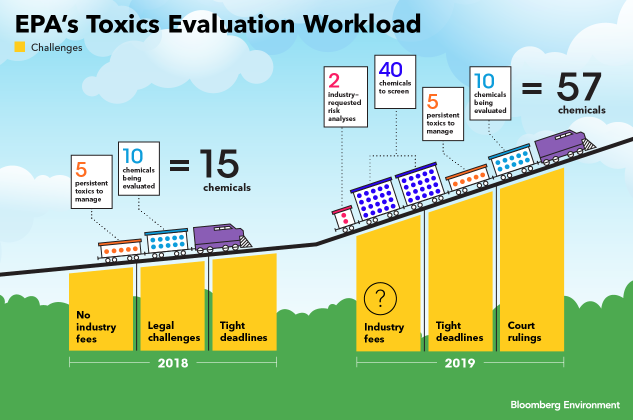 Imminent deadlines the EPA is expected to meet by June 22 include issuing a final rule requiring companies to report their intentional production or use of mercury and releasing a plan to reduce, refine, or replace vertebrate animal testing.

Deadlines the EPA faces over the next two years include:

The agency also has said it will issue a final rule restricting some paint and coating stripper uses of a solvent called methylene chloride, and, at the request of one or more manufacturers, it may begin to evaluate the risks posed by two fragrance chemicals.

The EPA also must stay on top of other TSCA requirements while it analyzes many questions involving dozens of chemicals used by companies and consumers. These other tasks include reviewing hundreds of new chemicals to decide whether they can enter commerce—a top priority of the chemical industry.

The agency also must craft a final rule by 2020 describing how it will review thousands of chemicals that have specific identities it keeps secret. It must decide whether those chemical identities must be kept out of the public’s eye to protect companies’ proprietary information.

The EPA needs more staff and money to manage its oversight of both existing and new chemicals, said Lynn Bergeson, a managing partner of Bergeson & Campbell, PC in Washington.

The agency’s chemicals office “will be torn constantly” over the next two years as to where to deploy its resources, she said.

The 40 new staff members the EPA has said it will hire this year—combined with a planned reorganization of the chemicals office—may help, Bergeson said.

“We have been very successful thus far in meeting our deadlines and are committed to continuing to build on that success,” the EPA told Bloomberg Environment.

“We have every expectation that it will continue to meet its deadlines,” said Michael P. Walls, vice president of regulatory and technical affairs at the American Chemistry Council. “We’ve seen EPA’s effort really focus on implementation and doing a good job,” he said.

The deadlines the EPA faces and that chemical manufacturers will seek to help it meet will “really create confidence” in the law, he added.

All sorts of manufacturers—not just chemical producers—have a critical role to play in helping the EPA achieve the chemical law’s mandates, other attorneys said.

If they have not, “now is the time” to provide the EPA with exposure research and other information, he and others said.

Nearly everyone Bloomberg Environment interviewed stressed that the agency’s coming mountain of work isn’t the beginning of a never-ending struggle.

As the agency gains experience, the work will get easier, said Richard E. Engler, director of chemistry with Bergeson & Campbell, and Rhomberg, both of whom worked at the EPA.