A dead tree frames a former marina inlet on the Salton Sea in California.
Photographer: Eva Hambach/AFP via Getty Images

La Cienega de Santa Clara, sitting at the edge of the Sonoran Desert in northwestern Mexico, appears like a mirage. Lagoons filled with cattails are a balm to dry eyes after a dusty, hourlong ride from the U.S.-Mexico border.

Fed by water draining from farms in the Wellton-Mohawk Irrigation and Drainage District in Arizona, the Cienega—created by an engineering accident in the late 1970s—is the largest brackish water marsh in the Colorado River region, spanning about 40,000 acres.

North of the lagoon is the Salton Sea, which also relies on drain water from California farms in the Imperial Irrigation District.

Now these wetlands, as well as the hundreds of species of birds and fish that live in them, may be at risk.

Overuse and overallocation of Colorado River water coupled with an ongoing drought are causing water levels to drop in upriver Lake Mead, the massive reservoir formed by the Hoover Dam near Las Vegas.

Lake Mead supplies water to cities and irrigation districts in Arizona, California, and Nevada. Lower water levels in Lake Mead could reduce how much water flows into the Salton Sea and the Cienega, while high temperatures increase the rate of evaporation, harming the fish and the birds that live there, according to the Oakland-Calif.-based nonprofit Pacific Institute.

In 2000, Lake Mead was nearly full, but drought has brought the reservoir to lows not seen since its creation in the 1930s. Lake Mead’s water level has been flirting close to 1,075 feet, the level at which a shortage would be declared and tighter limits imposed on water allocations to Arizona and Nevada.

California would not yet face tighter limits, as it enjoys senior water rights. But the state could agree to cuts down the road under a separate drought contingency plan it is working out with Nevada and Arizona. 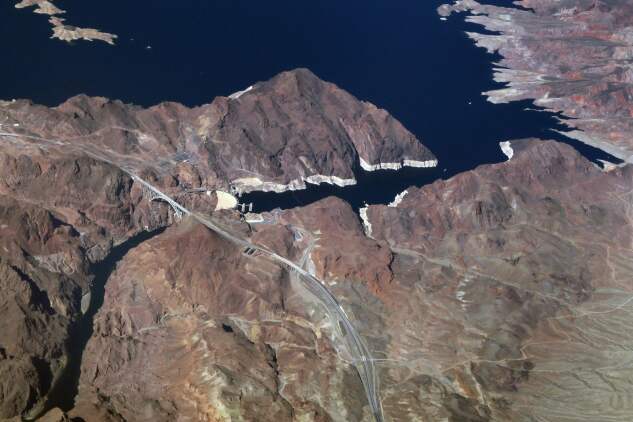 “Both water bodies [the Cienega and the Salton Sea] definitely and clearly depend on agricultural runoff from irrigation districts,” Michael Cohen, Pacific Institute’s senior research associate, told Bloomberg Environment. “Reducing the amount of that runoff—even if the volumes don’t drop to zero—will have clear and measurable adverse impacts on the water bodies.”

As long as water is flowing and irrigating the fertile farmland in Central California and Arizona, the habitats will survive. But if the volume of water dwindles, and agricultural runoff is viewed as a viable supply of water for municipal uses, then the region is in trouble. 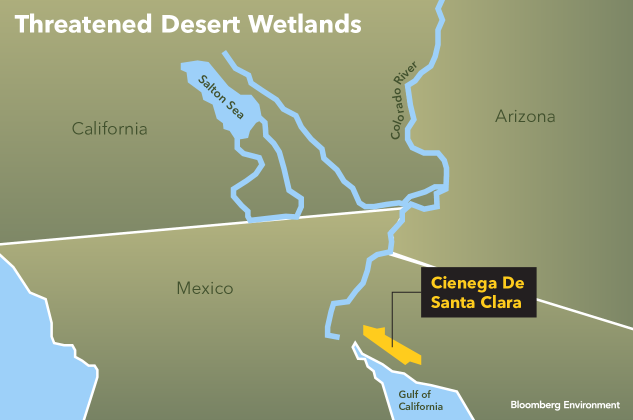 The lagoons of the Cienega are home to more than 200 species of birds, including pelicans and the endangered Ridgway’s rail.

These birds are at risk if less water flows to the Cienega.

The birds, and the fish they eat, also could be at risk if the Bureau of Reclamation ever decides to send brine-rich water from the Yuma Desalting Plant to the Cienega, according to Jennifer Pitt, National Audubon Society’s Colorado River program director.

The Bureau of Reclamation’s desalting plant in Yuma, Arizona, though not currently operational, is designed to send desalinated water to the Colorado River—while the brine that’s filtered out would be pumped to the Cienega.

Major water suppliers desperate for any additional sources of water have eyed it for years as an option to meet the needs of their burgeoning cities, while California, Nevada, and Arizona try to cobble together a plan to head off potential shortages in Lake Mead. They have been pushing the states to consider the desalting plant option.

“One of the tools available for them to meet that commitment is the operation of the Yuma Desalting Plant,” said DeEtte Person, a spokeswoman for the Central Arizona Project, a 336-mile long aqueduct system that supplies water to Phoenix and Tucson.

Currently, there’s a legal hurdle to use of the desalting plant to help alleviate drought: It’s not deemed a “viable water supply” under the latest agreement, or Minute 323, to the 1944 U.S.-Mexico water treaty, Patricia Aaron, a spokeswoman for the Bureau of Reclamation, told Bloomberg Environment. The amendment to the treaty spells out approaches for sharing Colorado River water, reducing risk, and funding new conservation and environmental programs to protect habitats.

“If the Yuma Desalting Plant was considered, it would require consultations with multiple stakeholders, including Mexico,” Aaron said.

Patricia Mulroy, senior fellow for climate adaptation and environmental policy at the University of Nevada, Las Vegas’ Boyd School of Law, told Bloomberg Environment there is no political will or backing to run the desalting plant, primarily “because it will dry out the Cienega, and nobody wants that.”

The low Lake Mead water levels also could threaten the Salton Sea, which is the largest yet shallowest lake in California, spanning 335 square miles, according to the U.S. Geological Survey.

This 35-mile-long, 15-mile-wide sea—created when floodwaters from the Colorado River overflowed its banks in 1905—has an average depth of 21 feet and is a “virtual chokepoint” for the Lower Colorado River Basin. It receives drainage rich with salts; algae-forming, nutrient-laden fertilizers; and pesticides from the farms in the Imperial Irrigation District, Cohen said. 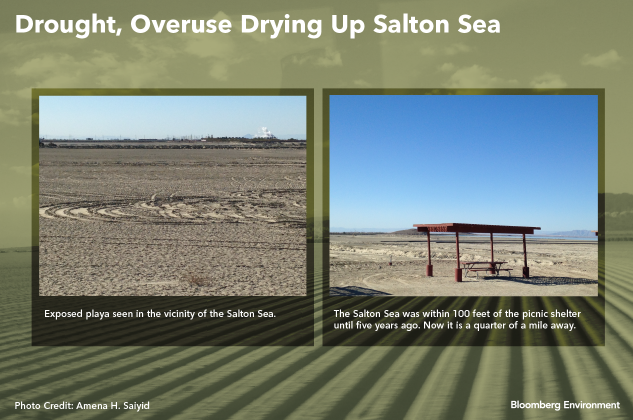 Earlier this year, a motorboat carrying journalists, including one from Bloomberg Environment, wended its way through the cattails. Watching great egrets fly over the Salton Sea and Caspian terns sitting atop driftwood, ornithologists and conservation scientists, including Cohen, worried that soaring temperatures coupled with low river flows and detrimental water agreements are shrinking the size of the sea, exposing more lakebed and creating more dust.

The most immediate risk is posed by a 2003 California-brokered agreement that allows some water to be transferred from agricultural uses in the Imperial Valley to San Diego, resulting in less runoff for the sea, according to the U.S. Geological Survey Salton Sea Office.

In the next 10 years, the Salton Sea could see its water levels fall by 15 feet and its salinity triple, exposing more than 60,000 acres of playa, or flat, dried up land, and creating fine and coarse dust, Cohen said.

“You can imagine what that will do for human health as Imperial Valley is already not meeting national air quality standards for fine particulates,” he said.

A 10-year plan for the Salton Sea set up by California in 2017 is expected restore about 15,000 acres of wetlands, but it is just getting off the ground.

While the Bureau of Reclamation doesn’t expect to have to declare a shortage at Lake Mead before 2020, the risk “remains high and growing,” Sandra Postel, director the Global Water Policy Project, told Bloomberg Environment.

But the worst might be avoided if Arizona, Nevada, and California reduce water consumption, banking more water in Lake Mead. “This is an all hands on deck moment,” Postel said.

— With assistance from Brenna Goth.