States and water utilities want the EPA to get more information that could help them identify companies, industries, and federal facilities that release “forever chemicals” into the environment.

The call for more information comes even as the Environmental Protection Agency continues to allow more such per- and polyfluoroalkyl substances (PFAS) for use in commerce, with more than 400 approved since 2006.

“This information is especially important to the state governments we represent, because states commonly bear the brunt of remediation costs when chemicals like PFASs are mismanaged or discharged to the environment,” Democratic attorneys general from 18 states wrote in Feb. 3 comments asking the EPA to add PFAS to its Toxics Release Inventory (TRI).

At least seven states and water utilities have already spent more than $150 million addressing PFAS contamination in drinking water, landfills, and other situations where the environment and people have been exposed to the chemicals, according to an analysis Safer States, a coalition of environmental organizations, released Tuesday.

“Public utilities—who are not manufacturers or sources of PFAS but receivers who generally must accept whatever has been discharged into their collection systems—are beginning to evaluate the makeup of industrial users in their communities to determine if they may be sources of PFAS,” the National Association of Clean Water Agencies told the EPA recently.

Many publicly owned clean water utilities, which treat wastewater, can require companies to pre-treat their industrial discharges if the materials in those effluents interfere with the treatment and to protect the quality of the sludge that water utilities generate. The decision to allow a utility to require pre-treatment is typically reached in consultation with states, according to EPA information.

The 18 attorneys general, two water utility associations, state environmental agencies, nonprofit groups, industries, and others commented on an idea the EPA floated in December through an advance notice of proposed rulemaking (RIN:2070–AK51).

The agency asked for views about adding some PFAS to the toxics inventory, which would require companies to report their production, processing, use, or recycling of a TRI-listed chemical.

Effective Jan. 1, the EPA added 160 PFAS to the toxics inventory to comply with requirements in the National Defense Authorization Act. But states and trade associations representing water utilities asked for more chemicals to be added.

Companies involved with PFAS include many mining, utility, manufacturing, and hazardous waste businesses. Federal facilities also are required to report.

The threshold of a chemical that triggers the reporting requirement varies. Some regulated and persistent chemicals have lower thresholds than the standard 25,000 pounds per year processed, used, or recycled cutoff. The reporting threshold for the 160 PFAS added to the inventory through the defense act should be 100 pounds annually, that law said.

Many PFAS are persistent, meaning they don’t break down in the environment. Some also cling to proteins in the human body for years. Scientific studies of a few of these chemicals also show they may increase cholesterol and the risk of cancer, among other health problems.

PFAS are used in so many commercial products that knowing which industrial or federal facilities release significant quantities will help identify sources, the National Association of Clean Water Agencies told the EPA.

There are about 600 PFAS in commerce in the U.S., according to the EPA. The agency has refused repeated requests to publicly identify those chemicals, even though its notice sought information about them.

Thousands more PFAS have been identified by the Organization of Economic Cooperation and Development.

The 18 attorneys general and Minnesota Pollution Control Agency urged the EPA to add all PFAS to the toxics inventory as a single category, with the attorneys general highlighting 20 specific chemicals that should be priority additions. Wisconsin’s Department of Natural Resources agreed with the category approach, but listed 36 specific PFAS it has found in the state that should be a top priority for addition.

Multiple stakeholders recommended at least eight PFAS be priorities to add to the toxics inventory: 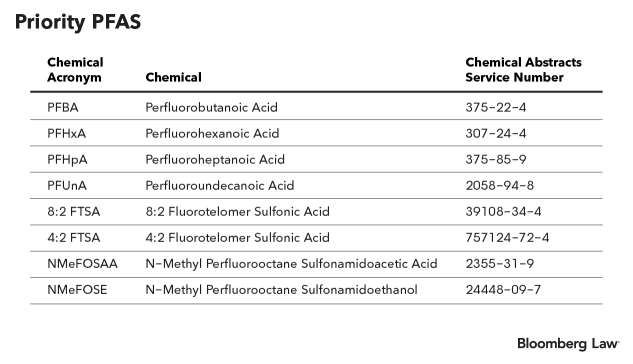 Industry trade associations didn’t weigh in on the specific PFAS that states and water organizations highlighted as priorities, but objected to adding all such substances, or categories of them, to the inventory.

“We are deeply concerned about suggestions that this large group of disparate substances can be considered a single class (or a few subclasses) for the purposes of regulation and public policy,” the American Chemistry Council said.

“PFAS are a very diverse family of chemistries with unique profiles and it is not scientifically accurate nor appropriate to treat them the same,” Tom Flanagin, director of product communications for the council, said in response to questions.

Likewise, the U.S. Chamber of Commerce and 16 other trade associations said the chemicals “have a wide range of potential hazard and exposure profiles, including compounds and groups that would not be expected to be of health or environmental concerns.” The trade associations included Airlines for America, the Council of Industrial Boiler Owners, the National Mining Association, and TRSA, which represents companies providing linen, uniform, and facility services.

Commenting organizations urged the EPA to use a spectrum of thresholds ranging from 0.1 gram to greater than 100 pounds, when scientifically justified.

Minnesota called for a threshold closer to the 0.1 gram end of the range, according to the state’s Pollution Control Agency. Minnesota’s largest hard chrome platers may use only a few pounds of PFAS per year, it said. If those companies released only up to 1 gram per year into a modest-sized lake, that could eventually cause the PFAS levels in that lake to exceed the state’s water quality criteria, it said.

The EPA since 2006 has allowed manufacturers of 272 new PFAS to make those chemicals under an expedited agency review process called the low volume exemption, according to information the agency provided to Rep. Paul Tonko (D-N.Y.).

The exemption, if granted, allows chemical manufacturers that want to produce 10,000 kilograms (22,046 pounds) or less of a new chemical to proceed to production without the EPA’s full 90-day risk evaluation process, used to determine whether a new chemical can be produced or if some restrictions are needed.

The 3M Co. and DuPont were the original companies developing and producing PFAS, dating to the 1940s. Chemicals made with the particular PFAS 3M, DuPont, and the Chemours Co., a Dupont spinoff, have produced have been used by hundreds of companies such as Wolverine World Wide Inc. and W. L. Gore & Associates Inc. to make thousands of products including semiconductors, sticky notes, and shoes.

The original PFAS manufacturers, Chemours, and some companies using the chemicals are the subject of several major PFAS-related lawsuits and have paid millions of dollars in settlements so far.