New York’s plan to invest $200 million in energy storage could help boost demand for what new energy storage company Fluence, a creation of Siemens and AES Energy, sees as a growing market.

New York’s goal to build 1.5 gigawatts of energy storage by 2025, announced on Jan. 2, is part of its plan to generate half of its electricity with renewables by 2030, including enough power from offshore wind farms to power more than 1.2 million homes.

The state’s energy-storage target and regulatory support could be a blueprint for other states as they consider projects, said Ray Hohenstein, market applications director for Fluence, which was formed Jan. 2 and is based in Arlington, Va.

Fluence was created as a way for AES Energy, which has experience developing projects in the U.S. and Latin America, and Siemens, which has European experience, to capture the global energy-storage market, Fluence Chief Operating Officer John Zahurancik said.

The company sees a quickly growing market in the U.S., as utilities to turn to batteries to help them replace aging power plants, used only during peak electricity demand. The batteries would be built alongside new wind and solar projects, he said. 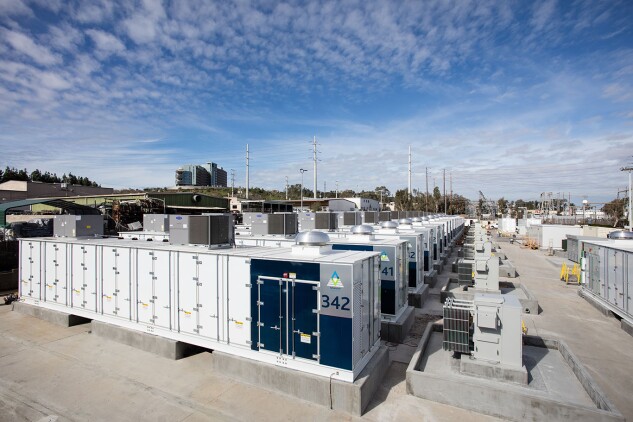 New York is among a growing number of states that have adopted energy-storage mandates. In 2013, California required the state’s major utilities to install 1.3 gigawatts of energy storage by 2024. Oregon and Massachusetts followed with their own mandates.

Energy storage, primarily large utility-scale batteries, helps utilities integrate wind and solar power onto the electric grid by storing renewable electricity generated when it’s not needed so it can be used when electricity demand is high.

Storage helps power-grid operators handle the sudden dips and spikes in wind and solar power generation when the wind picks up and suddenly drops off, or clouds obscure the sun.

New York is “agnostic” about the storage technology the state will support, but battery-based projects are expected to be common, said Janet Joseph, senior vice president for strategy and market development for the New York State Energy Research and Development Authority.

The state also will advance policies that support other emerging non-battery-based energy storage technologies, she said.

Other types of energy-storage technologies include flow batteries, which store electrical energy in a liquid solution, and pumped hydro, which involves pumping water uphill into a reservoir to store it and then releasing it through a hydroelectric turbine when power is needed.

But lithium-ion batteries have the edge on cost, Goldie-Scot said.

Lithium-ion battery costs fell 80 percent between 2010 and 2017, driven mainly by the electric vehicle market, he said.

“Really over 90 percent of commissioned stationary batteries over the last couple of years have been lithium-ion,” he said. “Lithium-ion has economies of scale driven by the transport market. There’s just a ton of investment globally.”

The automaker Tesla demonstrated how large lithium-ion batteries can power entire towns when the company switched on the world’s largest battery in South Australia in December, a 100 megawatt battery that now provides power to 30,000 homes.

Tesla declined to comment when asked by Bloomberg Environment about its U.S. battery development plans.

Fluence is developing a comparable or possibly larger battery in Long Beach, Calif.

Fluence said it has no announced projects in New York. But the company sees battery storage development as possibly outpacing the state’s 2025 goal, Hohenstein said.

“We are beginning to see large scale battery energy storage systems embedded in many new energy bids—from solar and wind farms to gas plants,” he said.

“This is a testament to the cost-effective performance you get with battery-based storage, which benefits both individual plants as well as the larger electric power system.”

To contact the reporter on this story: Bobby Magill at bmagill@bloombergenvironment.com