The EPA won’t change direction under Andrew Wheeler’s watch, but it will talk about issues in a different way, the new acting administrator told Bloomberg Environment in an exclusive interview.

“President Trump, when he called me to take on this role, he asked me to clean up the water, clean up the air, and provide regulatory relief,” Wheeler said July 16 prior to a visit at Canonsburg, Pa.-based machine parts manufacturer AccuTrex Products, Inc. “And I think you can do all of that at the same time.”

The trip was one of Wheeler’s first after replacing Scott Pruitt, the former Environmental Protection Agency administrator who resigned amid multiple ethics scandals.

While Wheeler said that he wanted to follow through on priorities that Pruitt laid down, including faster enforcement and permitting, he will also focus on agency communication to the public.

One of his key policy goals will be to increase risk communication, which he said is one of the main criticisms of the agency. Calling the Flint, Mich., water crisis, a “poster child” for why better communication is necessary, Wheeler said he will gather working groups in the next several weeks to encourage the agency to speak with “one voice” on health concerns. 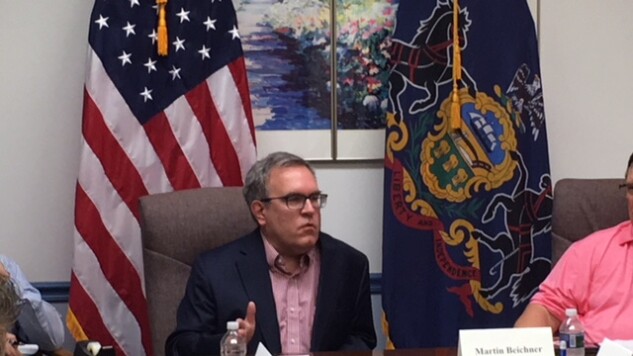 Wheeler repeated those comments to leaders of the Washington County, Pa., business community. He also said the agency will focus on drastically reducing the amount of time it takes to research potential samples so that it can more quickly process enforcement actions and warn individuals if they are exposed to health risks.

Like Pruitt, Wheeler said that many of the agency’s rules are 30 years old and need to be updated to better monitor current evolving business practices. That includes both making sure people are safe, but also not getting in the way of industry, he said.

“I don’t expect in the short time I’m at the agency that I’ll solve all these problems, but I want to get us on a glide path,” he said.

Wheeler said another priority would include further research into which lead pipes need to be replaced to protect drinking water from lead contamination. The EPA has been working for years on updating its standards on lead in drinking water, formally known as the Lead and Copper Rule.

He also put to bed questions about reopening the greenhouse gas endangerment finding, which underpins all of the agency’s climate change regulations. He said that since the science hasn’t changed, he sees no reason to revisit the finding.