California’s Salton Sea is a complicated place that’s not well known outside the Golden State, but its imperiled status has helped clog progress negotiating drought protection measures with water users along the Colorado River.

The Colorado River basin supplies water to seven states and Mexico, but a 19-year-long drought has taken its toll, which forced the U.S. Bureau of Reclamation to order the players to agree on drought management plans by Jan. 31, 2019.

Most states complied, but legislation passed in Arizona didn’t technically meet the deadline and two California users had conditions, including securing millions from the Agriculture Department for Salton Sea. That unusual ask is throwing a new wrinkle into the entire process.

Reclamation has now given the governors of each state until between March 4 and March 19 to recommend how the federal agency should move forward to protect reservoirs at lakes Mead and Powell.

“There’s a risk in the basin now,” Reclamation spokeswoman Patti Aaron said. “We just have to move forward.” 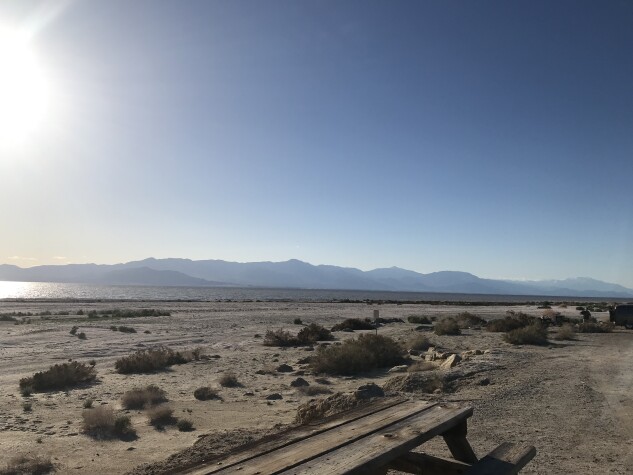 A state camping and picnic area near the Salton Sea in California is seen on Feb. 6, 2019.
Photographer: Emily C. Dooley/Bloomberg Environment

One major hook? The Imperial Irrigation District in Southern California, which is the largest Colorado River user, said it wouldn’t agree to any plans unless about $200 million from the federal farm bill could be found to help ensure that a 10-year restoration plan for the Salton Sea would be fully funded.

Users along the river say negotiations tend to run right up to deadlines, but this demand of another federal agency could be a first. When it comes to Imperial, “that’s up to California how they move forward,” Aaron said.

The Upper Basin states of Colorado, New Mexico, Utah, and Wyoming signed their drought contingency plans in December. In the Lower Basin, only Nevada agreed to the drought plans. Arizona is working to seal its pacts before comments are due to Reclamation, state officials said. It leaves California a bit up in the air.

“All of us functioning together is better than one basin going forward without the other,” James Eklund, Colorado’s representative on Colorado River issues, told Bloomberg Environment Feb. 20.

A Young and Old Sea

The Salton Sea is both young and old. The first lake in the Salton Basin traces back to 700 A.D., when the Colorado River flooded the area. A lake remained until about 300 years ago, with intermittent flooding over the centuries, according to the Salton Sea Authority.

In 1901 an irrigation canal was dug from the river into Imperial Valley for agricultural use.

When silt clogged the waterway, another cut was made. But floodwaters overtook the canal in 1905 and by the time the leak was plugged, the Salton Sea was formed.

In its heyday of the late 1950s and 1960s, the sea was the most popular recreational spot in the state. More than 400 species of birds used the area as part of the Pacific Flyway, a migration route.

But the lake has been primarily fed by agricultural runoff. Less water for growing also means less runoff, which translates into a shrinking coastline, higher salinity levels, fewer fish, fewer birds, and more insects and dust.

Diverting agricultural water to prop up Lake Mead could hurt the sea further.

So Imperial officials asked Agriculture Secretary Sonny Perdue in January for $200 million from the 2018 farm bill to help fund an estimated $383 million 10-year restoration plan the state established in 2017.

The district and Agriculture Department have been talking, but nothing has developed. Sen. Dianne Feinstein (D) has also pressed the agency to release funds but has gotten no response, a spokesman said.

Calls and emails to the Agriculture Department for comment over weeks weren’t been returned.

“The most reckless and costly of all options is the ‘do nothing’ option,” said Salton Sea Authority General Manager and Executive Director Phil Rosentrater, who added that federal agencies own about 40 percent of the land surrounding the water body.

The economic loss—from property values, recreation, health care, and more—was estimated at $70 billion in a 2014 report from the Pacific Institute.

The health effects are also a concern. Winds kick up the exposed lake bed, sending tiny particles of fine dust into the air. Emergency room visits in the area for childhood asthma are twice the national average, Rosentrater said.

The Pacific Institute study said if the sea isn’t properly restored and trends continue, as much as 100 tons of dust could be tossed into the air each day by 2045.

Rosentrater said the farm bill money is “a drop in the bucket compared to what would happen if we don’t invest.”

He also sees the pause in drought planning as a plus.

“I think we have better opportunity than we’ve ever had if the federal government is willing to engage,” Rosentrater said.

— With assistance from Tripp Baltz and Brenna Goth.