Envoys at a United Nations conference adopted a set of steps on fighting climate change meant to guide efforts to rein in greenhouse gas pollution worldwide.

The diplomats drawn from energy and environment ministries in almost 200 countries backed rules to implement the three-year-old Paris Agreement, which called for drastic reductions in the use of fossil fuels by the middle of the century. The decision covered technical details of the Paris deal, including everything from a $100 billion pledge to channel aid to developing nations to how to account for emissions cuts.

The deal leaves intact the global fight against climate change. The U.S. participated heavily in the talks, winning a concession from China on accounting for emissions, even though President Donald Trump has vowed to scrap the accord. While the rulebook serves as a foundation for future action, many businesses and environmental groups said it lacked detail needed to spur the immediate action needed.

“We’re not going to be relieved of serious impacts of climate change in the next year,” David Waskow, director of the climate program at the World Resources Institute, said at the meeting in Katowice, Poland. Those damages, he said, may come in the form of “hurricanes in a different place from where they were this year or forest fires or drought.”

In a move meant to spur work on limiting greenhouse gases, the envoys thanked a panel of top climate scientists showing the measures needed to contain global warming to 1.5 degrees Celsius (2.7 degrees Fahrenheit). The U.S. joined with oil exporters including Saudi Arabia in resisting language that appeared to endorse the findings of the report. Island nations saw the report as a call to action.

“It really outlined how really quite quickly and dramatically transformation of society needed to be to reach that target,” said Drew Shindell, a climate scientist at Duke University in North Carolina who was among the co-authors of the report for the UN’s Intergovernmental Panel on Climate Change. 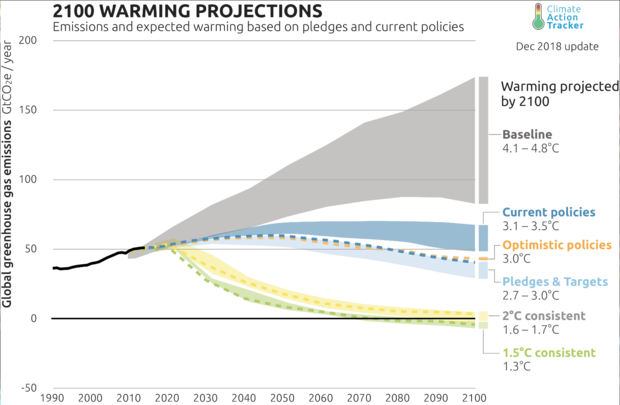 Above is a chart showing possible scenarios for global temperature increases by the end of the century.
Source: Climate Action Tracker

Rising greenhouse gas pollution already has driven up the global temperature about 1 degree Celsius since the start of the industrial revolution, with scientists suggesting that current plans leave the planet on track to warm 3 degrees or more by the end of the century. That would mark the quickest shift in the climate since the last ice age ended about 10,000 years ago, and envoys at the talks expressed alarm that so little is being done.

The text of the agreement in Katowice calls for:

The envoys pulled out of the text much of the language meant to spur the spread of carbon markets, leaving that matter for a future meeting. There were unable to bridge a gap between Brazil and richer nations over how to ensure that nations both buying and selling allowances don’t count pollution cuts embedded in the securities as their own.

“Brazil, thwarted progress by insisting that they should be allowed to cheat the atmosphere—and their trading partners—by double-counting their carbon credits,” said Nathaniel Keohane, vice president of the Environmental Defense Fund. “Such a loophole would undermine the integrity of the carbon market and contradict the basic principle that each ton of emissions reductions should only be counted once.”

Trump’s rebuke for climate science and the talks that led to the deal widened a rift with China over environmental policies. The world’s two biggest polluting nations worked together in guiding the Paris deal to completion three years ago under then-President Barack Obama. In Katowice, China stood with developing countries in demanding industrial nations make more progress meeting their $100 billion aid pledge.

“Some delegations we are seeing backsliding,” Xie Zhenhua, China’s lead envoy to the talks in Katowice, said at a briefing Dec. 13. “There are still quite a number of developed countries who did not start” providing financial and technological support that they had pledged since 2009.

The Paris deal calls for countries to make voluntary cuts to their emissions. Katowice was to deliver a rulebook on accounting for those cuts—and for the funds set to flow from rich nations to poorer ones to help them cope with the impacts of climate change.

“The rules are symbolic,” said Jonathan Pershing, a former U.S. State Department envoy to the talks now working at the nonprofit Hewlett Foundation. “The particulars of them, while important, are somewhat less a focus. Few regions are going to copy the rules. 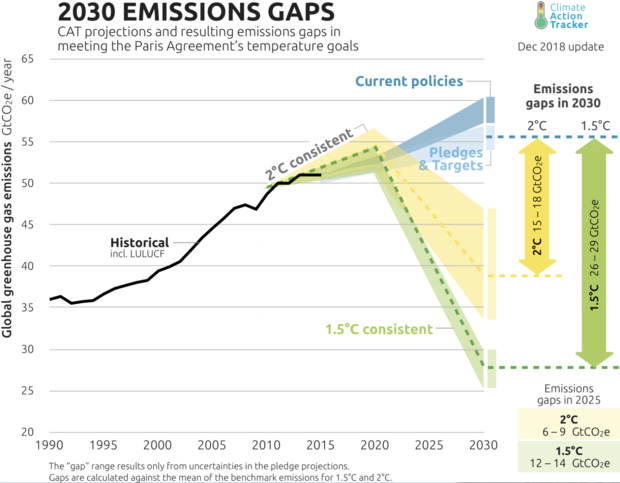 The agreement adopted in Poland reflected tensions between the largest negotiating blocs. Richer nations wanted a more robust system of accounting, while poorer ones wanted any deal to recognize the wildly different capacity countries have in the measuring and reporting process.

“To prevent the worst impacts of climate change, the world needs to hit top gear, and quickly,” Edson Duarte, Brazil’s environment minister, said in a statement after the heart of the package was adopted. “We cannot do that from a standing start.”

Environmentalists and an increasing number of businesses were calling for as much detail as possible, giving them the guidance they need to lower their own pollution and bring in investment for clean energy.

“Climate action makes sense for business which is why we’ve seen multiple industries signing their own ambitious plans,” said Gabrielle Giner, head of environmental sustainability at BT Group Plc. “The desire is there, it is up to policymakers to provide the means for us to enable action.”

(Updates with detail throughout.)

To contact the editors responsible for this story: Reed Landberg at landberg@bloomberg.net Alaric Nightingale