The Holy Fire burns in the Cleveland National Forest as seen across the water from Lake Elsinore, Calif., on Aug. 8, 2018.
Photographer: Robyn Beck/AFP/Getty Images

The record-setting wildfires causing widespread destruction in California are fueling research on the danger of the air pollution they spew—and how far across the country the pollution could spread.

Satellites operated by NASA and the National Oceanic and Atmospheric Administration are capturing images of smoke plumes spreading across the West Coast, much of the Midwest, and in some instances, heading toward the East Coast.

Understanding the insidious effects this smoke has on air quality and public health is an opportunity for researchers, but also a challenge. They told Bloomberg Environment it is difficult to pinpoint the effects as the fires break out in different communities, spreading whichever way the wind takes them.

“Every year you hear the fires are the worst ever,” said Amber Soja, a senior research scientist with the NASA Langley Research Center in Virginia. “These are not idle remarks. It’s not like they are trying to sell cars. The fires are increasing in burned area and severity each year as predicted by climate models.”

The first week of August alone saw the number of large fires jump from 98 to 106 across the West, burning 1.66 million acres in 15 states, according to the Aug. 9 update provided by National Interagency Fire Center. 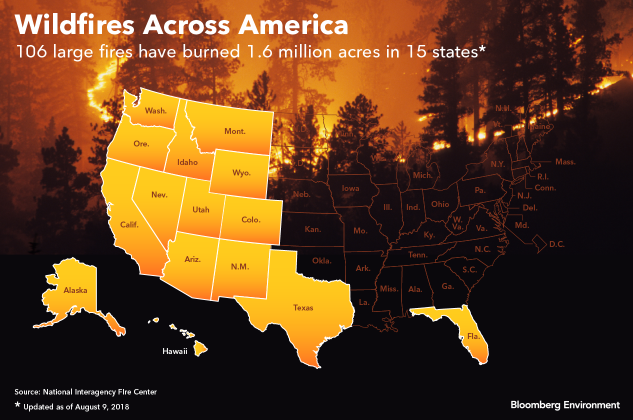 Smoke from burning vegetation and trees contain precursors of ozone, such as nitrogen oxides and volatile organic compounds, as well as fine particulates—or particles 30 times smaller than the width of a single hair—of airborne pollution that are linked to a variety of respiratory and cardiac illnesses. These plumes also contain chemicals released when homes, factories, and vehicles are set ablaze.

Emily Fischer, an assistant professor of atmospheric science at Colorado State University, has been sampling what she calls “rivers of smoke” over Washington, Oregon, California, Idaho, and Utah since late July. Nevada and Utah appear to be to be swimming in smoke, at least that is what it seemed like to Fischer during a particularly bumpy ride aboard a C-130 plane, as it navigated the smoke enveloping Utah.

Each day she and her team have been taking off from Boise in the four-engine cargo plane that is equipped with at least 25 different sensors and detection instruments, most of which work in real time.

“I am not just looking at pollutants the Environmental Protection Agency monitors, but hundreds of other pollutants,” Fischer told Bloomberg Environment.

Scientists are interested in how far the smoke travels, and what effect, if any, it has on the communities over which it travels. They also want to know the chemical makeup of the smoke at the burn site and how its composition changes as it travels further afield.

“It’s difficult to anticipate how far the smoke will travel because we don’t know how high the smoke will be released into the atmosphere,” Fischer said.

Winds generally move faster higher up in the atmosphere, but winds at different altitudes can also go in different directions, Fischer added.

Fischer leads a multiagency, multidisciplinary team of scientists with backing from the National Science Foundation to study the composition of Western wildfires.

Fischer and other scientists do know based on past studies that the Pacific Coast is an exporter of smoke to the Great Plains and the Midwest, and that smoke does have an adverse influence on air quality. But whether that influence translates into public health impacts is a question researchers are studying now.

Steven Brey, a Colorado State University doctoral student in atmospheric science, tried to pin down the spread of smoke plumes by studying smoke data from NOAA’s Hazard Mapping System for June through September in the years 2007 through 2014. He and his team also looked at the average concentrations of fine particulates across the country.

Brey’s study, published in the Atmospheric Chemistry and Physics journal in February, showed that North Dakota, South Dakota, and Minnesota had more smoke plumes overhead than any other states in the lower 48, averaging between eight and 12 days per month between June and September. Specifically, the region with the most smoke plumes overhead was centered over Fargo, N.D., where ground-level monitors suggested that air quality was affected for only a fraction of those days when plumes were seen above.

The plumes from fires, some that originated in the Northwest and Canada, reached as far as the Northeastern states, influencing air quality for about a day for each of the summer months.

Further inland in Colorado, Jeff Pierce, another atmospheric science professor at Colorado State University, is making sense of the air pollution data and trying to piece together public health impacts with Sheryl Magzamen, an associate professor in epidemiology.

Pierce and Magzamen told Bloomberg Environment they don’t know what the long-term effects will be of inhaling smoke and other chemicals released by the wildfire. But previous wildfires led to increased hospitalizations in the past few years.

A study funded by the NASA Applied Science program enabled Magzamen, Pierce, Fischer, and others to uncover a correlation between exposure to fine particulates and an increase in the risk for hospital admission for respiratory problems, such as asthma and pneumonia.

“What we have been seeing are consistent, meaningful relationships between wildfire smoke and adverse respiratory outcomes in summer—a season where these health risks should be low, and in rural communities where there aren’t other major sources of summer fine particulates, such as traffic,” Magzamen said.

Magzamen said researchers need to figure out what happens in the long term, as people are exposed more frequently to wildfire smoke. “We need to change from viewing health effects of wildfires as an infrequent disaster, to thinking of wildfire smoke as a potentially chronic exposure, especially in more rural locations.”