A man walks through flooded streets in Naples, Fla., on Sept. 11, 2017, the morning after Hurricane Irma swept through the area.
Photographer: Spencer Platt/Getty Images

If it seems like 500-year floods happen far more often than every 500 years, there’s a reason for that: The climate has changed. But the way the federal government calculates flood insurance premiums hasn’t.

At least not yet.

FEMA officials say they are less than a year away from unveiling a radically new method of calculating premiums that will bring its government-run insurance program more in line with the actuarial science used by private insurers. The goal is to tailor rates based on the unique risks faced by individual properties.

The change is also intended to stop, or at least slow, the federal insurance program’s financial hemorrhaging and avert the need for a taxpayer bailout.

Years of stronger-than-expected storms dating to Hurricane Katrina in 2005 have caused claims to far outstrip premiums, especially along the Atlantic and Gulf coasts, where fewer than 300 counties account for the entirety of the program’s billion-dollar-plus shortfall, according to data from the Congressional Budget Office.

Powerful lawmakers from both parties are anxious that the revamp will cause premiums in their states to skyrocket and trigger an economic domino effect. Some are vowing to propose legislation before the new premium model is even introduced.

“I have serious doubts that FEMA, due to its previous shortcomings, can accurately measure risk,” (D-N.J.) said. “Think about the rate shock if we allow premiums to double every four years for middle class homeowners who played by the rules and built according to the building codes at the time.”

(R-La.) said rate spikes could trigger a wave of coastal home defaults if, in some cases, monthly premiums will grow to be comparable to monthly mortgage payments.

“You might encourage someone to go to the bank and drop their keys on the desk and say ‘Hey, we’re moving,’” Cassidy told Bloomberg Environment. “I would like there to be protections for the consumer so we don’t destroy the tax base of a community.” 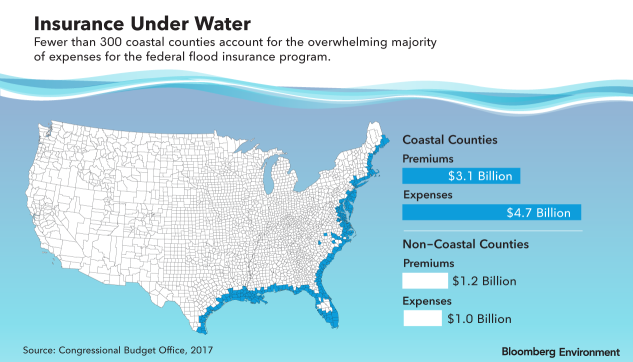 The Federal Emergency Management Agency determines a property’s flood insurance rate using methodology that was developed in the 1970s. It carves up the country into a series of flood zones and uses these zones as the primary factor that determines higher or lower rates.

David I. Maurstad, the top official at FEMA in charge of flood insurance, said this method can create some confusing inequities—especially for people living on the edge of one of these zones.

“Right now, if you’re right on one side of the mandatory purchase line, you have a relatively high premium,” he told Bloomberg Environment. “If you’re on the other side of the street, you have a very different premium.”

FEMA’s modernization initiative, which it’s calling Risk Rating 2.0, will be unveiled in April 2020, with the new rates taking effect the following October. It will use technology to make the federal flood insurance program more fair and, as a result, will encourage more people to purchase policies, something that benefits everyone in the end, Maurstad said.

For example, the agency’s new methods use laser-based elevation maps along with large data sets on historical flood claims and other sources of data.

“Closing the insurance gap is essential to achieving a culture of preparedness,” he said. “Part of our responsibility is to make sure we have an equitable, fair premium structure that reflects true risk.”

‘Shocks to the System’

This new rating methodology will cut premiums for some homeowners, especially those living on the outer edge of a flood zone, Holly Widen, a flood product manager with the data firm RMS, said. Her company provides flood risk models to cities, private insurers, and investors.

But, she said, homeowners closer to the water, and especially those whose homes have flooded in the past, could see big increases because, for the first time, FEMA plans to factor in a property’s prior flood claims into its new rating engine.

Many policy makers have said that the key to saving the federal flood insurance program, or at least making it more financially sustainable, is tackling these so-called “repetitive loss properties.”

But it will be nearly impossible to do this without inflicting some economic trauma on communities that contain lots of repetitive loss properties.

Widen’s colleague at RMS, government affairs director Matthew Nielsen, described this as “resetting the baseline,” which will inevitably cause “some shocks to the system.”

Right now, there’s a congressionally imposed cap on how quickly flood-insurance premiums can rise. A homeowner’s premium can’t go up by more than 18% on a year-over-year basis.

Assuming maximum annual increases, however, that means a homeowner’s premiums could double once every four years. Cassidy said he’d like Congress to reduce this annual premium cap to as low as 8.25%.

“You have to have some guaranteed stability,” he said.

There’s some recent precedent that lends credence to Cassidy’s worries.

Congress passed a major overhaul of the federal flood insurance program in 2012, but then had to go back two years later and pass another bill that delayed some of the unintended premium spikes triggered by the earlier legislation.

That’s why Cassidy wants Congress to get involved early on in the process and pass legislation before FEMA rolls out Risk Rating 2.0.

“Original versions of any program are sometimes fraught with error,” Cassidy said. “I would rather address it on the front end.”

(R-Fla.) and (D-R.I.) also told Bloomberg Environment they want premiums kept affordable, with Rubio saying that Risk Rating 2.0 will “almost certainly be a mixed bag” for his state.

All of these coastal lawmakers acknowledged that the current flood-zone-based system that FEMA uses is imperfect and probably unsustainable.

Cassidy said he doesn’t think the program should remain unchanged and supports the agency updating the technology it uses to create elevation maps.

But there are also risks of Capitol Hill micromanaging the Risk Rating 2.0 project. Nielsen said any congressional tinkering with the project could make it harder for the agency to get its insurance program back on stable financial footing.

For example, he said, lowering the premium increase cap—as Cassidy wants—would make it harder for private insurance companies to enter the flood market, because they wouldn’t be able to compete with FEMA’s artificially lowered rates.

That would ultimately hurt consumers, because private companies could be more flexible and creative in crafting policies than a monolithic, federally run insurer, Nielsen said.

Maurstad said FEMA is primarily focused on perfecting the data engine it will use to calculate its new rates, in advance of Risk Rating 2.0’s big rollout next year.

“I’m not so naive to think that there won’t be congressional attention paid to this,” he said. “But we will deal with that.”