PG&E Corp. pleaded guilty to involuntary manslaughter,admitting in a California courtroom that it killed 84 people after its equipment ignited the deadliest wildfire in state history.
Photographer: David Paul Morris/Bloomberg

pleaded guilty to involuntary manslaughter, admitting in a California courtroom that the bankrupt utility killed 84 people after its equipment ignited the deadliest wildfire in state history.

The company entered its plea Tuesday before Superior Court Judge in Chico, about 170 miles (274 kilometers) north of San Francisco and less than 15 miles from Paradise and other smaller towns where the victims died and thousands of homes were destroyed in the Camp Fire on Nov. 8, 2018. 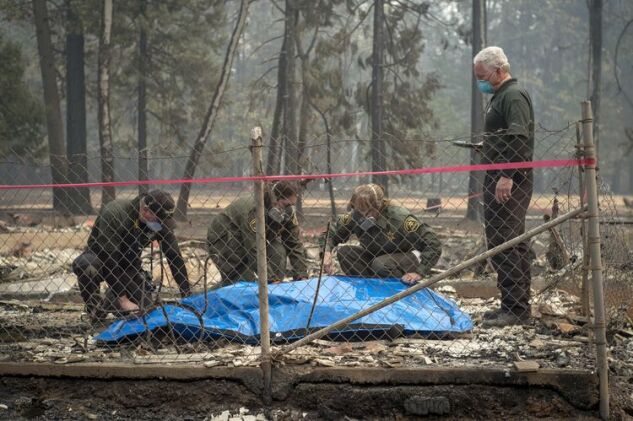 Police officers prepare to remove the remains of a victim of the Camp Fire in Magalia, Calif. on Nov. 15, 2018.
Photographer: David Paul Morris/Bloomberg

In court on Tuesday, Chief Executive Officer Bill Johnson admitted guilt on behalf of the utility, which accepted responsibility for the deadliest corporate crime in U.S. history. Johnson repeated the guilty plea 84 times, acknowledging PG&E’s culpability for each victim as their pictures were shown. The utility also pleaded guilty to an 85th count of unlawfully causing a fire.

“I’m here today on behalf of the 23,000 men and women of PG&E to take responsibility for the fire that killed the people whose pictures we just saw as we went through the counts,” Johnson said.

While words alone won’t reduce the “magnitude of that devastation” caused by the Camp Fire, “we hope that by pleading guilty, by accepting accountability, by compensating the victims, by supporting rebuilding, and making significant lasting changes to the way we operate, we can honor those who were lost and help this community move forward,” Johnson said.

Deems accepted the plea deal PG&E arrived at with Butte County District Attorney Michael Ramsey, but won’t impose a sentence until hearing from people who lost loved ones and homes in the fire. That testimony begins Wednesday and may last into Thursday and Friday.

The sentencing is a legal formality. PG&E agreed with Ramsey to pay a $4 million fine and will report to an outside monitor who was appointed by a federal judge overseeing PG&E’s criminal probation for safety violations stemming from a 2010 fatal gas-line explosion.

Ramsey told the court that Johnson deserves credit for looking directly at each of the victims’ photographs as he accepted the guilty pleas.

“Mr. Johnson stood before the court and did not put his head down, did not just mumble ‘guilty,’” Ramsey told the judge. “This, if we are to listen to PG&E’s words, is an object lesson.”

(Updates with CEO’s admission of guilt on behalf of company in third paragraph.)