The federal government and several states are in the process of regulating PFAS chemicals in food packaging, and there is consumer litigation as well, write Bryan Cave partner Thomas Lee, associate Elyse Voyen, and attorney John Kindschuh. They discuss the issue and how businesses should prepare.

Have you ever wondered why your French fry box doesn’t disintegrate, or your burger wrapper doesn’t turn into a soggy mess?

The answer is a family of several thousand chemicals called per- and polyfluoroalkyl substances (PFAS). Certain PFAS compounds are incredibly effective at repelling water and oils (think fat and grease) and have been used in a wide range of consumer products including food packaging.

However, based on concerns about the impacts that certain PFAS compounds can have on human health and the environment, both the federal government and states have begun regulating the presence of these compounds in food packaging. For businesses that manufacture or use food packaging, it is important to understand the current regulatory environment.

The bi-partisan Keep Food Containers Safe from PFAS Act of 2021 was introduced in both the House and Senate in November 2021, and has been referred to committees in both chambers.

The relatively short bill would amend Section 301 of the Federal Food, Drug, and Cosmetic Act (21 U.S.C. 331) to prohibit the “introduction or delivery for introduction into interstate commerce of food packaging containing intentionally added PFAS.”

In the bill, PFAS is broadly defined to include all PFAS compounds with a fully fluorinated carbon atom, and not just the PFAS compounds that have been associated with human health effects and environmental effects. If enacted, this bill would essentially prohibit the use of PFAS in any new food packaging. The bill has not made it out of committee in either house, so it is unclear when, if at all, it will become law.

Additionally, the Food and Drug Administration issued a letter on Aug. 5, 2021,
to manufacturers and distributors of fluorinated polyethylene food contact articles “as a reminder that only certain fluorinated polyethylene containers are authorized for food contact use.” These containers—also referred to as high-density polyethylene (HDPE) containers—have been identified by the Environmental Protection Agency as a source of PFAS contamination in certain pesticides and are reportedly used during food product manufacturing.

As a result, there may be increased federal regulation of the packaging and containers used during food manufacturing, as well as consumer food packaging. 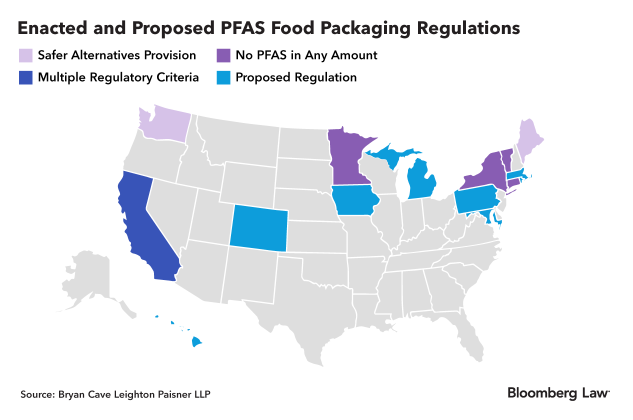 What Does This Mean for Businesses?

Businesses that manufacture or use food packaging can expect increased regulatory scrutiny, media attention, and possibly lawsuits over the next several years.

PFAS in food packaging is a hot topic for NGOs, industry groups, and impacted businesses, and is getting significant media attention.

For example, on March 24, 2022, Consumer Reports came out with their “Dangerous PFAS Chemicals Are in Your Food Packaging” report which concluded that PFAS chemicals were present in several types of packaging which they tested, including:

The report identified fast-food restaurants and grocery store chains as some of the largest sources of the affected food packaging.

Plaintiffs’ attorneys have also picked up the scent. Since March 28, 2022, plaintiffs have filed three class actions in the Northern and Southern Districts of Illinois against McDonald’s alleging that the restaurant violated its commitment to customer safety by allowing PFAS to be utilized in its food packaging.

Then, on April 11, 2022, several plaintiffs filed a class action in the Northern District of California for false advertising and fraud against Burger King alleging that the Whopper is “unfit for human consumption” because of PFAS substances contained in the food packaging.

Notably, within the past two weeks, both Chick-fil-A and Restaurant Brands International —which owns Burger King, Tim Hortons, and Popeyes —announced that they will eliminate PFAS in food packaging within the next several years.

While the specifics of future state and federal regulations are still uncertain in most of the country, PFAS in food packaging are likely to be banned either by direct regulation or regulation-by-litigation over the next few years. Accordingly, now is a good time for impacted businesses to evaluate their interaction with this chemistry.

Thomas Lee is a partner in Bryan Cave Leighton Paisner LLPs Energy, Environment and Infrastructure Practice group, and is the leader of the firm’s PFAS practice. He is a trusted adviser to clients on a range of environmental topics, and regularly works with clients in a variety of industries including real estate investment and development.

John Kindschuh is a member of Bryan Cave’s Energy, Environmental and Infrastructure Practice group. He concentrates his practice in the field of environmental law, including regulatory compliance, analyzing emerging contaminants, and engaging in transactional counseling.

Elyse Voyen is a member of Bryan Cave’s Energy, Environment and Infrastructure Practice group. She handles a wide range of matters across all major environmental and energy law areas, including litigation, regulatory, transactional matters, enforcement actions, brownfield redevelopment, and compliance counseling. She is also a member of the PFAS team.