His son is 19 years old now. The facility, however, is still undergoing relicensing.

“For me, that’s a mental image of just how long it takes to go through this process,” Thoma, a director of power generation at PG&E, which runs one of the largest hydro systems in the country, told Bloomberg Environment.

Delays like this are common, particularly in California, which conducts its own environmental review in addition to those required under the federal National Environmental Policy Act for hydropower relicensing. Those delays are deterring investment in new hydropower projects and even making some companies decide against renewing their licenses at all, industry groups said.

And federal help isn’t coming quickly. House and Senate bills aiming to speed up hydropower licensing and relicensing are unlikely to become law before the end of this Congress, meaning they’d have to start anew next year. 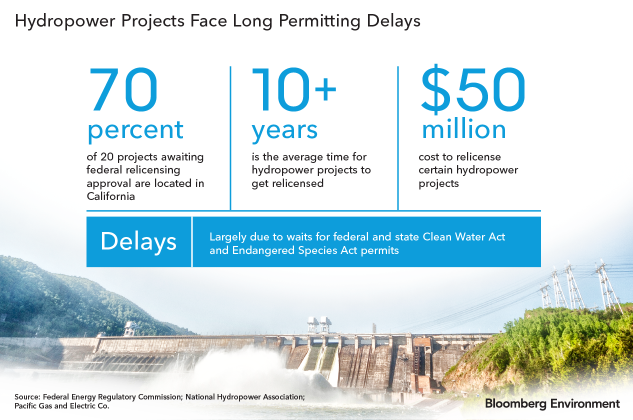 Relicensing Taking Over a Decade

The cost of relicensing a hydropower plant can exceed $50 million, Thoma said.

Twenty hydropower projects are in the process of getting water quality and Endangered Species Act permits—and six of the projects are facing delays of 10 years or more, according to Federal Energy Regulatory Commission data provided to Bloomberg Environment. Hydropower projects, which are licensed by FERC, use water to spin turbines connected to generators to create electricity on dams.

The increased costs and delays are due to multiple factors, including an outdated licensing approval process requiring numerous federal and state agency permits and aging infrastructure, the hydropower industry said. Many existing hydropower facilities are 50 years old and, some have even held centennial celebrations.

FERC oversees licensing of 1,600 nonfederal hydropower projects. Owners of hydropower projects have to provide FERC a notice of intent to seek a new license five years before their 30-, 40-, or 50-year license expires. While undergoing the relicensing process, companies’ existing FERC licenses remain in effect.

The main contributor to the delays is that different permits administered by an array of federal agencies are required depending on the project’s location, including those under the Clean Water Act and Endangered Species Act. Permit reviews may involve agencies such as FERC, the Bureau of Land Management, the U.S. Forest Service, the National Marine Fisheries Service, and the U.S Fish and Wildlife Service, as well as state level water agencies, such as the California State Water Resources Control Board.

Hydropower currently makes up about 7 percent of energy generation in the U.S., and is the largest source of renewable energy. The Energy Department projected in 2016 that 4.8 gigawatts of additional hydropower projects could potentially be built on existing nonelectricity generating dams.

Legislation in the Lurch

The House and Senate both have bills to speed up the licensing of hydropower projects by giving FERC the authority to set deadlines for review done by other federal agencies.

However, the House passed H.R. 3043 nearly a year ago, and Senate’s version is wrapped up in the broad energy bill—S. 1460. The Senate is unlikely to finish during the lame duck session after midterms due to other higher priority bills, meaning the measures would have to be reintroduced in the 116th Congress, which begins in 2019.

“We’re hopeful, but if that doesn’t happen, then we will pursue the agenda in the next Congress,” he said.

President Donald Trump has already signed into law the America’s Water Infrastructure Act of 2018 (S. 3021), which requires FERC to establish an expedited process for issuing licenses for hydropower facilities at existing, nonpowered dams.

The future of hydropower investments in the U.S. is a little murky given the long relicensing delays.

“The delays certainly discourage investment in hydropower because of the uncertainty involved in the license process,” Thoma said. “Uncertainty about how long it will take and what conditions will be imposed.”

For PG&E alone, relicensing routinely exceeds $20 million per project and can exceed $50 million for certain other facilities. Delays increase costs, which are ultimately borne by customers, Thoma said.

Compared to licensing for other energy facilities, the process of hydropower takes the longest. For instance, natural gas projects can be built in several years.

“It puts you at a much more difficult competitive disadvantage when a wind project or natural gas project can built so much faster,” Leahey said.

A combined-cycle natural gas plant costs approximately $1 million to $2 million, and can be built in several years, whereas, some hydropower studies alone can cost many times that amount, Ramya Swaminathan, CEO of Rye Development LLC, a large hydropower plant developer, told Congress in a March 2017 hearing on hydropower.

Of the 20 delayed relicensing projects FERC is tracking, 14 are located in California, which requires companies to undergo a separate review—the California Environmental Quality Act—after FERC has completed its NEPA analysis.

The state office in charge of certifications has acknowledged the delays caused by that additional scrutiny and is working to speed up reviews.

The California State Water Resources Control Board, which issues the state water quality permits and oversees the CEQA process for many of the permits, has faced years of hydropower review backlogs primarily due to insufficient staff resources. The board has increased staff in its water quality certification branch program from less than five before 2010 to 15 right now, Erin Ragazzi, the board’s assistant deputy director of the water quality certification branch, told Bloomberg Environment.

“We rediverted staff from other priority programs. We still aren’t in a position where we’re adequately staffed, but the backlog is the focus,” she said.

The board updated time frames for projects awaiting water permits and revises those whenever there is a delay on the state’s part in an effort to be more transparent.

The operators of existing hydropower projects can’t make these types of environmental improvements or recreational upgrades until the relicensing process is approved by FERC.

“It draws out whatever impacts this hydropower project has on the river. Blocking fish passage. It could be unnatural water levels,” Amy Kober, the national communications director for American Rivers, a national river conservation group told Bloomberg Environment.