A protected area of the Rawa Singkil Wildlife Reserve in Indonesia is burned March 3, 2018, for a new palm oil plantation.
Photographer: Januar/AFP/Getty Images

U.S. soybean companies could be the big winners if an upcoming European Union rule on sustainable biofuels goes through.

The rule, which the European Commission—the EU’s executive arm—is required to propose by Feb. 1, would define which feedstocks used in biofuel production are sustainable in terms of forest clearance and other land-use changes.

Feedstocks identified as causing high levels of indirect land-use change (ILUC) will be capped and wouldn’t count toward EU biofuels targets after 2030.

The main feedstock in the line of fire is palm oil from Indonesia or Malaysia, where it is linked to widespread clearance of tropical forests to make way for plantations.

It is “pretty sure” that palm oil producers will lose out under the rule, “basically because of Indonesia, where there is tremendous land-use change,” Gernot Klepper, senior researcher and head of environment and natural resources research at Germany’s Kiel Institute for the World Economy, told Bloomberg Environment.

When the commission makes its sustainability judgment, it is likely to find the U.S. “one of the least risky countries in the world,” said Stephanie Searle, fuel program lead at the International Council on Clean Transportation in Washington.

The requirement for an EU ILUC rule was triggered by a law on renewable energy, finalized last December, stipulating that the EU must meet at least 32 percent of its energy needs from renewable sources by 2030.

The law also specifies that by 2030, 14 percent of transportation fuel consumed in the EU must come from renewable sources, including liquid biofuels and biogas.

To prevent environmental damage, the law also requires specific standards for low- and high-ILUC biofuel feedstocks, with the amount of biofuel from high-ILUC feedstocks capped at 2019 levels and then phased out through 2030. 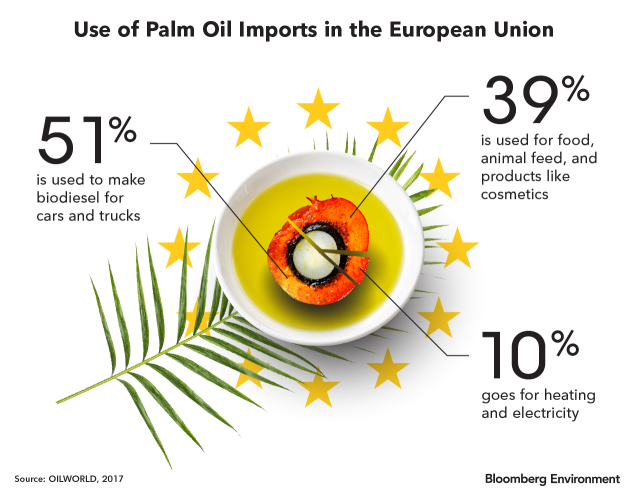 Palm oil is the most harmful type of crop biofuel, mainly due to deforestation and peatland drainage, with triple the emissions of fossil diesel, according to a summary from the nongovernmental organization Transport & Environment in Brussels.

“We are already decreasing the use of palm oil, progressively substituting it with waste residues and used cooking oil, with the aim of phasing it out completely,” said a spokesman in Rome for oil and gas company Eni SpA.

“That said, the availability of alternative feedstock is limited for the time being, which means that fully phasing out palm oil will only be possible once alternative feedstock become easily available. That is why the EU rules should not be equivalent to a “hidden ban” by being very difficult to implement or limited to very particular cases,” he added in a Jan. 22 email.

When the commission proposes its rule, it could specify certain crops—such as palm oil—but allow exemptions where appropriate, or it could “focus on the areas that have a high risk of land-use change,” Klepper said.

For example, the commission could designate Indonesia and Malaysia as high-risk indirect land-use change countries, whereas Colombia, which also exports palm oil to the EU and where palm oil cultivation doesn’t cause major forest clearance, could be designated low risk, he said.

Under such an approach, soybean producers in Argentina and Brazil also could lose out because of forest clearance concerns, though Brazil “has its own huge market for biodiesel” and would be less affected, Klepper said.

However the EU defines the rule, it is sure to cause some dissatisfaction as significant trade is at stake.

Just over half (51 percent), or 3.9 million metric tons, of crude palm oil imported into the EU in 2017, largely from Malaysia and Indonesia, was processed into biodiesel, according to the European vegetable oil and proteinmeal industry federation (FEDIOL) in Brussels.

Palm oil makes up about a third of the content of biodiesel in the EU, with the rest from rapeseed oil, soybean oil, and sunflower oil.

Malaysia and Indonesia have pushed back against possible limitations on EU palm oil imports. They declined to take part in a November 2018 workshop with EU representatives and said an EU indirect land-use change rule that effectively prohibits palm oil in biofuel could violate World Trade Organization rules and trigger retaliation.

Conie Liew Yit Siam, an official at the Embassy of Malaysia in Brussels, said she was unable to comment.

The rule could have limited initial effects, because EU producers will continue to process palm oil for food and chemical use, according to Nathalie Lecocq, director general of FEDIOL in Brussels.

The indirect land-use change rule “could lead to an increase of palm oil use in biodiesel in 2019, because this will be the reference year for its capping,” Lecocq said. But the “consequences are difficult to anticipate to the full,” she added.

Minnetonka, Minn.-based Cargill Inc. said in a statement to Bloomberg Environment that it “supports biofuels production and use that proves to be environmentally beneficial, and which helps reduce greenhouse gas emissions and contributes to net carbon neutrality.

“We participate in business opportunities across a board portfolio of fuel products from renewable resources around the world and remain committed to assessing the most sustainable and efficient feedstocks.”

The likely boost for U.S. soybeans from the biofuels rule also should be seen in the context of the U.S. “pushing soy to the European market under the Trump administration,” Klepper said.

“As the global demand for transportation fuels continues to rise, the consistent quality and sustainability of U.S. soy can play an important role,” said Jim Sutter, CEO of the U.S. Soybean Export Council. “Serving our global customers is our priority and U.S. Soy farmers will continue to ensure they are producing crops as efficiently as possible to feed and transport a growing world.”

U.S. soybean exports to China—the world’s largest buyer—plummeted in 2018 when the two countries began to levy tariffs on one another as a consequence of President Donald Trump’s trade policy. 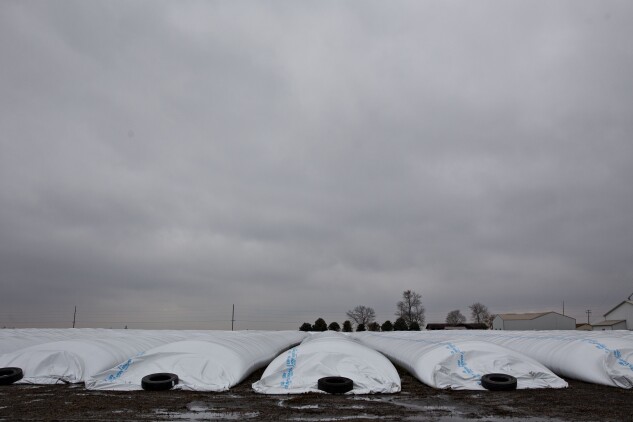 Caught in the middle of the U.S.-China trade war, bags of soybeans sit Nov. 9, 2018 at a farm in Lovington, Ill.
Photographer: Daniel Acker/Bloomberg via Getty Images

Trump also threatened tariffs on the EU. To head off the threat, European Commission President Jean-Claude Juncker went to the U.S. in July 2018 and promised to promote increased EU purchases of U.S. soybeans.

The European Commission has started a process to recognize U.S. soybeans as a sustainable feedstock for EU biofuels. In December 2018, it published a draft decision acknowledging that the U.S. Soybean Sustainability Assurance Protocol met EU biofuels sustainability criteria.

Recognition of that program applies under the current rules, which will be replaced by the new renewable energy law and associated indirect land-use change rules.

From the point of view of limiting deforestation related to palm oil, the EU ILUC rule might make little practical difference, according to Anja Lillegraven, Indonesia team leader at the Rainforest Foundation Norway.

Global demand for palm oil is growing and the EU rule might “reduce the increase in demand but it will not decrease the demand,” she said.

To contact the reporter on this story: Stephen Gardner in Brussels at correspondents@bloomberglaw.com