A gas flare is seen at an oil well site on July 26, 2013 outside Williston, North Dakota.
Photographer: Andrew Burton/Getty Images

The EPA knows its plans to relax Obama-era oil and gas methane limits could harm public health due to related air pollution increases, but it hasn’t calculated the exact toll on health.

The Environmental Protection Agency for several years has chosen not to monetize public health effects in its oil and gas rules, including during the Obama administration. But the stakes are higher now, environmentalists and health researchers said, because the Trump EPA proposal could allow for the release of thousands more tons of volatile organic compounds, or VOCs—a precursor for the lung irritant ozone—and hazardous air pollutants over the next decade.

Those public health costs “could be the thing that determines whether the rule is actually justified or not,” Avi Zevin, an attorney with the Institute for Policy Integrity, told Bloomberg Environment.

“They should be doing a more complete consideration of what those costs of the foregone health benefits are, what they would mean, and how that factors into their decisionmaking,” Zevin said.

The agency quantified the cost of the extra methane emissions in its regulatory impact analysis. But the EPA said data limitations prevented it from doing the same for extra emissions of VOCs and hazardous air pollutants, even though it acknowledged those emissions could degrade air quality and harm human health. 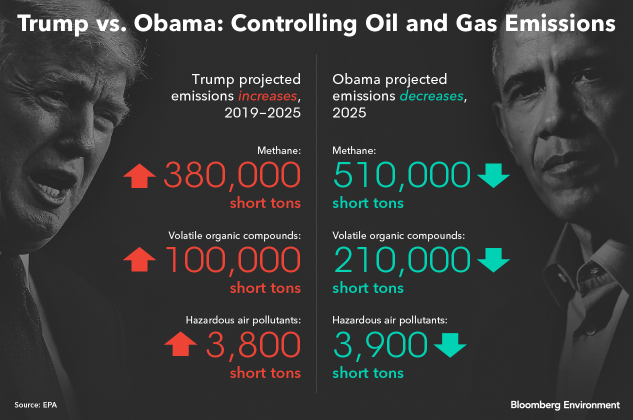 The estimated methane increases are roughly 1.4 million metric tons of carbon dioxide equivalent a year, which is about 0.02 percent of total U.S. greenhouse gas emissions tallied by the EPA in its annual inventory, Kathleen Sgamma, president of the Western Energy Alliance, told Bloomberg Environment.

The estimated bump in VOC emissions is similarly insignificant when compared to total U.S. emissions, she added.

Sgamma said the EPA’s analyses also don’t account for how the regulation might work in practice. She touted a provision in the Trump proposal that allows companies to apply to use new technologies to detect and repair leaks. The Obama administration’s rule, by contrast, locked companies into a specific method and timeline of conducting inspections, she argued.

“The net effect of this rule could be more emissions reductions,” Sgamma said of the new proposal. “Whenever we apply new technology, we can do it faster, quicker, cheaper, more efficiently, and deliver greater environmental benefit.”

The Trump EPA isn’t the first to decline to monetize the public health effects of VOC and hazardous air pollutants. The Obama administration, in its 2016 regulation, also didn’t quantify these impacts, similarly citing data limitations.

But environmentalists argue in that case, it was extra benefits the EPA was failing to quantify. The agency had already justified the benefits of the methane reductions outweighed the costs of compliance.

“It didn’t matter from that context whether they had done a more granular attempt to estimate the benefits,” Zevin said.

The Trump administration, by contrast, is already limiting how it calculates the climate benefits of reducing methane. Ignoring a whole category of potential public health damages carries even more weight, he said.

The EPA is also operating in a world where the science has continuously improved, researchers said.

To claim data limitations or uncertainty as an excuse not to do the calculations is “particularly more egregious now because we have better data and a long track record of doing this stuff in public journals,” John Loomis, a professor in Colorado State University’s Department of Agriculture and Resource Economics, told Bloomberg Environment.

Loomis and a colleague published a study in 2017 quantifying the environmental costs and benefits of fracking in 14 states.

Uncertainties do pose challenges in the science, particularly as it relates to how much pollution is coming from the sector, researchers said.

For example, emissions from oil and gas production vary depending on where the drilling operations are located, when the emissions are occurring, and what the weather is like, Nicholas Muller, an associate professor of economics, engineering, and public policy at Carnegie Mellon University, told Bloomberg Environment.

Emissions from drilling operations closer to metropolitan areas, with the risk of exposing more people, cost more than those from operations in remote areas, Muller added.

But as science improves, researchers are finding the impacts of air pollutants to be even more damaging.

EPA’s own scientists in research published July in Environmental Science & Technology journal estimated pollution from the sector could cause nearly 2,000 premature deaths, 1,000 respiratory or cardiovascular-related hospital visits, 3,600 emergency room visits, and more than 1million cases of worsened asthma or acute respiratory symptoms in 2025. In high-production states such as Oklahoma, Colorado, Louisiana, Pennsylvania, Ohio, and Texas, the effects would be even more acute.

Curtright and several colleagues in 2013 estimated the air pollutant emissions from shale gas extraction in Pennsylvania and quantified the monetary damages of their public health impacts.

The recent research from EPA scientists appears to improve a model Curtright and her colleagues used, allowing the July study to pinpoint even more geographically specific impacts, she added.

Curtright said if the agency wanted to be conservative in dealing with uncertainties, it could include a full range of possible impacts.

But environmentalists and some researchers suggest the EPA may not want to conduct the full analysis because its results would undercut its attempts to undo emissions rules.

“If you already know the answer, the last thing you want is to have an analysis out there that contradicts that,” Loomis said.