San Francisco’s famous open-sided cable cars are giving way to buses, schools are closed, and firefighters are handing out face masks as smoke from the deadly Camp Fire blankets the region in pollution 10 times worse than that in Beijing.

The plumes of smoke from the fire, which has burned 141,000 acres in Northern California, get the most attention, but the Camp Fire is leaving other environmental hazards in its wake: toxic ash from burning homes, polluted water, and burning Superfund sites.

The fire, which began Nov. 8, isn’t even the biggest this year, but its location and timing are making it more of a pollution problem.

The region won’t likely see a break from the smoke until at least Thanksgiving, when a storm could come through dropping rain on the flames and mixing up the air so smoke can escape, said Eric Kurth, a meteorologist with the National Weather Service in Sacramento.

“The smoke is pretty much trapped here until we get a significant storm event,” Kurth told Bloomberg Environment Nov. 15.

Here are the top pollution problems California faces as it battles the blaze.

Fires typically occur in less-populated rural places when summer breezes can push the smoke out to the ocean, said William Stewart, a forestry specialist at University of California, Berkeley. But smoke from the Camp Fire is blocking the sun and colder temperatures are trapping it lower in the atmosphere.

“I’ve never seen this in 30 years. It’s totally unique,” Stewart told Bloomberg Environment. The smoke “just has nowhere to go. This is about as bad a smoke condition as one can imagine.”

That trapped smoke, which includes carbon monoxide, carbon dioxide, and dangerous particles, drove the region’s air quality well beyond the notoriously polluted Beijing. Air quality warnings have been issued through at least Nov. 20. 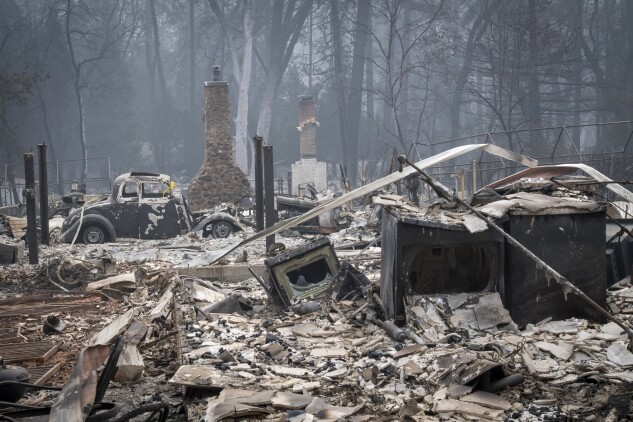 Just as dangerous as that air pollution can be all the ash from burned homes and buildings.

“These chemicals have known adverse health effects and some even cause cancer,” Karen Riveles, a staff toxicologist in the office, told Bloomberg Environment. “We definitely recommend avoiding exposure as much as possible.”

“Forest ash—that’s bad, but when you get into structure ash, it’s worse,” she said. “It’s our household contents that are making the air toxic.”

The Camp Fire had destroyed nearly 12,000 residential, commercial, and other buildings as of Nov. 15. Those areas are now “kind of toxic waste dumps,” Stewart said.

Out of the Air, Into the Water

The rains that will tamp down the fire and smoke could wash ash, sediment, and other contaminants into waterways.

That means water suppliers could see their treatment costs go up or be forced to seek other sources, Fernando Rosario-Ortiz, an associate professor in the environmental engineering program at University of Colorado at Boulder, told Bloomberg Environment.

The water, clouded by sediments and particles, could violate drinking water standards. 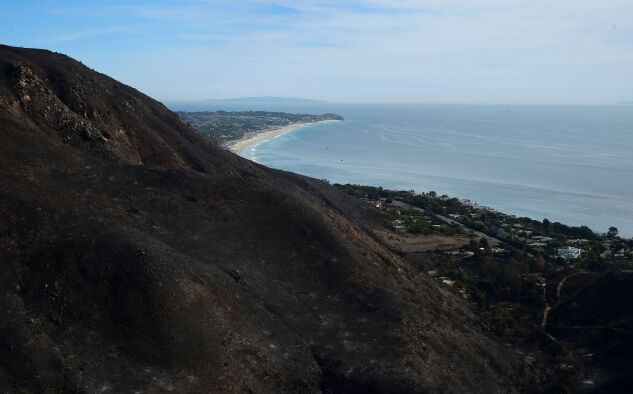 Blackened and charred hills from the Woolsey Fire which made it all the way to the Pacific Ocean, destroying houses along its way through canyons to coastal Malibu, Calif., on Nov. 15, 2018.
Photographer: Frederic J. Brown/AFP/Getty Images

Another danger comes from the Woolsey Fire in the southern part of the state, which has burned about 90,000 acres 30 miles outside Los Angeles. There the flames streaked across the Santa Susana Field Laboratory in Simi Valley.

Once used as a NASA rocket engine testing and nuclear research facility, the state is overseeing soil and groundwater cleanup efforts.

A state, local, and federal response team has taken radiation, air, and soil samples on the site and will continue to do.

“All the measurements and analyses indicate no radiation or hazardous materials were released from the fire at the [site], and no risk to the public other than the risks normally posed by wildfires and wildfire smoke,” the state Department of Toxic Substances Control said in a statement.