Bees are facing an uphill battle these days: Shrinking habitats, invasive mites, Colony Collapse Disorder. Now an insecticide that has become vital to farming—much like the bee itself—is being blamed for the decline in bee populations.

Neonicotinoids are a class of insecticides developed in the 1990s and chemically related to nicotine. They’re designed to attack the central nervous system of insects, which means even sub-lethal doses of these chemicals may cause problems for bees.

In the final episode of our podcast series, Business of Bees, hosts Adam Allington, Tiffany Stecker, and David Schultz look into these claims. They find that neonicotinoids were praised for their low-toxicity to beneficial insects—including bees. But recent studies show that nectars and pollen contaminated with the insecticide may be harming bees much more than we previously thought.

“The lethal dose for a honeybee is only about three or four billionths of a gram. So it’s really hard to get your head around this,” said Dave Goulson, a biology professor studying bumblebees at the University of Sussex in the U.K. “To put that another way, one teaspoon of a neonicotinoid is enough to deliver a lethal dose to one and a quarter billion honeybees. And we’re applying thousands of kilos of this stuff to the landscape all the time.”

Researchers have also found that these neurotoxic pesticides may be impairing bees’ ability to navigate or make their way back to their hives. 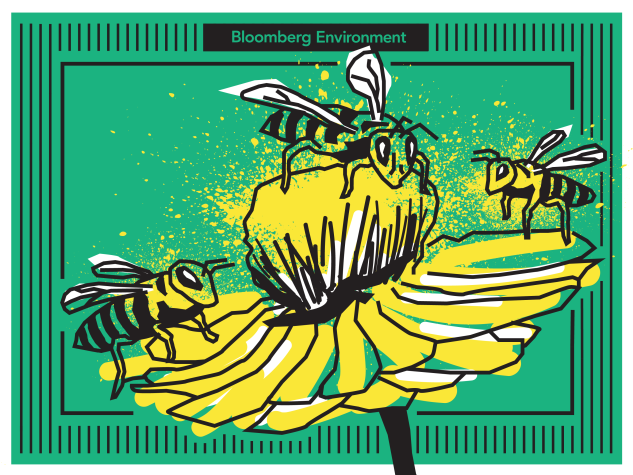 The majority of neonicotinoid pesticides are applied directly onto seeds rather than sprayed onto plants, said Stephanie Darnell, a pollinator safety scientist at BASF, one of the top-three manufacturers of pesticides in the world.

That means farmers don’t have to spray neonicotinoids all over their fields, which can harm insects in and around those fields.

If you go back 50 years, everything was a very broad-spectrum insecticide, said David Fischer, chief scientist and director of pollinator safety with Bayer Crop Science in Research Triangle Park, N.C.

Broad-spectrum insecticides are chemicals that kill a wide variety of insect life, not just one or two species.

Fischer says the EPA has thoroughly examined the use of neonicotinoids in the field and come to the conclusion that, when used as instructed, the risk to the bees is low—even at the sub-lethal level.

But that hasn’t stopped lawmakers on Capitol Hill and in a handful of states from proposing bills to restrict neonicotinoid use. Rep. Earl Blumenauer (D-Ore.) has supported a number of bills to restrict use, and he thinks it’s inevitable that pesticide companies and farmers will have to find alternative that doesn’t harm pollinators.

“We’re finally seeing greater awareness and tying it to larger ecological questions, habitat protections, pesticide use that we should probably be using much more sparingly anyway,” Blumenauer said. “It’s a good time to move this forward.”

Listen and subscribe to the Business of Bees podcast from your mobile device:
Via Apple Podcasts |Via Pocket Casts |Via Spotify | Via Overcast

David Schultz
Reporter
Invasion of the Beehive Bodysnatchers (Podcast)
Honeybees Don’t Need to Be ‘Saved’ (Podcast)
How Bees and Farmers Got Together (Podcast)
How Apis Mellifera Became Our Go-To Honeybee (Podcast)
The Big Business of Bees: Episode 1 (Podcast)
© 2021 The Bureau of National Affairs, Inc.
All Rights Reserved