Manufacturers, farmers and other industry groups plan to appeal a federal court decision that reinstated in 26 states an Obama-era rule that defined which waterways are covered by Clean Water Act regulations.

The U.S. District Court for the District of South Carolina on Aug. 16 invalidated the Trump administration’s attempt for a two-year nationwide delay of the rule.

The action means the 2015 waters of the U.S. (WOTUS) rule, or clean water rule, is in effect in more than half the country. In 24 other states the rule remains blocked by two other federal courts pending their review.

“The ruling is problematic because it creates a patchwork of states where the WOTUS rule applies and others where it does not,” Peter Tolsdorf, National Association of Manufacturers vice president for litigation and deputy general counsel, told Bloomberg Environment by email. “The NAM will be appealing the decision in the [U.S. Court of Appeals for the] 4th Circuit.”

For farmers, manufacturers and miners in these 26 states and the District of Columbia, the court’s ruling means they would have to seek Clean Water Act permits for releasing pollutants into streams and wetlands that are defined as waters of the U.S. or face penalties up to $52,414 per day. The states where the rule is back in effect include California, Minnesota, Texas, and New York. 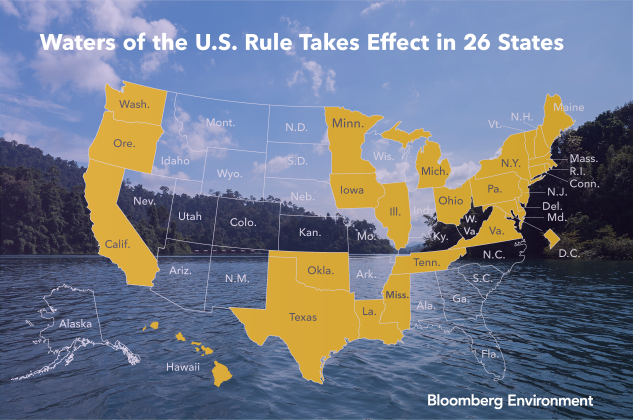 At least 30 states and industry groups have challenged the clean water rule. Other states including California, New York, Vermont, and Rhode Island, as well as environmental groups, support it.

Judge David C. Norton’s Aug. 16 ruling came in response to action taken by the Environmental Protection Agency and the Army Corps of Engineers in February to delay the rule from taking effect until Feb. 6, 2020, and reinstate a 1986 regulation clarifying the reach of the Clean Water Act.

At the same time, the two agencies began to take steps to withdraw the rule and rewrite it. Neither step has been completed.

“EPA and the Army will review the order as the agencies work to determine next steps,” an EPA spokesperson told Bloomberg Environment Aug. 16.

“We desperately hope the administration will take immediate steps in the court to limit the scope of this injunction to South Carolina,” said Ellen Steen, general counsel and secretary at the American Farm Bureau Federation, which belongs to a coalition of manufacturing and business groups that defended the Trump administration’s postponement of the rule and will now appeal the court’s decision. “Otherwise, this ruling puts farmers and ranchers in 26 states into enormous legal risk.”

The Trump administration’s attempt to postpone implementation of the waters of the U.S. rule was challenged by a coalition of regional and national environmental groups, including South Carolina’s Coastal Conservation League and American Rivers. The federal district court in South Carolina agreed that the government didn’t follow appropriate notice and comment procedures.

‘Once Again Law of the Land’

“By refusing to allow public comment and consider the merits of the WOTUS rule and the 1980s regulation, the agencies did not allow a ‘meaningful opportunity’ to comment,” Judge Norton wrote Aug. 16.

The court agreed with the environmental groups that delaying the 2015 rule would affect wetlands and downstream waters not just in South Carolina but across the U.S. Interestingly, Judge Norton’s rule does not apply to South Carolina, one of the 24 states where the rule remains blocked.

“Even though preliminary injunctions against the rule remain in effect for some states, elsewhere the Clean Water Rule is now once again law of the land—restoring protections for streams that help provide drinking water to millions of Americans,” John Rumpler, clean water program director for Environment America, told Bloomberg Environment in a statement.

“The court made clear that the Trump administration cannot ignore the law, science, or the views of the American people in its rush to undermine protection of rivers and clean water,” American Rivers President Bob Irvin said in an Aug. 16 statement.

The court also noted that the Administrative Procedure Act contains safeguards so that a new administration cannot withdraw, or in this case suspend or delay, regulations of a previous administration without careful planning and meaningful public input, Steven Miano, a shareholder attorney with Philadelphia-based Hangley Aronchick Segal Pudlin & Schiller, told Bloomberg Environment by email.

Judge Norton also took notice of several recent decisions in cases where the Trump administration rolled back regulations from the Obama administration without proper notice and comment.

For example, the Interior Department was unsuccessful in February when the U.S. District Court for the Northern District of California denied its efforts to delay a rule to reduce methane emissions from oil and gas fields on federal and tribal lands.

And in July 2017, the U.S. Court of Appeals for the District of Columbia Circuit struck down the EPA’s effort in Clean Air Council v. EPA to pause methane limits for new oil and gas drilling operations.

(Updated throughout with additional reporting.)