NuScale Power LLC and the Energy Department are vigorously promoting the company’s small modular nuclear reactor concept both in the U.S. and abroad as the beginning of a second act for nuclear energy.

Some of the roughly 29 electric utilities expressing early interest in the design say small modular reactors, or SMRs, remain a promising hedge against carbon emissions regulations even in an era of deregulation. Other utilities see regulatory challenges and costs associated with the reactors as extremely high.

The risk involved in investing in NuScale’s still-untested reactor is “scary,” but the technology has a clear place on an electric grid that uses more wind and solar power as a way to cut climate pollution, said Doug Hunter, president and CEO of the Utah Associated Municipal Power Systems, or UAMPS, a consortium of 46 utilities in six western states.

UAMPS is planning to be the first utility in the U.S. to buy electricity from NuScale’s SMR when the first reactor begins operating at Idaho National Laboratory.

If the reactor clears the Nuclear Regulatory Commission’s design certification process in the next few years, the first reactor is planned to begin operating at the lab in 2026 to power the lab itself and to UAMPS customers.

“About 10 years ago, our organization was very concerned about greenhouse gas regulation, and we wanted to find a hedge against that,” Hunter said. “I think it’s even more needed right now” because UAMPS members believe there is an increasing potential for carbon emissions regulations in the future despite the Trump administration’s retrenchment now.” 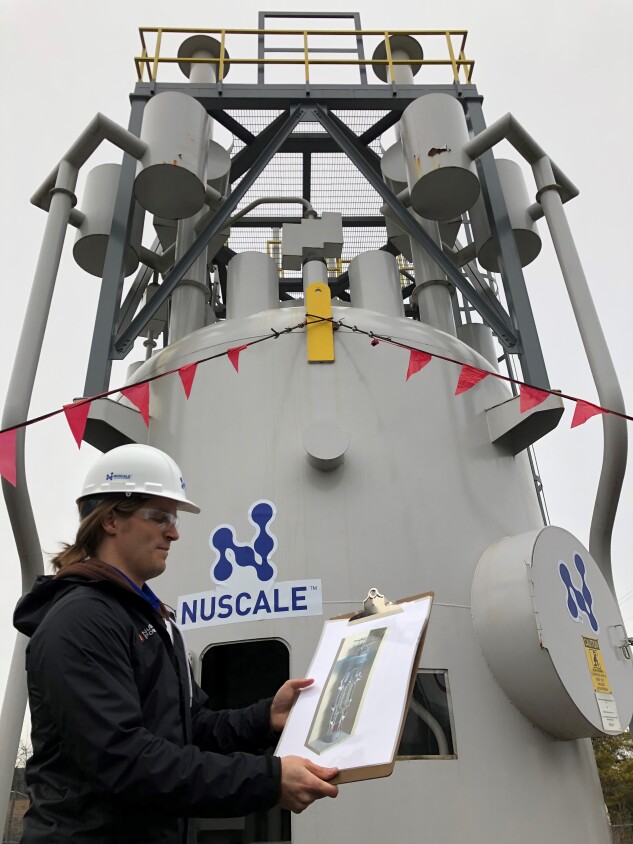 A NuScale Power employee at a mock-up of the top third of the company’s small modular nuclear reactor near Corvallis, Ore., on March 5, 2019.
Photographer: Bobby Magill/Bloomberg Environment

NuScale’s SMR is designed to be small enough to be built in a factory and assembled on site, helping to usher in a new era for carbon dioxide emissions-free nuclear energy amid rising worry about climate change. The company estimates that the first plant using SMRs will cost about $3 billion to build.

“We can move these reactors up and down very quickly,” he said. “This allows [utilities] to be 100 percent clean with a very high level of renewables. We see it very complementary.”

The Energy Department has spent about $280 million supporting NuScale, and on March 19 joined the company in announcing NuScale’s agreement with a Romanian energy company to take the initial steps in developing its small modular reactor in Eastern Europe.

“The Department of Energy applauds this important agreement to evaluate how small modular reactor technology could be utilized in Romania,” Energy Secretary Rick Perry said in a statement.

One of NuScale’s greatest opportunities to build its SMR is in countries that don’t have access to the lower-cost natural gas that competes against nuclear power in the U.S., NuScale co-founder and chief technology officer Jose N. Reyes said.

“We have good indicators that the global market is quite large,” he said. 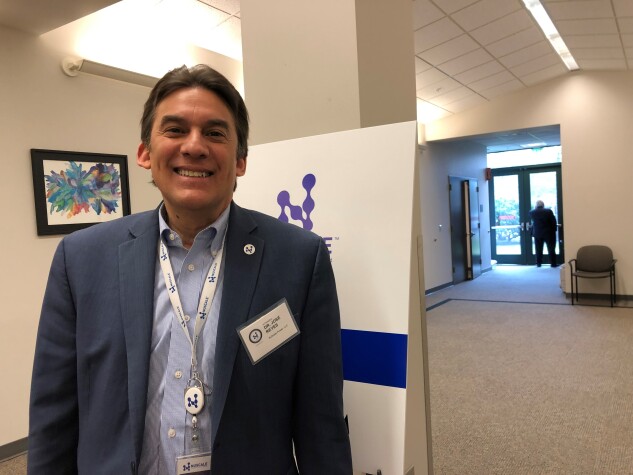 Utilities are still taking a wait-and-see approach to NuScale, Andrew Sowder, an executive in the Advanced Nuclear Research Program at the Electric Power Research Institute, said.

PacifiCorp, an Oregon-based subsidiary of Berkshire Hathaway Energy, is among the utilities that say they are interested in NuScale’s technology, but the costs may be too great.

“We certainly are interested in the technology,” but the learning curve associated with small modular reactors and the levelized cost of energy from the reactors, or the cost over their lifetime, are both expected to remain high, PacifiCorp spokesman David Eskelsen said.

“This falls into ‘maybe someday’ technology,” said Steve Corson, spokesman for Oregon-based Portland General Electric, a former member of the NuScale advisory board.

He said NuScale couldn’t build a small modular reactor in Oregon anytime soon because under state law Oregon voters must approve any new nuclear reactor, and one can’t be built until the federal government opens a permanent nuclear waste repository.

Congressional efforts to restart the approval process of the only proposed waste repository, Nevada’s Yucca Mountain, have stalled.

The Energy Department is promoting the NuScale reactor as safe, even though the NRC expects to complete its safety evaluation for reactor in late 2020.

“Its passive safety cooling system is a game-changer and essentially makes the reactor walk-away safe—without any action required by the operator to safely shut the reactor down,” Edward McGinnis, principal deputy assistant secretary for the Office of Nuclear Energy, wrote in a 2018 post on the Energy Department’s website.

When asked about the accuracy of the Energy Department’s statements about NuScale’s safety, NRC spokesman Scott Burnell said, “We’re still conducting our review, so we have no conclusion at this point.”

The Energy Department didn’t respond to requests for comment.

Edwin Lyman, acting director of the nuclear safety project at the Union of Concerned Scientists, said he worries the NRC may license NuScale’s reactor with less stringent security and emergency evacuation requirements that will help the company lower its costs.

“Any success NuScale has at selling its product should not come at the expense of the safety and security of the public,” Lyman said.

Electric utilities in Arizona, New Mexico and several other states are interested in NuScale’s SMR, and the company sees the possibility for six projects in those states, including the project at Idaho National Laboratory with UAMPS, Tom Mundy, NuScale chief commercial officer, said.

Many electric power companies in states seeking to cut their carbon footprints acknowledge that they may need nuclear power to fully decarbonize, Mundy said.

The Salt River Project, another Arizona utility, has no near-term plans for new nuclear generation” but is interested in “staying engaged” to monitor advancements in SMR technology, SRP spokesman Scott Harelson said.

But a good estimate for the actual cost of a NuScale SMR doesn’t exist because there are too many unanswered questions about safety and security, Allison Macfarlane, who served as chairwoman of the Nuclear Regulatory Commission from 2012 to 2014, said.

“It hasn’t gotten a license yet. Major issues about it haven’t been decided,” Macfarlane said. “They have no idea how much these things are going to cost.”

Macfarlane said the idea of modular reactor is sound, but it’s exceptionally difficult to build one.

“The people at utilities, they’re not idiots. This is a total unknown. There are too many questions. They don’t know how long it will take” for the NRC to certify the reactor and for NuScale to build it, Macfarlane said.