Newark isn’t alone: At least 10 other cities have been struggling for years with elevated levels of lead in drinking water, according to a Bloomberg Environment analysis of water quality data.

None of these geographically dispersed cities have taken the extreme measure of providing residents with bottled water, as New Jersey’s largest city was forced to start doing earlier this month.

But all have exceeded the EPA’s lead limit in each of the past two years. As a result, they now must wage costly and—in some cases—yearslong campaigns to improve their water quality and remove the lead pipes that are causing the problems. All of this takes place with the memory of Flint, Mich., catastrophic lead crisis fresh in the minds of many.

“We had to make changes to our water distribution system,” Will Pickering, a spokesman with the Water and Sewer Authority in Pittsburgh, the largest of the 10 cities with lead problems. “It wasn’t an easy switch.”

Nsedu Obot Witherspoon, executive director of the Children’s Environmental Health Network, said the events of the past few weeks in Newark should serve as a reminder to all utilities that a fine line exists between managing elevated lead levels and entering a full-blown lead crisis.

The Environmental Protection Agency requires nearly all water utilities to sample lead levels up to twice a year in the tap water of a handful of their customers’ homes.

Small utilities or those with continually low levels of lead are allowed to sample less frequently.

If more than 10% of these samples contain lead above 15 parts per billion—a number the EPA calls its “action level"— the utilities must then take a range of further steps. This can include more intense sampling, using different anti-corrosion chemicals, and even ripping lead pipes out of the ground. 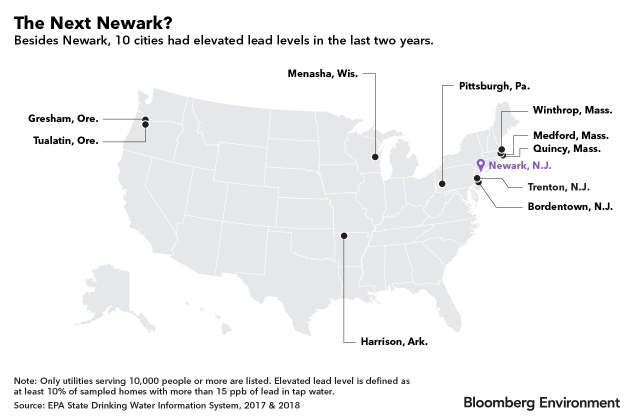 These are among the measures officials in communities such as Bordentown, N.J., Gresham, Ore., and Winthrop, Mass., told Bloomberg Environment they’re taking to get their lead levels down.

But no quick or inexpensive way exists to accomplish this goal.

Many cities, especially older ones built before the dangers of lead were well known, have thousands of lead service lines that run from water mains into homes. Trenton, N.J., for example, has approximately 21,000 lead service lines, according to Michael Walker, a spokesman for its municipal water utility.

An EPA estimate from 2018 found that replacing lead service lines will cost an average of $4,700 per pipe, a number that could climb as high as $12,300 depending on how much pavement would need to be ripped up.

And removing all of these pipes is not only costly but, in some cases, may also require utilities to obtain permission from homeowners to work on their private property.

The EPA is also working to overhaul its standards for lead in drinking water for the first time in nearly 30 years, with a new rule awaiting approval by White House regulatory reviewers. These standards have long been criticized for allowing utilities to keep lead pipes in place rather than requiring them to be replaced.

Drops In a Pool

For comparison’s sake, a measurement of 15 parts per billion is equivalent to 15 drops of water in a swimming pool, according to a fact sheet from Kansas State University.

But Witherspoon said lead can cause serious harm at far lower levels than this.

Though it was widely used in plumbing, paint, and many other products for years, lead is a toxic metal that can cause irreversible neurological damage in children, both before and after birth.

“What we know now that we didn’t know a decade ago is that low does matter,” Witherspoon, who served on an EPA advisory committee on lead, said.

The Centers for Disease Control and Prevention cut its level of concern for lead in children’s blood in half in 2012, and Witherspoon said a further reduction may be necessary.

The American Academy of Pediatrics says there is no safe level of blood lead concentration for children.

The EPA requires all utilities that exceed its action level to post their results to its online State Drinking Water Information System database. This data shows that some cities have been struggling with lead issues for years.

For example, the water utility in Harrison, a city of around 13,000 in northern Arkansas, first exceeded the action level in 2014. It then posted exceedances in each of the following four years, with its most recent sampling in 2018 showing its highest lead levels yet during this time period.

By contrast, Menasha, Wis., first exceeded the action level in 2017 and then again the following year, with both readings coming in at just barely above 15 parts per billion.

Adam Smith, Menasha’s water utility manager, acknowledged about 440 lead pipes are in use underneath the city of more than 18,000 people. He said the city sent a section of one of these pipes to an EPA lab in Cincinnati to analyze the effectiveness of the anti-corrosion chemicals Menasha was using.

The city also started a program in which a customer can take out a zero-interest loan to pay for one third of the cost of pipe replacement, with the utility covering the other two-thirds of the costs. But Smith said, even with this program in place, it will still take Menasha another decade to remove all of its lead pipes.

In the meantime, he said, the utility is selling lead water filters to its residents at cost.

But serious questions have arisen about the efficacy of these filters, after tests at some homes in Newark showed that even filtered water contained high levels of lead.

The results of these tests are what prompted the EPA to ask state and city officials on Aug. 9 to start doling out bottled water.

Lynn Thorp, a director with the nonprofit group Clean Water Action, said much more investigation and testing is needed before anyone can definitively say that water filters are ineffective. She said it’s possible the filters at the Newark homes were installed incorrectly or were damaged by incorrect usage.

“Everyone involved in this needs to figure out how to give customers using these the most clear, concise instructions,” Thorp, who served on the lead advisory committee with Witherspoon, said. “If you’re using them wrong, that’s not helping.”

Witherspoon said utilities should develop plans now for how they would work with other municipal departments to distribute bottled water to their customers.

“We’ve seen more than enough examples where the right hand didn’t know what the left hand was doing,” Witherspoon said.

She specifically pointed to reports that Newark officials temporarily halted bottled water delivery last week after learning their supplies were past the expiration dates printed on the bottles.

“I wonder if we have learned from our risk analysis at all,” Witherspoon said. “Nothing is going to work perfectly in a crisis, but there are plans you can make.”

To contact the reporters on this story: in Washington at dschultz@bloombergenvironment.com; in New York at jherzfeld@bloomberglaw.com