The three towers at the Ivanpah Solar Electric Generating System are shown in operation in the Mojave Desert in California near Primm, Nev. The towers are similar to what Sandstone Energy Project had envisioned.
Photographer: Ethan Miller/Getty Images

The Trump administration plans to fast-track one of the world’s largest solar power projects—10 “power towers"—providing renewable energy for 1 million Californians. But it could potentially kill wildlife, especially birds flying through the heat of its concentrated sunlight.

SolarReserve LLC is proposing to build a 2-gigawatt concentrating solar-thermal power plant called the Sandstone Solar Energy Project on 20,000 acres of federal land in western Nevada. The company plans to begin construction in 2020 or 2021 and complete the project in phases over seven years. 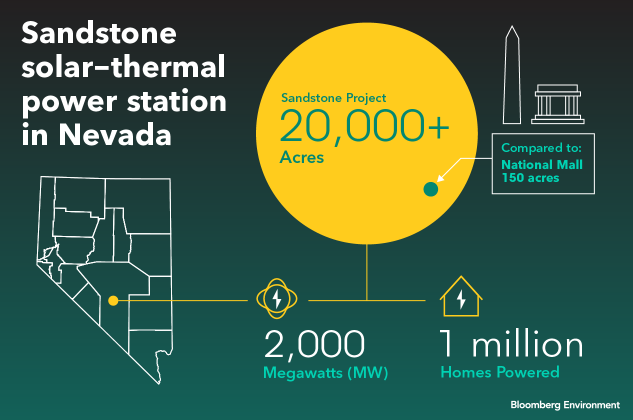 As the administration plans to rush through the project’s environmental review as part of its deregulatory agenda, environmental groups worry problems will be overlooked. Sandstone, they say, could kill exponentially more birds than other concentrating solar plants in the region, which have been found to burn the animals as they fly through the intense heat of the sunlight focused on the power towers.

The project would be capable of storing solar energy for hours after the sun goes down. Sandstone is expected to help California wean itself off natural-gas power plants and meet its need for renewable energy to address climate change.

“The value’s huge,” Varun Sivaram, a science and technology fellow at the Council on Foreign Relations and a solar energy researcher in Washington, told Bloomberg Environment. “California has a huge flexibility problem, and the storage in a 2 gigawatt plant is going to provide immense value in terms of integrating a large amount of renewables onto the grid.”

Orbs Above the Desert

Sandstone is similar to the 392-megawatt Ivanpah Solar Electric Generating System in California and SolarReserve’s own 110-megawatt Crescent Dunes Solar Energy Project, because it will use thousands of mirrors called heliostats to focus sunlight onto a power tower to generate electricity.

Sandstone is among eight solar power projects that the federal Bureau of Land Management is planning to permit by 2019—the first the agency will have approved since 2015.

The project would be among the first major renewable energy projects subject to the Trump administration’s new limits on environmental reviews under the National Environmental Policy Act. What was formerly a years-long process is being compressed to no longer than one year.

“If it’s the case that deregulation gets the better of the anti-renewables sentiment of the administration, I’d be first to cheer,” Sivaram said. “Let’s see if this follows the timeline that has been hinted at.”

The sheer size of the Sandstone project could have an irreparable impact on desert ecosystems in southwest Nevada, especially for birds, pronghorn, and mule deer, environmental groups said.

“Given how long arid ecosystems take to recover, impacts from any form of development in the Mojave Desert are essentially irreversible,” Mark Salvo, vice president of landscape conservation for the Defenders of Wildlife, told Bloomberg Environment.

“This area at the northern edge of the Mojave ecosystem could be important for connectivity [and] species movement as habitat types shift northward in response to climate change,” he said.

Concentrating solar projects similar to Sandstone have been found to kill thousands of birds annually, many of which collided with heliostats or were incinerated as they flew through the highly focused sunlight, Salvo said.

The BLM may not be able to study Sandstone’s full environmental impact with its year-long environmental review process, Salvo said.

No Rush for Permitting

SolarReserve, which has applied for a right-of-way to build the first eight of 10 power towers, isn’t pushing the BLM to speed up its permitting process, SolarReserve CEO Kevin Smith told Bloomberg Environment.

“We’re going to make sure that BLM has and takes the proper time to fully evaluate the environmental issues,” Smith said. “We’re not expecting a 12-month process because of the size of the project.”

SolarReserve chose a site in a broad desert valley northwest of Tonopah, Nev., for Sandstone because the valley is flat; has 20,000 acres of land available that have few conflicts with other uses; and has good access to an electric power transmission corridor, according to the company’s project application.

It’s important that Sandstone be carefully placed and built to minimize harm, Daniel Kammen, director of the Renewable and Appropriate Energy Laboratory at the University of California-Berkeley, told Bloomberg Environment.

“Remember, just because a project is renewable does not mean that it necessarily is an environmental win,” he said. “We have plenty of land and places where we can install green energy and limit social and environmental damages.”

As the only concentrating solar-thermal power project being planned in the U.S. today, Sandstone defies the domestic trend toward building solar farms using photovoltaic solar panels.

Concentrating solar power has fallen out of favor in the U.S. because of its high cost relative to natural gas and photovoltaics, which have fallen dramatically in price in recent years.

Electric utilities have invested in power plants that run on natural gas made cheap because of fracking, meaning projects like Sandstone are mostly built overseas where natural gas is more expensive.

But SolarReserve is betting that Sandstone’s ability to store the sun’s energy for up to 10 hours after the sun begins to set, using the company’s molten salt technology, will make the project profitable and help California utilities meet the state’s mandate for more renewable electricity.

“The impetus [for Sandstone] really is energy storage,” Smith said. “Our technology is really built for large-scale bulk energy storage—moving four, to six, to eight hours of generation from the morning to the evening.” 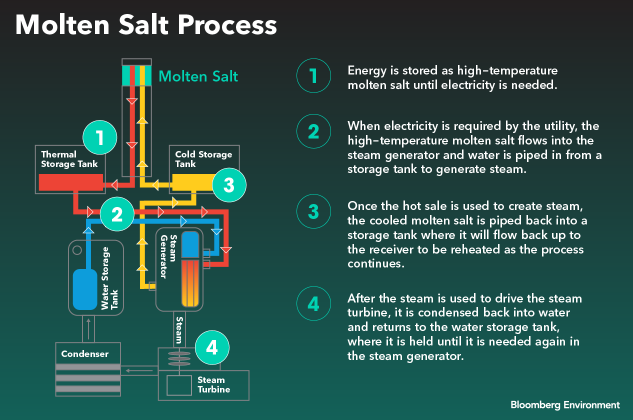 Smith expects Sandstone to help California electric utilities solve a problem with solar panels: Unless large batteries can store the electricity the panels produce, solar panels can only generate electricity during the day. That often forces utilities to rely on natural gas-fired power plants to handle the high demand for electricity early in the evening.

The company expects the project to store more solar energy at lower cost than large batteries used with photovoltaic projects. California needs projects that can store up to eight hours’ worth of electricity in order to meet peak demand for electricity on a daily basis, Smith said.

“That’s not how PV-plus-batteries has been built and can operate,” he said. “It’s really more for storage like ours.”

Sandstone will help California meet its renewable energy goals and help electric power companies cope with the intermittent nature of wind and solar electricity streaming onto the grid, Smith said.

California has a goal for 50 percent of its electricity to come from renewables by 2030, and the state Assembly is poised to vote later this month on a bill that would set a 100 percent renewables target for 2050, potentially making projects like Sandstone more attractive to developers.

“The California clean energy agenda is the future, and Sandstone fits as long as the use of public lands is done with a careful and light footprint on nature and indigenous communities,” Kammen said.

California will need to replace many of its natural gas-fired power plants after 2025, and it will be seeking new sources of low-carbon energy as it tries to meet its renewable power mandate, Mehos said.

For Sandstone, “the timing is right if the price is right,” he said.