A westward view from the Ravens Roost overlook near the Appalachian Trail in the George Washington National Forest, where the Atlantic Coast pipeline would pass.
Photographer: Ellen M. Gilmer/Bloomberg Environment

Lynn Cameron inspected the layers of mountain ridges from an overlook on the Appalachian Trail, and imagined how the scenery might change. Her gloved hand drew an imaginary line across the distant landscape to show the proposed path of the Atlantic Coast natural gas pipeline.

“That would just transform this,” the Virginia Wilderness Committee board member said of the pipeline, as a light snow fell on central Virginia’s George Washington National Forest.

Atlantic Coast project engineer Greg Supey doesn’t get the fuss. He sees the terrain as fertile ground for Dominion Energy Inc.'s painstakingly studied route that minimizes impacts to the trail and the environment.

“In reality, this is the most scrutinized project that I’ve ever been on,” Supey said, studying the landscape from a nearby stretch of trail another January day. “It’s unbelievable what we have to go through for this one, and that’s good.”

Cameron builds trails. Supey builds pipelines. Soon, Supreme Court justices reviewing the case from 150 miles away in Washington will decide whose vision for this land prevails.

The Supreme Court hears oral arguments Feb. 24 in the high-stakes battle over the $7.8 billion Atlantic Coast pipeline. The justices must decide whether federal officials overstepped when they approved the project’s path across the Appalachian Trail.

The pipeline, backed by Dominion and Duke Energy Corp., would stretch some 600 miles from West Virginia’s shale gas fields to electric utilities in Virginia and North Carolina, helping to feed power demand on the Eastern Seaboard—though critics question how strong that demand really is. 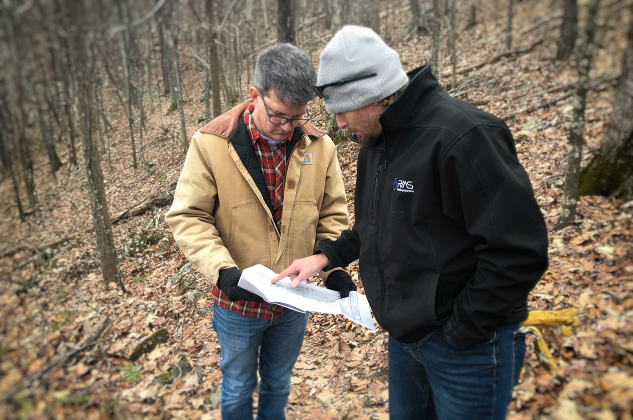 The Blue Ridge mountains and the adjacent trail stand between the pipeline’s start and end points. The planned route would cross the range here, about 40 miles southwest of Charlottesville, Va. Conservation groups are concerned about impacts to the environment and the Appalachian Trail experience.

The resulting Supreme Court dispute is one of many clashes between the Trump administration’s quest for energy dominance and environmentalists’ efforts to protect the nation’s wild lands. More broadly, it spotlights a persistent challenge that transcends political winds: how to build America’s infrastructure without ripping up America.

Robert Percival, who heads the environmental law program at the University of Maryland, called the high court’s interest in the dispute “idiosyncratic,” given the case’s narrow focus on the Appalachian Trail. But, he said, the court’s conservative majority is likely to view it as an opportunity to telegraph broader leanings on the spread of energy infrastructure across the country.

“I think the justices would be inclined to want to signal they don’t want legal obstacles in the way of pipeline development,” he said.

The Appalachian Trail provides an iconic backdrop for the debate. Stretching more than 2,000 miles from Georgia to Maine, the “footpath for the people” meanders through the East Coast’s most prized mountain scenery and attracts hikers from around the world. 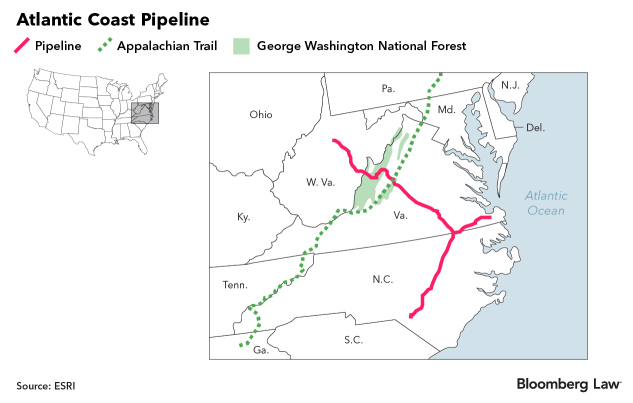 ‘You Can’t See It From Here’

The planned route crosses under the Appalachian Trail near the Blue Ridge Parkway. Builders plan to drill sideways through the mountain’s bedrock and basalt, threading the pipe through a nearly mile-long horizontal borehole 700 feet beneath the footpath.

Atlantic Coast estimates it would take a year to complete that work. The trail would remain open throughout, but hikers would often hear the roaring sound of machinery instead of the trail’s typical soundtrack of woodpeckers and crunching leaves.

With drilling rigs planted at the ends of the underground passage, each more than 1,000 feet from the trail, a hiker standing atop the junction wouldn’t see any evidence of a pipeline.

“You can’t see it from here,” said Supey, positioning himself at the crossing coordinates after a short trek on the trail. “Even when it’s built, you won’t be able to see it.”

Millions of cubic feet of natural gas rushing deep underground may be imperceptible to hikers passing directly overhead, but they’d see the project soon enough, on nearby segments of trail where the pipeline corridor would jut into panoramic mountain views.

“From this popular viewpoint here at Cedar Cliffs, we’d be able to look right down upon the Atlantic Coast pipeline corridor, running down through this intact forestland,” Cameron said from an overlook, taking a rest after following the Appalachian Trail’s white blazes up the path.

The pastoral Shenandoah Valley unfolds in the foreground. The angular slopes of Torry Ridge cut in from the south, and backcountry peaks of St. Mary’s Wilderness loom in the distance to the southwest.

“There really wouldn’t be any way to mitigate the scenic impacts,” Cameron said. 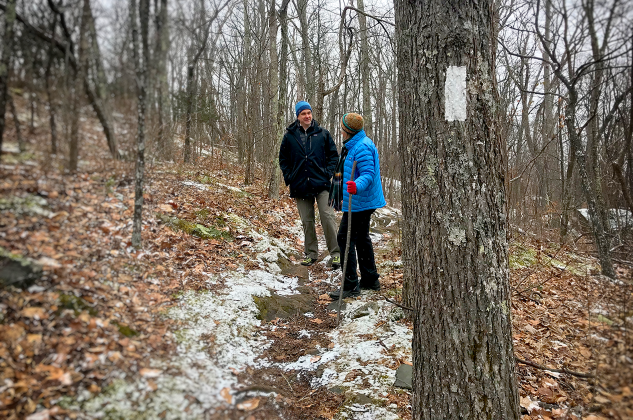 Atlantic Coast backers are quick to pull up computer simulations that show the finished pipeline corridor as a fairly inconspicuous ribbon of cleared land. The company plans to seed the route with native grasses and allow trees and bushes to regrow along the edges.

The precise issue before the Supreme Court seems worlds away from the infrastructure versus nature narrative that dominates the public debate. The justices must consider a technical question: Which federal agency is in charge of what?

The dispute arose in early 2018 when the U.S. Forest Service approved Atlantic Coast’s plan to burrow beneath the Appalachian Trail in the George Washington National Forest.

Conservation groups sued the agency, arguing that the National Park Service, as overseer of the Appalachian Trail, has exclusive authority over proposed trail crossings on federal lands. The Forest Service, an arm of the Department of Agriculture, had no power to approve the right-of-way, they said.

The Richmond, Va.-based U.S. Court of Appeals for the Fourth Circuit agreed and scrapped the agency’s approval. Atlantic Coast and the Forest Service went to the Supreme Court, arguing that the Fourth Circuit’s interpretation would turn the trail into a 2,000-mile blockade for development.

That’s because the Mineral Leasing Act, which gives agencies power to approve pipelines on federal land, excludes national parks. If the Appalachian Trail is considered parkland in the National Park Service’s domain, only Congress could approve Atlantic Coast’s crossing.

The two sides dispute whether the ground the Appalachian Trail sits on qualifies as parkland or forestland.

An anti-pipeline sign stands on the side of a road near the Atlantic Coast pipeline’s planned crossing of the Appalachian Trail.
Photographer: Ellen M. Gilmer/Bloomberg Environment

“There’s nothing unusual or odd about that way of speaking, to say that, yes, the Appalachian Trail is a trail administered by the Park Service that, at least in the relevant stretch here, is on Forest Service land,” Kirkland & Ellis LLP attorney Paul Clement, who is representing Atlantic Coast, said in an interview.

Clement visited the site in January, explaining that “given the nature of this case, it really helps to really see it with your own eyes.”

Lawyers for the conservation groups say the land and the trail are inseparable, and that they’ve long been considered part of the national park system.

But that doesn’t mean the trail acts as a 2,000-mile barrier to development, said Southern Environmental Law Center attorney Gregory Buppert, who is helping to represent the environmental coalition.

The challengers’ brief explains that 55 pipelines have crossed the Appalachian Trail on private lands, state lands, and existing rights of way—steering clear of the federal authority conflict that exists where the trail is on federal lands.

That’s of little relief to pipeline developers, as the trail still crosses more than 1,000 miles of national forests along its route from Georgia to Maine. Atlantic Coast maintains that Congress never intended for the trail to be a barrier to well-planned pipeline development at all.

More Trouble on the Horizon

The Atlantic Coast pipeline still needs numerous green lights from federal agencies before natural gas can ever flow through it, even if the Supreme Court sides with Dominion and the Trump administration.

Construction has been on pause for more than a year while the company awaits a new federal analysis of endangered species impacts, after the Fourth Circuit struck down two earlier versions.

The appeals court has thrown out other approvals, too—most recently tossing a state air permit for a compressor station in the historically black community of Union Hill, Va.

Atlantic Coast’s lawyers point to that losing record in court as evidence that the Fourth Circuit is second-guessing federal officials too often.

“If you look at the pattern of these decisions, the Fourth Circuit is looking with a degree of skepticism about the decisions made by the expert agencies that—if that’s the way the judicial review is going to work in this space—it’s going to become practically impossible to build a pipeline,” Clement said.

Atlantic Coast is less than 6% complete, but backers are optimistic they can resolve pending legal issues quickly. Construction manager Ray Givens says his team is ready to start drilling beneath the Appalachian Trail as soon as they get the all-clear from the Supreme Court—a decision expected by June.

“Then,” Givens said, “we would mobilize to begin construction for July.”

To contact the editors responsible for this story: at ghenderson@bloombergenvironment.com; at csaenz@bloombergtax.com