The Rio Grande Gorge at the Rio Grande del Norte National Monument in New Mexico, which is overseen by the Bureau of Land Management.
Photographer: Bobby Magill/Bloomberg Environment

Public lands totaling about one-tenth of U.S. area would be more subject to the whims of Washington politics and fossil-fuel interests if the Bureau of Land Management headquarters are moved to a Western state, according to former agency officials and conservation groups.

The Interior Department plans to move BLM’s Washington headquarters—or “elements” of it—to a yet-undecided Western city as part of an Interior reorganization plan announced in 2018.

Decisions about developing public lands for fossil fuels and environmental safeguards would be affected by the move or if Interior scatters some BLM headquarters career staff across the West, Kit Muller told Bloomberg Environment. He was a strategic planner for the BLM in its Washington headquarters until he retired in 2018 after 38 years with the bureau.

The staff would be less able to work together and prevent federal decisions from being politicized, Muller said.

“In part it’s symbolic—a symbolic move. That will play well in certain circles. In part, it’s really to make the BLM less of a national presence, all told,” Muller said.

A Repository of Resources

The BLM’s territory is vast. It manages 245.7 million of acres of public land, mostly in 12 Western states. The agency also oversees oil, gas, and other minerals on about 800 million acres nationwide. Its mission by law is to oversee multiple uses of the land while conserving its natural, historical, and cultural resources. 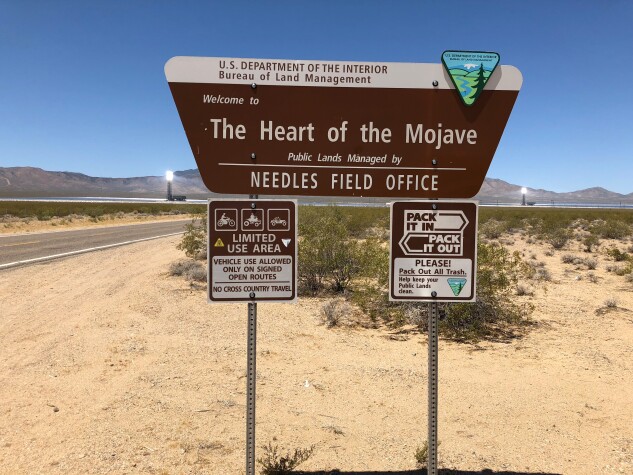 The Ivanpah concentrating solar power plant in California is on land administered by the Bureau of Land Management.
Photographer: Bobby Magill/Bloomberg Environment

BLM land is public—all Americans have a stake in it—and decisions about how it should be used shouldn’t be overly influenced by local politics in the West, advocates say.

“It just helps to have the BLM director back in Washington where you’re somewhat removed from the politics of the West,” said Mark Squillace, a professor of natural resources law at the University of Colorado, Boulder.

But fossil fuels producers on public land say the BLM best represents the public when decision-makers are close by.

“I don’t see a downside to BLM moving out West,” said Kathleen Sgamma, president of the Western Energy Alliance, an oil and gas industry trade group based in Denver.

“The decisions that are made by BLM affect mostly Westerners because 98 percent of BLM lands are west of the Mississippi. It only makes sense to have BLM out here closer to the people who are directly affected by its decisions,” she said.

The proposal to move the headquarters comes after decades of clashes and tension between federal land managers and some rural Westerners over federal decisions about national monuments, oil and gas leasing, grazing, and public access on BLM and other federal land.

A BLM headquarters in the West would give BLM’s management the opportunity to have “face to face” interaction with people in local communities directly affected by federal land and minerals decisions, said Jake Garfield, a policy analyst in Utah’s Public Lands Policy Coordinating Office, which is headed by former BLM Director Kathleen Clarke, a Republican. Clarke referred questions to Garfield.

The office advocates for the state’s priorities on federal lands, such as the right of local counties and others to build roads into public lands to provide access to recreation and industry.

“We’re not advocating for a change for a location in any way that will increase the state’s influences,” Garfield said. “We just think it will be beneficial for BLM leadership” to be in the West where they are “out in the landscape” and can speak more directly to locals who know the issues.

Utah has a long history of opposing federal control of public land. The Legislature passed a law in 2012 demanding unsuccessfully that the federal government transfer 31.2 million acres of public land to Utah so the state could benefit from developing it for oil, gas, mining, recreation and other uses.

Where Decisions Are Made

Citizens always benefit when decisions are made by those who are most familiar with the issue at hand,” Scott Cameron, principal deputy assistant Interior secretary for policy, management and budget, said April 30 in written testimony before a House Natural Resources subcommittee.

The BLM has a decentralized structure composed of state-level offices and lower-level field offices scattered around each Western state, where decisions about land use plans and environmental impact statements are to be made.

But over the years, and especially in the Trump administration, political appointees at Interior headquarters have become more involved in decision-making, cutting out career staff, Muller, the former BLM planner, said.

The plan to move the headquarters of BLM and the U.S. Geological Survey, which isn’t a regulatory agency, would put them “closer to the people affected by their decisions,” Cameron said in testimony.

The BLM by the latest count has 376 employees in Washington. Interior is assessing the availability and cost of office spaces in different cities, Cameron said at the hearing.

It’s unclear what a BLM headquarters move would mean for public lands protection because the agency’s structure already allows for “undue influence” from the energy industry and state governments eager to open sensitive lands to drilling and mining, said Erik Schlenker-Goodrich, executive director of the Western Environmental Law Center, a regional environmental group.

But he and representatives of other environmental groups said a move would make BLM even more subject to industry interests.

BLM headquarters is already known to favor the energy industry by stripping out environmental and climate protections from proposed energy and other projects even if they’re recommended by local officials, he said.

Another former BLM official said the “undue and illicit” influence over nationally significant lands by local interests would only become worse if the agency moves west.

Federal lands “would come under, I believe, untold pressure to conform to the wishes of the local interests as opposed to the national interest,” said Patrick A. Shea, a former BLM director and deputy assistant Interior secretary in the Clinton administration.

The move would dilute the BLM’s influence within Interior and help to exclude the agency from advocating for itself in the appropriations process on Capitol Hill, Shea said.

Michael R. Bromwich, the Obama administration’s first director of the Bureau of Ocean Energy Management, another Interior agency, said the BLM and USGS headquarters moves seem as if they are “a way to get rid of some career personnel who have been in key positions in those agencies.”

In Congress, Republican Western lawmakers for years have been calling for Interior or some of its agencies to move to their states or districts.

Sen. Cory Gardner (R-Colo.) introduced legislation in 2017, cosponsored by Sen. Steve Daines (R-Mont.) and three other Republicans, that would have required the BLM to move its headquarters. The bill stalled in committee.

“I think it ought to be in Grand Junction, Colo.,” Gardner told Bloomberg Environment June 3, referring to a city surrounded by BLM land between Denver and Salt Lake City. “It makes perfect sense. We’re going to push like hell to make it happen.”

— With assistance from Tiffany Stecker.