The EPA went from issuing virtually no significant new use rules for new chemicals since the Trump administration arrived to releasing eight batches of these rules—covering a total of 296 new chemicals—since Aug. 1.

The rules broaden sales opportunities for both the companies that designed these chemicals and ones that want to make or use them, Richard Engler, who was a chemist at the Environmental Protection Agency for 17 years, told Bloomberg Environment.

The regulatory surge broadens the health and environmental safeguards the agency already required when it reviewed those chemicals, Jeffery Morris, director of the EPA’s Office of Chemical Safety and Pollution Prevention, told Bloomberg Environment Nov. 1.

But details in those rules released since Aug. 1, and assumptions that the agency made about the chemicals’ effects on people and the environment, weaken protections required by the the 2016 Toxic Substances Control Act amendments, environmental health groups said.

Also, the most recent batch of new rules, which the EPA released Oct. 16, allowed 13 new chemicals with agency-recognized potential risks onto the market and violated the nation’s main chemicals law, according to Daniel Rosenberg, an attorney with the Natural Resources Defense Council, and Richard Denison, lead senior scientist with the Environmental Defense Fund. 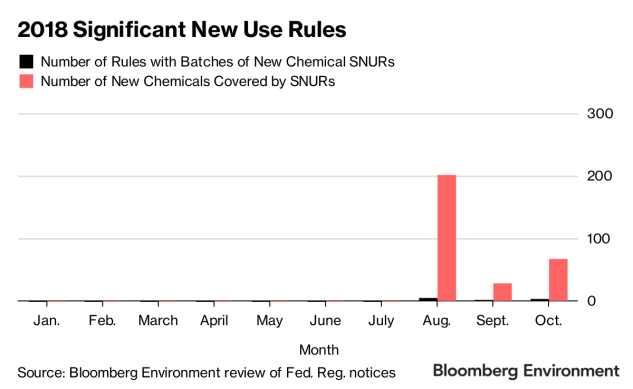 Among the 296 new chemicals covered by EPA’s recent rules—which represent more than a fourth of the roughly 1,000 new chemicals the agency reviews annually— are ones destined to coat metal, make optical lenses, dye paper, and clean electronic equipment. Chemical manufacturers that seek approval to make these new chemicals generally ask the EPA to keep their names confidential in order to protect their research and development investments.

Significant new use rules (SNURs) under TSCA are a safety checkpoint. The rules describe ways the EPA has determined that a new chemical could be inhaled, ingested, touch the skin, or get into the air, water, or soil, and possibly pose an unreasonable risk of injuring people or the environment. The agency dubs that “use” of the chemical as new.

The company that wants to produce a new chemical may not plan to release it into water or it could agree not to, he said. It also could sign a legally enforceable consent order barring it from doing so.

The agency then issues an immediately-effective or a proposed significant new use rule—or both simultaneously—that requires the original manufacturer and other companies to notify EPA 90 days before they release that new chemical into water.

The 90 days gives the agency a chance to see if the particular way that company would release the new chemical to water is a concern, the EPA’s Morris said.

“We want to look at it and evaluate if that would pose an unreasonable risk,” he said.

The agency then can impose additional limits on a proposed new use, and it can require the company to produce data so it can better understand the potential problem.

New use rules aren’t the most urgent problem that the council’s chemical manufacturers face, she said. Instead, it is the months—in some cases years—it takes the EPA to decide whether a new chemical can be made, Schmidt said by email.

The law gives the agency 90 days to complete its review, allowing for a one-time 90-day extension.

The EPA is working to speed its new chemical reviews, according to Morris.

The new use rules issued since August show new compounds already have reached the market, and the EPA is catching up by issuing SNURs when those types of rules are required, Morris said. The pace will level off after the EPA gets caught up, he said.

The EPA’s release of the new use rules is good news for the original manufacturers, said Engler, who became chemistry director at the Washington office of Bergeson & Campbell PC after leaving the EPA.

Many consent orders include restrictions limiting how far down the supply chain a new chemical can be sold until SNURs are issued, he said.

Once the SNURs are proposed, the new chemicals can be sold further down the supply chain.

The infrastructure the EPA has built since 2016 to oversee new chemicals is so riddled with cracks that the agency is failing to protect people and the environment as amended TSCA requires, Rosenberg and Denison told Bloomberg Environment.

The combined impact of these safety gaps is that the EPA is failing to protect workers, consumers, the public, and the environment, and is violating the law, he said.

The Oct. 16 batch of SNURs illustrates another way the agency is defying TSCA, according to Rosenberg.

The TSCA amendments require the EPA to control potentially unreasonable risks from known, intended, or reasonably foreseeable uses of a new chemical before it enters commerce, Rosenberg said.

The agency allowed the 13 chemicals identified in that rule to enter commerce despite recognizing they could pose risks, he said. The agency then proposed the SNURs to control the reasonably foreseeable risks.

The EPA proposed that strategy in December 2017, prompting the Natural Resources Defense Council to challenge it in a federal appeals court.

The council then dropped its lawsuit in August because the EPA hadn’t used its proposed strategy. Now it has.