The Pentagon may be forced to follow new state environmental pollution standards for a family of manmade “forever chemicals” that may have been spilled at hundreds of military sites in the U.S., Defense Secretary told lawmakers.

Esper was pressed Wednesday at a House Armed Services Committee hearing over the military’s use of widely used firefighting foam containing chemicals known as per- and polyfluoroalkyl substances, or PFAS, that never degrade.

He said the Pentagon will report to Congress in about two weeks on pollution that may have occurred at hundreds of U.S. military sites. 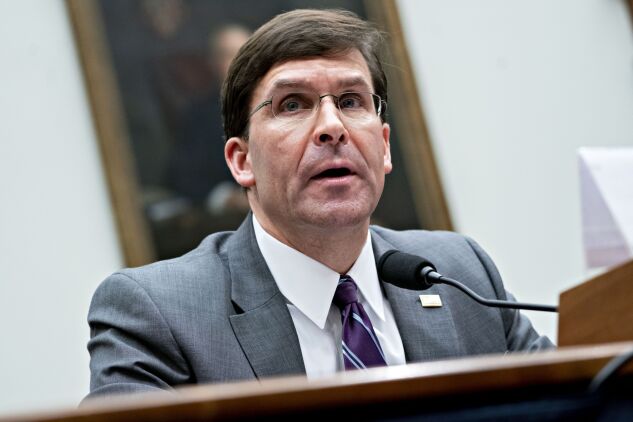 Committee member (D-Mich.) pressed Esper on whether the Pentagon would adhere to new environmental pollution standards that her state is close to approving even as the EPA mulls federal guidelines that could affect the rest of the country. Michigan has been wrangling with the Pentagon about the handling of pollution at current and former bases there.

“EPA has not done its job in setting a standard for what is safe and what is not safe, so you can’t live up to that standard that doesn’t exist,” Slotkin said.

“Will you commit to living up to Michigan’s statewide standards?” she asked.

“I think if that is our regulation driven by law we’d be required” to adhere, Esper said. “But let me come back and give you a formal answer.”

The imminent Pentagon report is the culmination of work by a task force Esper created immediately after his confirmation last summer to review the environmental impact of the firefighting foam containing PFAS. It could include new estimates of how many facilities are affected and whether progress is being made on replacing the dangerous chemicals in firefighting foam.

National alarm has been rising over widespread PFAS pollution and its health effects, especially on and around military bases across the U.S. where the foam was used. Congress is pushing the Pentagon to phase out PFAS foam by 2024 and states are moving to enact their own pollution standards.

“You’ll get my report soon in terms of where we stand on this,” Esper told the House Armed Services Committee during a public hearing. “They have been working for some time now, giving me some updates.”

The Pentagon has estimated it has 401 potentially polluted sites that could require $2 billion for cleanup. But in November the former director of the PFAS task force, Bob McMahon, said the estimated number of sites was likely to rise in the final report.

The task force’s nationwide search, including discussions with local fire departments, had also failed to find safe alternatives to PFAS for an equally effective firefighting foam, McMahon said at the time. That could be key for military forces that handle large amounts of aircraft fuel and munitions that are highly volatile.

“We need to get a replacement for the firefighting foam. No. 2, we need to make sure we understand the impacts on our people, our communities, people outside our gate,” Esper testified. “No. 3, we need to just keep moving forward with regard understanding how to mitigate it going forward.”

To contact the editors responsible for this story: at phendrie@bgov.com; at jmorris@bgov.com